This story is an excerpt from Unwinnable Monthly #99. If you like what you see, grab the magazine for less than ten dollars, or subscribe and get all future magazines for half price. 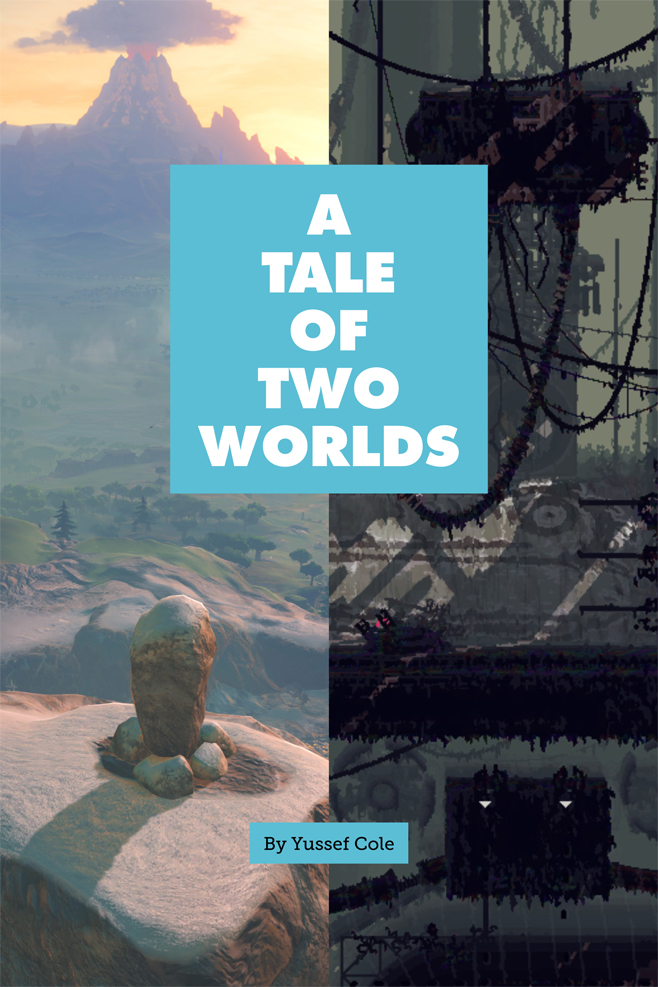 2017 saw two games released that both share a focus on nature and the environment: Nintendo’s The Legend of Zelda: Breath of the Wild, and Videocult’s Rain World. Where Rain World bases its setting in a ruined industrial wasteland, intermittently deluged with catastrophic rainstorms, Breath of the Wild erects an idyllic nature park above long defunct, prehistoric detritus – like a Hyrulean version of NYC’s High Line.

The characters you control in each game differ just as dramatically. Breath of the Wild’s Link is the only one of the two protagonists who can arguably be considered a traditional “hero.” He is the chosen one, blessed with a clear calling and bountiful gifts to assist him on his journey, which culminates in saving a princess from her castle. Rain World’s slugcat, on the other hand, is a “soft squishy little creature,” according to the developers, and exists in close proximity to the bottom of the food chain. Unlike Link, the slugcat isn’t a hero, has no clear goal and little direction. Instead, it simply has the imperative to survive; and is driven forward by the desperate scarcity of resources (and preponderance of enemies) each area has to offer.

The gulf between the slugcat and Link closely resembles the one between humanity and what we consider the “lesser” species of Earth. In our eyes, the natural world is, and has always been, a resource to be exploited; ingredients for a tasty omelet, raw material for boots, greaves or a shiny new chest plate. Breath of the Wild buys into this fantasy, offering up its bottomless cornucopia for the player’s delight. Rain World, in placing the player’s point of view behind the eyes of a small defenseless animal, uses its speculative future to subvert this fantasy of player empowerment, one that is, by far, the status quo in games.

The virtual fantasies we create have a way of reflecting our priorities. 2017, much like the years that came before it, featured ever more frantic and acute warnings of approaching climate change. It was also the year the U.S. government continued to dig in its heels against those warning in petty acts of shortsighted rejection. Escapism through games can be a comforting retreat amid these stressful developments, but there’s also value in engaging with games that highlight our effect on the world around us in contrast to games that unquestioningly reinforce our assumed dominance. It’s this privileged outlook, after all, this treatment of the natural world as limitless raw material, that will ultimately transform our planet into one that looks a lot closer to Rain World’s ruined toxic wastes than Breath of the Wild’s pastoral meadows. The longer we heedlessly play the hero, the more we increase the likelihood of a future with no heroes at all…

You’ve been reading an excerpt from Unwinnable Monthly Issue 99.

Breath of the Wild, rain world