I opened and closed my review of the first volume of Flying Witch with a caution about the dangers of its sedate style of storytelling. Wondering if my obsession with it, my reliance on it for any semblance of comfort during my commutes, signaled a sea-change in my own reading habits I should be cautious about. A melodramatic warning, admittedly – intentionally – but one that felt relevant at a time when my reading, viewing and listening habits had declined as precipitously as my lifestyle.

That caution still remains, more extreme than before, even if the series has changed a bit. The new additions to the cast such as fortune-telling weredog Inukai and her pet hamster add, with their frustrated dithering, a much-needed energy that plays nicely off the Makoto, Kei and Chinatsu trio’s lackadaisical attitude. Nice as it has been to watch the trio pal chase pheasants, fry up roadside butterbur shoots and deal with the proper etiquette for greeting supernatural messengers, the teeniest bit of conflict – of comedic tension – feels so welcome when it does appear that it’s almost impossible to believe the series had traipsed along without it.

It’s not that The Flying Witch needs conflict. Not every story does, contrary to what the hacks insist. Nor that conflicts which do exist need grand personal or political stakes. As a slice-of-life, Flying Witch practices a form of magic as subtle as those its characters do: it hopes to coax lips sagging under the weight of a long day at the office up into a smile, to tickle out a sensible chuckle from the reader stuck in between surly subway companions on a long commute on a damp morning. To match these goals it exercises modest methods: lightly comic situations, small ironies, cute observations, charming character designs. If it won’t reveal the secret truths of the world as Crowley and other classic magicians hoped, well, that was never its ambition. It’s insubstantial, lighter than air, colorless, the pleasure of a cool breeze on a summer day two degrees right of “too hot.” 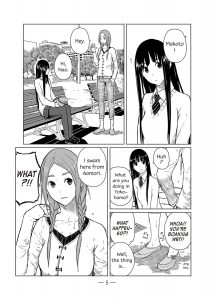 Only, ambition is necessary in art. Series that seem superficially similar and yet retain their appeal work for as long as they do because they have some vision of what they can be and an idea of how to work towards that. A four-panel gag strip such as Azumanga Daioh, perhaps the best known slice-of-life manga in America, still garners fans and accolades because it knew how best to use its limited structure to tell perfectly self-contained jokes that might also build atop other, later bits. Meanwhile the more absurd manga comedies, such as Nicijou and Cromartie Highschool, know exactly how to keep upping their own absurd stakes and sensibilities at just the right moment. These series have a sense of identity informed by their desires, however modest those desires might be, which in turn allows them to reveal something of the world’s own comedic potential, modest though these little truths might be.

Flying Witch, by contrast, lacks any ambition at all, or at least any clear ambition. It does make overtures to saying something about the value of observing the world around the way it chooses to downplay the sensational aspects of magic to focus on the delights of simple country living — the way it asks us to pay attention to the pleasures of taste and sight we find in road side plants, in the way it invests magical significance and elements into even the most mundane elements of the world—and in the way Kei’s older sister Akane warns aspiring-witch Chinatsu that failing to become a real witch might make life as a normal person difficult. Yet this seems antithetical to the way the story wants to remove us so completely from every other element of our world. There’s no doubt that the kind of idyllic Japanese rural village presented here matches somebody’s experience of the world, but it’s impossible to believe that even in these quiet rural settings tranquility should reign so completely. Isn’t it, by giving us even this little bit of magic and asking for our indulgence, making witches of us all, spoiling the clangor and clamor of the lives most of us live shuttling between work and home, dealing with the compounding stress of ever-more complex lives? There’s something both confused and confusing at the heart of Flying Witch that keeps it from discovering its own designs, and so leaves it and readers both wandering where it might go from here and what of it they should be following, if anything.