Pastiche is an aspect of post-modernism that involves borrowing from pre-existing aesthetics, cultures and time-periods when creating new work. It’s “the imitation of a peculiar or unique style, the wearing of a stylistic mask, speech in a dead language,” as Frederic Jameson writes in his essay, Postmodernism and Consumer Society. A post-modern artwork that uses pastiche presents an ahistorical experience, built from imagery that is isolated from its own history and context.

Jack King-Spooner’s Dujanah is an exercise in pastiche and post-modernism. It follows in the structural footsteps of King-Spooner’s previous game, Beeswing, delivering a series of narrative vignettes, told through the characters that populate King-Spooner’s surrealist worlds. Where Beeswing is firmly rooted in the Scottish villages and footpaths of King-Spooner’s lived experience, Dujanah is set in an amalgam of Middle Eastern imagery and tropes. It follows the story of a Muslim woman, Dujanah, who is on a quest to uncover the whereabouts of her missing husband and child, killed in an introductory scene by a drone strike. The game uses the fictionalized setting to explore themes of occupation, revenge and death.

Dujanah’s quest takes her to a jingoistic (yet oddly accessible) military base, an underground lab where a recluse builds an army of suicidal robots in order to better understand death and a village full of rock venues and spider-people. Though the western military presence casts a shadow over much of Dujanah’s journey, King-Spooner admits the game would likely have looked much the same even if it hadn’t been set in a fictional Middle East: “I can (just about) imagine the game being set anywhere. There are strong hints in the game of real places (Afghanistan, Algeria, New Mexico) but I opted for the artistic liberties of a fictional setting.”

When placed together, these disparate cultures and locations create the effect of being in a non-place. The reverb-heavy guitar riffs that would accompany a new wave Western like Six-String Samurai, transition to more traditionally orientalist motifs as your character leaves the world map and enters a North African-styled village. Characters speak of middle-class amenities and gather for Lamaze-like pregnancy classes, despite living in ostensible pre-modernity. And though Dujanah covers up with the hijab, we hear no call to prayer, see no mosques and rarely hear Islam explicitly mentioned, despite it being the primary religion of the setting.

Though Dujanah may be a non-place, there are endless examples of real places experiencing the real pain of occupation. Palestine is in the midst of violent protests after Trump brazenly declared Jerusalem Israel’s capital. Yemen faces famine and epidemic, thanks to a U.S.-backed Saudi incursion. Events such as these surely inspire the mood and imagery of the game, but because it is set in such a detached and hodgepodge setting, Dujanah is unable to deliver an impactful vision of what it means to be occupied. The military, its drones and the grieving families they produce, are all reduced to symbols and metaphors, there to help the player explore metaphysical themes that could have been represented in any number of other ways.

There’s a responsibility that comes with using the art, language and symbolism of another culture. More steps are involved than plucking it from a gallery, music concert or book, and dropping it into a game – especially when you are approaching a culture that isn’t your own, especially when that culture has so often been exotified and appropriated in the past. 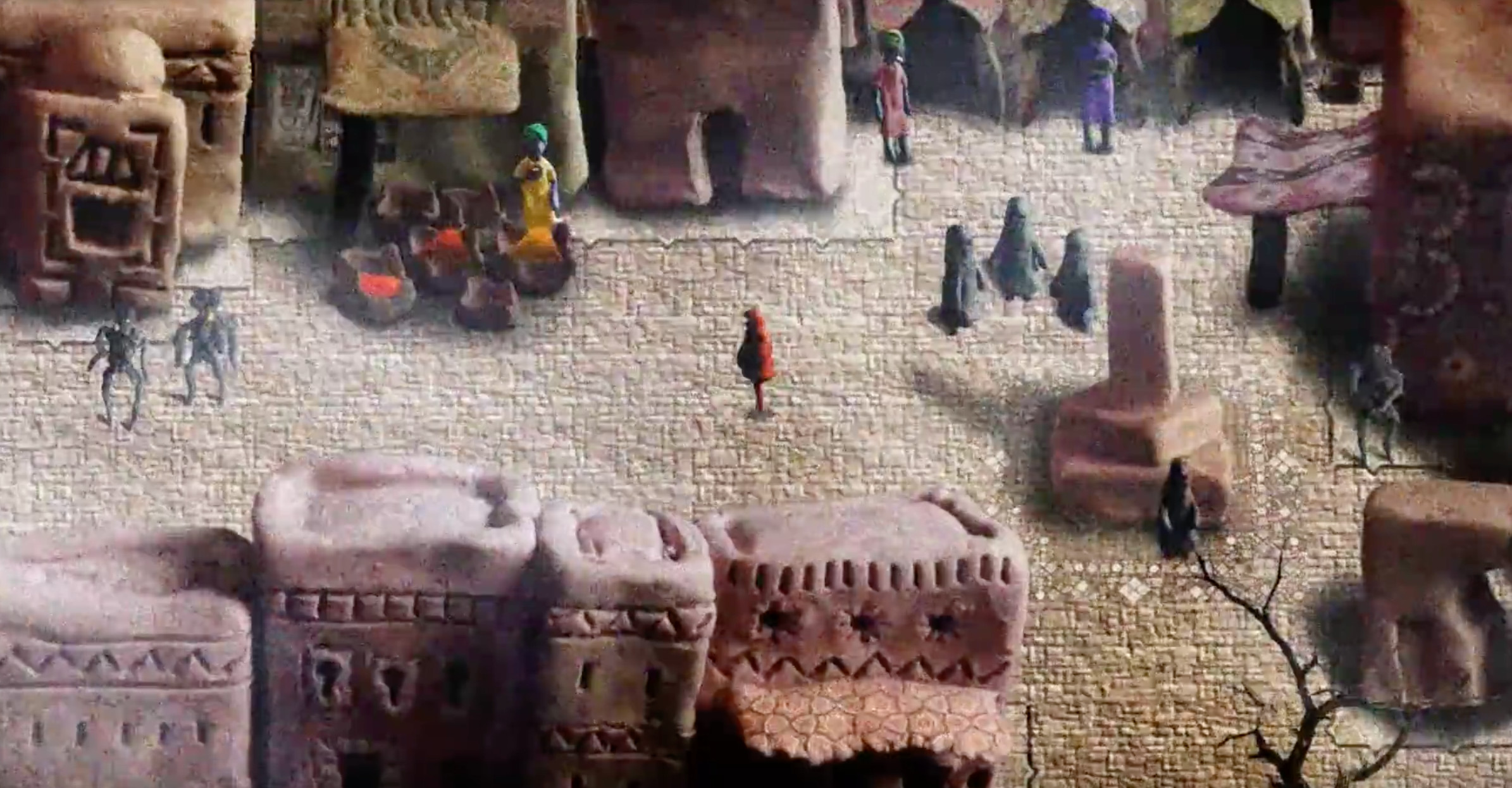 The upcoming game Donut County, by Ben Esposito, was originally called Kachina, and featured Native-American-inspired artwork like totem poles and carved statues. After being called out for his ignorance on the subject by a teacher writing for the American Indians In Children’s Literature website, Esposito decided he would prove her wrong by properly researching the game’s visual influences. After reaching out to members of the Hopi tribe for help, he realized, “A lot of what I was doing was hurting them. I couldn’t do it justice, because they didn’t want me to do it justice.” Ultimately, he concluded that, “if it’s really important to tell someone’s narrative,” to “let them tell it,” and changed the game’s art style, setting and name.

After all, according to Esposito, “research does not equal lived experience.” There’s something uniquely compelling about playing a game that’s solidly about a place and an experience as opposed to art which has been “driven back inside the mind,” and which can “no longer look directly out of its eyes at the real world for the referent but must, as in Plato’s cave, trace its mental images of the world on its confining walls.” as Jameson writes in his essay.

Comparing Dujanah to its predecessor, Beeswing highlights this distinction. Beeswing exists on a level that is personal and authentic, rather than symbolic. You play a young man as he explores the town he grew up in, talking to neighbors and old friends. You brush the dust off the keys of a piano that’s been in your home since childhood, as the tinkling of the real life version of the instrument plays over the game’s soundtrack. You wander around the woods, run into a friend and have an awkward conversation. You pass through a flock of sheep on the way to visiting an old folks’ home, where those closest to death slowly fade away. It’s a slow meandering walk through an old, deeply familiar neighborhood. The wider scope of Dujanah – racing around the vast desert on a motorbike and popping back and forth between different locales – contrasts with a narrow focus on small towns and people your character has known for decades. Beeswing allows more space to breath, and to relate to each of the characters you meet and speak with. These stories resonate not only because of the game’s intimate focus but because they so seamlessly share the tone and texture of the environment they arise out of – they truly could not have been told anywhere else.

In relying on pastiche and by separating the environment from real people and real stories, Dujanah is unable to connect in as meaningful a way. It remains successful as a window into King-Spooner’s vivid imagination shone through a prism of collected Middle Eastern artifacts and orientalist imagery. There is still value in witnessing the results of that refracted image: the “Caves of Dujjal” arcade game-within-a-game which resembles an EDM remix of Prince of Persia; the quiet and self-reflective artist’s gallery tucked away in the spider cave; the solemn graveyard and the game’s thoughtful exploration of humanity’s relationship with death. But like all pastiche, these images wind up eliding and obfuscating their inspired setting, choosing instead to wear it like a patchwork robe. As a result, Beeswing’s personality and authenticity evade Dujanah, which chooses, instead, to tell a story not about the Middle East, but with it, and ultimately through it – leaving the personal, honest narratives that could have been far behind.