Donut County, the new physics game where you play as a hole in the ground, is a satisfying exercise in puzzle-based destruction. It’s also a game about gentrification: Raccoons have invaded the town and they suck all of its familiar elements into a hole. “Raccoons are these creatures that are extremely adaptable to a human environment, and they seem kind of harmless and cute, and then all of a sudden they run the place,” said creator Ben Esposito. Donut County’s residents get stuck 999 feet below the earth’s surface (incidentally discovering that the earth is hollow), their town destroyed.

Mira is a human who works with the invading raccoons at their start-up donut shop. She’s particularly close friends with a raccoon named BK – who happens to be the raccoon using an app to navigate the hole (a.k.a. “donut”) and swallow up the town. Mira doesn’t initially realize that BK is the one creating these holes, although she’s suspicious.

The game opens at Mira’s house, where Mira sits in bed feeding bread to a golden-brown French Bulldog. BK texts, “when are you coming into work?? im BORED!!!”

“[C]ome to the donut shop,” BK counters, “and stop feeding your dog bread.”

“He needs bread to live, BK. He’s a certified loaf.” 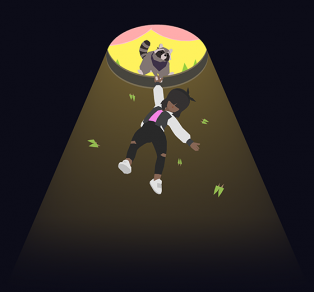 As you can see, the game quickly establishes that Mira is The Best. Don’t we all dream of lounging around with cute dogs and bread loaves while exchanging witty banter with our friends? This isn’t just me, right?

And even without the witty banter, Mira’s Best-ness radiates from the room itself. A guitar and amp sit next to her bed; she decorates with cactuses and a donut-shaped curtain wand; a poster of Patti Smith’s Horses hangs in the background. I’m a sucker for punk rock appearances in games – whether they’re subtle, like Mira’s Patti Smith poster, or overt, like the riot grrrl cassette tapes in Gone Home. Either way, more of that, please.

You may have also noticed that I’m fixated on characters’ attire. Chloe Price, Bea Santello, Phase Scout Jess, Damien Bloodmarch all appealed for their style, among other reasons. Mira has an incredibly strong look. For a game in which characters only get one outfit, it means something when I say that Mira’s style is perfection. She wears a black and white bomber jacket (*ahem,* not unlike a bomber owned by yours truly – except mine obviously has a skeleton on it), ripped black jeans, and a bow in her hair. She’s probably an Instagram influencer.

The plot thickens quickly. Once all the residents of Donut County are stuck in their underground cavern, Mira spends a lot of time trying to get BK to admit that he destroyed the town – that their predicament is his fault. BK rigorously denies that he’s done anything wrong, and the player must complete physics puzzles to recreate the scenes in which BK destroyed Donut County’s homes and businesses. The proof is in the flashbacks.

What’s great about Mira – in addition to her look – is her unwillingness to take any shit. In one pre-destruction Donut County flashback, BK is excited because he’s leveled up enough in his app to unlock a quadcopter – and I related to his meta excitement because I want every achievement, always.

What’s great about Mira – in addition to her look – is her unwillingness to take any shit.

Mira doesn’t share his enthusiasm. She confronts BK about ruining her town and smashes the quadcopter in glorious retribution. “How can you brag about this stupid toy,” she yells, “when you got it by destroying our friends’ homes??”

In atypical videogame fashion, Mira doesn’t attempt to punish BK by kicking his ass (although she threatens to), but by getting him to admit that he’s done shitty things, an act that feels particularly relevant in our sociopolitical climate. And in an equally relevant series of cutscenes, BK sidesteps responsibility (“I’ve never destroyed anything!!! I’m kind,” “I’m the victim,” “I’m innocent!!”).

Spoilers ahead: Mira perseveres and, eventually, makes it to Raccoon HQ, home of BK’s boss – the Trash King. After Mira puzzles, battles and quadcopter-smashes her way through Raccoon HQ, BK finally expresses contrition. “I don’t blame you for everything that raccoons do,” Mira tells him. “But if you want to be friends with me, don’t make your guilt my problem.”