Like every other child who grew up in the late 90s and early 00s with their attention split between videogames and anime, the announcement of Arc System Works’ Dragon Ball FighterZ filled me with an exhilaration hard to describe to anyone beyond that particular milieu but instantly familiar to my peers. Dragon Ball Z was the ur-text of our boyhood, the first series to mesh the power fantasies that drove us to wrestling with an aesthetic and a mythology that matched our hyperactive imaginations. For months our playgrounds turned into battlegrounds where we acted out our own incomprehensible sagas and shouted out the names of our own pet variations on ki blasts; when, finally, that became a bore, when we were too cool to playact but never too cool for Dragon Ball Z, the internet was there to reveal to us that the series had spawned a legion of fighting games in Japan. 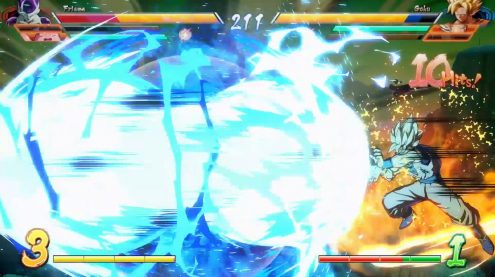 The problem was that not a one of these titles satisfied us. They were too slow, too stilted, too ugly, too choppy: what good was a Dragon Ball Z game when a Galick Gun landed with all the force of a soppy sponge and flight felt leaden? It wouldn’t be until the release of Marvel vs. Capcom 2 that we felt we finally had a videogame equal to our hopes, to our need for frenetic, team-based combat, and even that wasn’t quite right. It was lacking the heart that brought us to Dragon Ball Z in the first place, the elaborate mythos and heated rivalries and the soap-operatics that made it all seem so much larger than a bunch of brightly colored thugs pummeling each other to death. Like the much-joked about literati who thumbed the pages of Playboy in search of the articles and the latest Nabokov short-story, we were watching Dragon Ball Z for the story. The light-show was just something to dazzle the plebes while the rest of us – the real fans – mulled and debated over motivations, clashing philosophies, character.

Not that I’d thought this for years – I’d long ago written off my young love for Dragon Ball Z as stupid– but the early footage of Arc System Works’ newest fighter so elated me that I had to wonder if it wasn’t my cynical distance from anything that even smelled of nostalgia that had me sneering at what I’d once valued so highly. Maybe I was depriving myself of a classic: wasn’t Dragon Ball Z gospel to the authors of One Piece, Toriko, Yuyu Hakusho and a dozen other shonen series I loved? Weren’t there people my age – friends and peers I respected – who still loved it? Surely if they could find value in it, I could, too. Maybe I had just dismissed it for the sixteen years since I’d last seen it out of a childish desire to seem adult. Maybe I’d missed something inventive in Akira Toriyama’s storytelling. Maybe I’d overlooked a million subtle pleasures of style and art that made up for more salient flaws. My elations and my doubts (and a major sale on manga at Barnes and Noble) were enough to convince me to give my childhood favorite another try.

Maybe I should have trusted myself. Maybe young Austin was an idiot.

There are elements in Dragon Ball Z to appreciate, absolutely. Akira Toriyama’s art style – bold, clean and irrepressibly expressive – is a joy and almost alone what prevents the series ever turning into a complete slog. Every panel, every character design, every background seems to possess a personality far beyond what’s immediately apparent on the page: nobody but Toriayama seems able to give thirty different variations on a wasteland thirty different identities without ever sparing a single word to differentiate them. It may be that the simplicity of it all allows readers a chance to imprint their own interpretations. Or, more likely, it’s that Toriyama’s art style is perfectly calibrated. There’s a reason that most grotesque, strange and alien of his characters are the ones that stick in the mind, because they are the ones that look most like they belong in this cartoon world. It’s the same reason that the Buu arc is by far the best of the Dragon Ball Z stories. Toriyama’s designs lend themselves to nothing like they lend 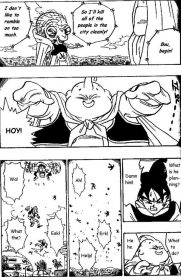 themselves to play and nowhere is that element so pronounced as in those final chapters. As a  perpetually grinning Plasticine monster-child whose idea of fun doesn’t discriminate much between building a house out of sand and unleashing global genocide, Buu embodies everything that makes the series work. When it’s not so worried about the life or death struggle of its characters that it can’t make fun of them – when there’s levity enough that a gumball pulverizing Buu seems like a fitting way to end a climactic fight – Dragon Ball Z is a kind of joy.

Frustratingly, though, it always stops just short of fully embracing these elements. Nor does it ever totally embrace the moments of horror evidenced in Cell’s first appearance or the hopelesnsness demonstrated in the fight against Freeza and his men. There’s something about Toriyama’s style that tells him he’s better playing things by halves, which is why there is always a new loophole that allows the dragonballs to save everybody or a new power-up that will turn the tide of battle around in a second. Ironically, this is one of the reason’s the anime succeeds so well where the manga fails (besides Shunsuke Kikuchi’s buoyant score): much as fans bemoan the glacial pace of the anime, it lent the series of upsets that characterize every fight in the series a weight missing entirely from the zippy manga.

Complain all you want about how the five minutes Freeza needed to destroy Namek can somehow be stretched across nearly three hundred minutes of screen time, but this decision to stretch out every scuffle allowed tension to accumulate. It allowed weight to gather. By contrast, the manga moves along at such a clip that no status quo 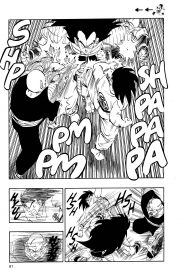 maintains much longer than a chapter. And the chapters are so simple in terms of twists and developments and dialogue and choreography that this means it’s rarely two or three minutes before a character recently trumpeted as the strongest the universe has ever seen is trounced by another character who’s only just broken through their power ceiling by deus ex machina. To which every character responds by dismissing the former strongest of all time as a weakling.

It’s a dizzying system, and with little variation in structure or pace it soon becomes wearying to boot. The thrill of meeting the new strongest turns to a joke when you realize that they’ll soon enough be demoted to fodder, and with no major visual cues to suggest that any one character really is stronger than another – after Namek the scale of destruction remains frustratingly localized, so much that even characters said to be millions of times stronger than Freeza seem capable of little more than Vegeta in the earliest parts of the story – and no major changes in strategy from one fight to the next – almost all of them consist of incessant poundings punctuated by a few last-second saves from side characters and, again, the every-present power-up – there’s no reason to keep following other than the reader’s own desire to see a work begun through to the end.

Toriyama, like his audience, wants to play, but for much of Dragon Ball Z he lacks the kind of heedless imagination that makes for the most fun. He’s the one child on the playground who’s eager to share his toys but insists he be the one to dictate your play despite knowing only how to bash the toys against each other mindlessly. It’s a blessing Arc Systems Works has been put in charge of Dragon Ball FighterZ, at least. Few other developers understand how to make fighting games as well as they do; imagine what they can accomplish when they put their endless imagination towards a playbox full of such wonderful toys.