Gravity defines the three main characters of Heaven Will Be Mine. Their factions war over its influence, wrenched apart by where humanity’s future lies. Its pull powers their “Ship-selves,” a more intimate name for their giant space-traveling mechs, so in synch, they may as well be second skins. And, like gravity, the three women find their fates drawn towards one another, again and again, no matter what side they choose. It’s destiny. Or maybe just physics.

Fans of developer Pillow Fight have been anticipating their second visual novel since the success of We Know the Devil in 2015, an equally gay tale about both the real and metaphysical horrors summer camp has to offer. Trading out ‘80s campy horror for ‘80 mecha anime and sci-fi, Heaven Will Be Mine threads the messy trails and tribulations of lesbian dating throughout a story that questions what it means to be human in the alien expanse of space. 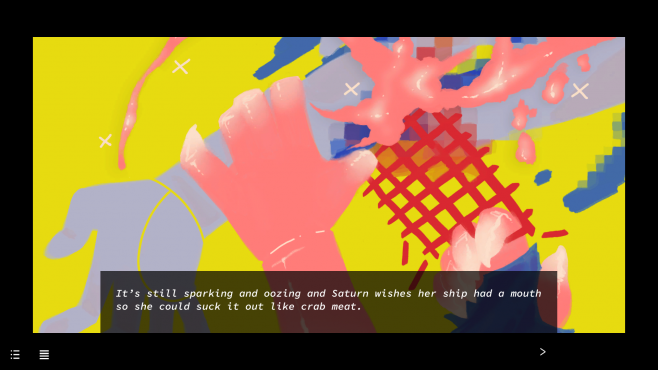 Set after the events of an alternate reality 1980s, the Cold War ended after humanity united against an extraterrestrial “Existential Threat,” launching a space race that settled humans in space stations, partially colonized Mars, and armed a generation of soldiers with giant robot armor. With the alien threat quickly defeated, however, humanity devolves again into internal squabbles, seeking a divide between those who stayed on Earth and those who ventured into space long enough to be considered aliens themselves.

Three groups emerge from the wreckage of in-fighting, each with a competing vision for their home planet’s future. And each sports a playable character: Luna-Terra, the stone-cold ace forever followed by her mech’s trail of artificial blood; Saturn, a headstrong but fiercely loyal pilot who’s always willing to take a second and flirt; and Pluto, the “mom” of the group, as skilled in weaponry as she is in reading those close to her.

In all honesty, the intricacies of their faction’s politics proved difficult to sift through. Pages upon pages of chat logs and emails greeted me after every mission, details I may appreciate on a second playthrough that were too dense for me to comprehend the first time around. But the romantic history between Heaven Will Be Mine’s protagonist came through loud and clear, and their interactions in every mission made me want to learn more and continue even as the main conflict sailed above my head (Science fiction makes my brain hurt, ok? Don’t judge). 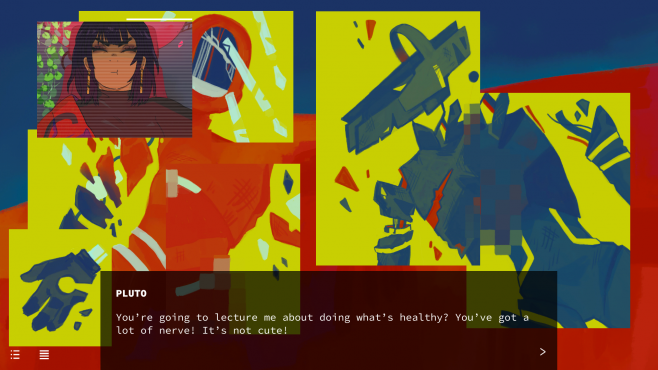 I much preferred the intricate metaphors of space and love weaved throughout the story, as if everyone spoke half in poetry, as cryptic as it was captivating. After all, space exploration is just a story, “A narration spun out of the ambient gravity of humans,” Saturn muses. And, just as matter is made up of atoms, “Culture is made of tiny humans, and enough of it together can decide what’s real and what isn’t,” a mission log reads. Characters move between casual dialogue and sophisticated figures of speech as easily as you would step off a subway platform, begging questions that ponder the ends of the universe or the meaning behind a flirtatious dig in a single breath.

Gravity lets the protagonists live beyond Earth’s reach, and its influence weighs heavy on the game’s protagonists. Every moment between them feels like something stolen, something impossible in the coldness of space. And so they relish in fighting, playing cat and mouse in the expanse because it’s another moment where they can see each other again. Ultimately, your choices determine the outcome of this interstellar war, and, more importantly, whose waiting for you once all the fighting’s subsided.

Heaven Will Be Mine is available on Itch.io and Steam.

E-soterica, Heaven Will Be Mine, Pillow Fight, We Know the Devil

For She Has Tasted the Fruit