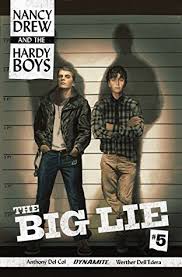 Here we are, the penultimate chapter of The Big Lie and things are picking up. Murder, intrigue, fist fights, bait and switch and some more intrigue.

Issue #5 starts with the aftermath of young Sam Rover’s murder, but big brothers Ricky and Teo don’t seem as fazed as they should be. Our brooding alpha teens, Frank and Joe Hardy, make up for the older Rovers’ lack of emotion and wind up throwing hands. I’m pretty sure Joe comes out on top here.

Nancy Drew, ever the pragmatist, tries to get the Hardy’s to see the big picture and keep them working with the Rovers for a bit longer, reminding them of the end game – finding out who is responsible for their dad’s death. But the boys go their own separate ways.

Both sides (Nancy and Frank on one, Joe on the other) find their own ways to get the mysterious drug supplier(s) to agree to a meet. Joe uses a little more of a mischievous plan, sneakily getting Chief Collig’s phone away from him in a crowded market. Nancy and Joe, still working with the Rovers, get the Rovers to do the asking. Everyone meets at the same place for the big reveal… and is attorney Carson Drew, Nancy’s father, the big bad?

Fans of the old Drew and Hardy stories won’t be disappointed with the entire saga of The Big Lie. Our heroes are in a more grown up world (murder, drug deals) but still use their preternatural detecting abilities, out foxing adults and police all over Bayport. Writer Anthony Del Col has done the young sleuths justice. Werther Dell’Edera’s art remains solid, and he continues to frame the scenes with cinematic gusto. I particularly noticed Stefano Simeone’s colors in issue #5, as there seems to be more daytime scenes in this issue. I forgot there can be daylight in mystery stories, especially after how dark issue #4 was. These scenes are suitably bright, but still have a bleakness fitting a murder mystery.

Something feels a little too pat about papa Drew being evil, so I’m anticipating some more swerves in the conclusion that issue #6 will be. Nancy still seems to have the key to some secret, so maybe she’s not as innocent as she seems. The pot boils… . See you all in four weeks!

I don’t really read X-Men books. I haven’t since All-New X-Men almost five years ago. Not that I don’t like them, I really do, but there was always…history in the way. Few books have as wide a cast and as long and deep a history as the X-Men. It’s why I never really got on the train and why I didn’t stay on very long as I did. It was too hard to keep track of who was doing what, where, why, and it’s also an expensive habit.

That being said, I picked up Astonishing X-Men #1 because I’m a sucker for a number one and Gambit is my favorite. The result, so far so good.

Charles Soule does himself a favor by really getting into things as fast as possible. The setup is relatively short and everyone gets a little introduction before we get into the meat of the issue.

It’s a strange, rag tag group that have all been enjoyable over the years in different iterations. Who knows if they have the chemistry down the stretch. That’s the tough part about these reviews, the series can go right off a cliff and you have to watch how excited I am right until the point it does.

That being said, Psylocke gets attacked psychically and she summons a rag tag group of X-Men to come help her. It kind of works. She’s safe. London doesn’t get totally destroyed. But the day isn’t saved. There’s a bigger bad lurking in the shadows and it’s up to this rag tag squad to go and stop that big bad.

Can they do it? Probably. Of course they can, that’s not really in any doubt. Everyone won’t get all blown up at the end and the world will be saved. Soule has plenty of great credits so let’s see what he can do. I wasn’t the biggest fan of Poe Dameron but I’m happy to be proved wrong.

Artist Jim Cheung does an amazing job. He doesn’t have or use a style that really leaps out to me as being unique or special but his art is incredibly clean and everything just looks really, really good. Let me stress that again, you won’t find the most unique art style here but Cheung brings the characters to life and that’s worth counting. It looks good, reads clean, and I’d buy more.I like to buy #1’s because they’re full of promise. With few exceptions, they’ve got places to grow to and they haven’t totally jumped the shark. There’s notable exceptions of awful arcs with awful beginnings but most of the time a solid #1 is an “all future, no past” type of experience. This one was pretty cool.