The following is an excerpt from Unwinnable Monthly Eighty-Eight. If you enjoy what you read, please consider purchasing the issue or subscribing.

Blackney often describes Dead Static Drive as a sort of X-Files monster-of-the-week scenario, where each town you visit has its own discrete mystery to unfold. In truth, though, that’s just a convenient shorthand. Most of his inspiration has come from horror short stories, a format he believes is perfect for the genre.

“It’s hard to sustain fear and tension after you’ve introduced it and the reader’s used to it,” Blackney tells me. “You want to get in there and surprise them and get them to be a bit spooked but then get out of there as well.”

In Blackney’s opinion, horror is at its best when it’s exploring a single idea. If that idea is drawn out too long, both the reader and the player figure out what’s coming around the next corner. They start to see the story purely in terms of narrative beats or, in the case of games, mechanics. With Dead Static Drive, he aims to subvert this. You won’t want to linger in the game’s twisted towns, not if you value your life. Death never sleeps, and neither do the game’s monsters, pushing you to refuel and move on before your pit stop becomes your grave. If you’re adventurous enough, you can even drive straight through towns without stopping. Pushing on has its own consequences, though.

“As you drive, you become more tired, but you also become more exhausted,” Blackney explains. “They’re two separate values the game keeps track of. If you drive between two or three towns, you get tired, you’ll feel like you need sleep, and you can go sleep and that will make you feel better. You can also drink coffee and push on. That makes you feel less tired, but it doesn’t make you feel any less exhausted.”
Eventually, if you keep pushing on, the world around you will start to change. NPCs will look like monsters, monsters will look like allies, and you’ll lose the ability to distinguish between good and bad. Blackney wants to mess with you, to stop giving you the kinds of messages you expect from a videogame. There won’t be a whole lot of fourth-wall breaking, but you will need to tread cautiously. 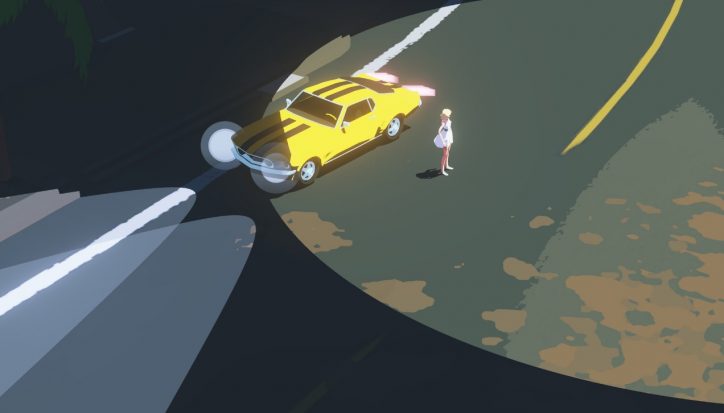 Of course, a good horror story needs islands of calm to break up its waves of terror. In Dead Static Drive, after surviving each location, there’ll be a transition sequence before the next town, where it’s just you, your car and the open road.

“I want that as a bit of a break period, so that if you left town and it was really intense, then you don’t suddenly get into a new intense moment,” Blackney says. “And if the player likes driving, then they’ll just be able to do that for a bit longer.”

I can vouch for how good the driving feels; I spent a lot of time just drifting up and down the highway in the demo build of Dead Static Drive. I expect to be pulling plenty of burnouts in the final game, nightmare creatures be damned.