Backflip Studios is at it again with their latest title, Army of Darkness Defense, which trades in garbage cans and paper balls for chainsaws and “boomsticks.” Mobile gaming quickly became a reputable arena for developers to blossom, with big hit games like Infinity Blade and Plants vs. Zombies. Conversely, the mobile gaming platform is probably most famous (or infamous really) for its certified time-wasters. Backflip studios brought a personal favorite time-waster of mine to the scene with Paper Toss. That game was simplicity at its best, and you could easily melt away hours and reduce any excruciating wait time at the DMV or dentist’s office.

Now, Army of Darkness Defense (with an HD version on the iPad) is your typical tower defense game, but you play out the final scenes from the Army of Darkness film as fan favorite Ash along with the help of Arthur’s army. Complete with soldier upgrades, power-ups for Ash (some of which I might add are HYSTERICAL) and an ever-growing hoard of Deadite attackers of all shapes and sizes, AoD Defense is a blast. You control the shotgun/chainsaw-wielding Ash as you attack the onslaught of enemies while summoning Arthur’s soldiers to aid you in battle.

Backflip equips you with the same battle accouterments you’d find in any other tower defense game: waves are announced mid level, in-game money is collected during battle and upgrades are purchased once levels are completed. The thing that really helps

this game out is Bruce Campbell’s contributions: the game’s opening cinematic features Campbell’s voiceover talent to explain the story, and he returns throughout with little quips and signature catchphrases: “Shop smart… shop S-Mart.” All in all, you could pick this game up and not put it down for hours. 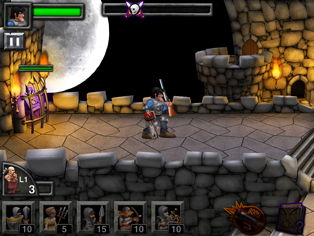 If you’re into tower defense games or suffer from an Evil Dead obsession like many of us, do yourself a favor and check out Army of Darkness Defense in the App Store.

If You’re Not Watching Ash vs Evil Dead, You’re Doing It Wrong

Well, We Warned You: Playing Horrified During a Pandemic
Previous Post