I’m not certain I would declare it the best manga brought to American shores in 2016 – let alone the best comic – but few releases last year thrilled me quite so much as Katsuhisa Kigitsu’s Franken Fran. No, it’s not as artistically daring as Shuzo Oshimi’s Happiness. Nor would I ever argue that it touches Inio Asano’s Goodnight Punpun or his masterful Girl on the Shore: it possess none of these works’ ambition or insight. All Franken Fran has to offer is a very, very strange kind of fun. But what a perfect fun it is.

Not a coherent narrative so much as a series of barely connected short stories, Franken Fran chronicles the life of Fran Madaraki, a reanimated corpse whose godlike skills as a surgeon and encyclopedic medical knowledge are offset by her inability to understand people and an incredibly literal approach to problem solving. When a blind artist comes to her seeking a new set of eyes, she gifts him a set so sensitive they can see the whole spectrum of light. The artist, of course, descends into insanity. An aging actress finds her desire for an anti-aging medicine granted, but the medicine had worked by strategically activating cancer cells. When she injects too much of it in a bid to return to her youth it turns all of her cells cancerous and transforms her into a massive tumor.

Most of the stories follow a similar structure, clearly aping “The Monkey’s Paw,” but to say that the various vignettes making up Franken Fran are told with a heavy moral hand would be making much of little. Rather, like Fran, who walks away from most situations utterly unaware of the human suffering she’s caused, author Kigitsu seems wholly uninterested in the morality of these tales. Though his work falls purely into the subgenre of body horror comedy that movies like Re-Animator and Society found so much fun in, it isn’t constrained by the kind of satirical vision that kept even those ribald works from crossing certain lines. Kigitsu doesn’t seem beholden to any taboos. 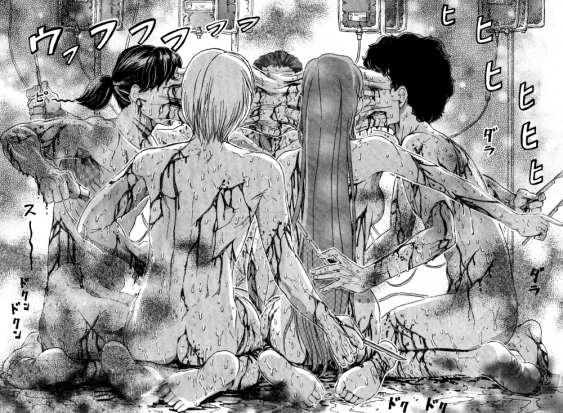 That isn’t to say his work is deliberately built to offend schlock like, say, The Human Centipede; Kigitisu isn’t saddled with the same basic misanthropy that motivates these sideshow curators. What drives him instead seems to be pure artistic curiosity, a suspicion borne out by the author’s notes at the back of each volume (“this is a story I did because I find the process of cell division to be deeply unpleasant”). He wants to see how far he can lean into an idea, regardless of whether or not his indulgence will tip it. These experiments aren’t always successful: they’re too risky to offer reliable enjoyment; more than a few seem so ill-formed and come to such jumbled ends they put the reader in mind of one of Fran’s own botched projects.

When they work, though, they come off with such a wicked charge that you feel yourself a first-hand participant in something delightfully profane. In one instance, a man-shaped colony of bugs revealed to be the Wandering Jew of apocrypha comes to Fran seeking a human body and, with it, the chance to finally die. In another a girl’s dying dog is given a second life when his brain is transferred into the body of a morbidly obese man. Kigitsu plays it to the maximum uncomfortable effect by showing the resuscitated “Honey” urinating in public, mauling muggers and even sleeping alongside the girl without once winking at readers to alleviate them of their discomfort.

His art is similarly unapologetic. The style is uniformly grimy, so much so that even those scenes free of gore are so spotty they look as though they’re covered in viscera; the inks seem as if they would smudge with a touch. But it’s no mistake. Kigitsu is pursuing an obvious effect with these and other techniques, and anyone who doubts that has only to look at the exacting details he bestows on the many, many visceral tableus in these pages. Few other artists are so unsparing in detail; few other artists posses the kind of joy for art Kigitsu has. Who else could draw a woman in the middle of a kind of macro mitosis, splitting from a lump of limbs and skin and intestines into two, with such love? Who else could find the hilarity in a group of four people fused together at the face engaged in masochistic stabbings, or a basement full of high school boys so horny they’d fuck a pheromone excreting blob until they died? Who else but an artist of singular talent could make this all such a riot? 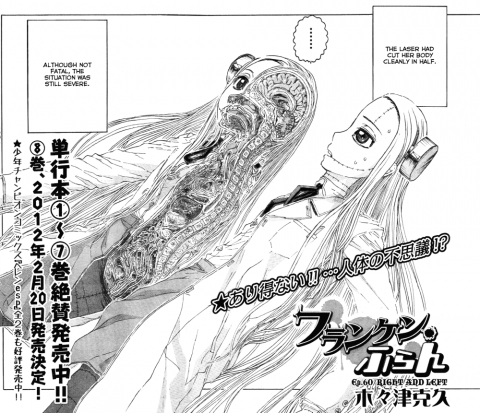 Kigitsu is possessed of a rare sensibility in the arts, one that may not always find what is most beautiful or trenchant but which seems perfectly attuned to discovering the strange and the grotesque with matchless aplomb. If his considerable talents aren’t being used to further some grand fantasy, it’d be absurd to argue that they’re wasted. Many of the most delightful discoveries were found by scientists at play in their own labs; the most joyous of art comes to us courtesy of creators willing to indulge what others see as a waste of time.