The devil has arrived, his feet coated in thick, black tar that mars the edges of a crisp white suit. On the ground below him is our hero, blood seeping noxiously across the floor of an ill lit room. It’s the end of the world and Constantine is lying down on the job.

Constantine came out in 2005 to mixed reviews and middling success. The movie was by no means a flop, and in recent years its attained a sort of
cult-like status. Bring the movie up on reddit and you’re bound to get plenty of comments that praise the adaptation while simultaneously bringing up
its primary fault.

The baggage of Constantine is the well-loved Hellblazer comic series that serves as the reference point for the film. To call Constantine a faithful adaptation to its source material would do a disservice to both media. Aside from the names of characters, Constantine’s affection for cigarettes and the Judeo-Christian mythology that informs them, they have little to do with each other. Keanu Reeves is not a wise-cracking, blonde man from Liverpool, and thankfully we do not get a repeat of his Dracula British accent. In the place of a beloved comic book character is a sour, brunette American psychic who has found himself at the end of the line.

If you remove Constantine from its source material you are left with a fantasy noir that delights in small dark spaces and the internal horrors of the demons within. 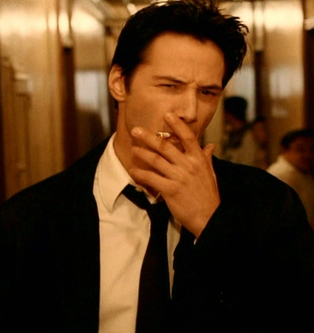 The film relies on the tropes of a genre whose heydey was Humphrey Bogart, a Maltese Falcon and those slippery, treacherous dames. This was the era of smart men who always knew more of what was going on then they’d let on, and the capable women who could usually handle their own. It’s combined with a sub-genre of fantasy/science fiction and horror whose rank are resplendent with movies like Legion, Underworld, & The Last Witchhunter.

Constantine is based loosely off the arc from the Hellblazer comic series known as “Dangerous Habits” in which our titular hero finds himself diagnosed with terminal lung cancer. What a demon couldn’t kill, a lifetime of smoking can. This foundation is quickly ignored, since the comic series involves deals with the devil and a certain level of badass assholery that Keanu Reeves is ill equipped to perform. Instead, we are treated to a slower drive into the green-tinged atmosphere of the film world. While he attempts to wheel and deal with an Angel of the Lord (the impeccably cast Tilda Swinton), there is a smokers cough finality to the situation.

Constantine is going to die, and when he does, he’s going to Hell. He’s the one soul the devil himself would come to collect.

There’s a lack of agency to his character. He’s got the power, and he knows more than anyone else in the room, but he can’t stop his own death. He can’t save enough souls to get himself into Heaven. In this sense, he’s a call back to the PI’s that dominated the Hammett novels. Smarter than everyone else, a real menace to the bureaucracy and incapable of any real change.

This draws in a quieter sort of action. A few set pieces, a sprinkler system or a pair of holy brass knuckles, pop up between the infernal quietness of Reeves performance. He’s a dying man making his final arrangements, not Rambo. Constantine is defined by the still moments of a cigarette burning on a nightstand, or the subtle turnings of pin setting 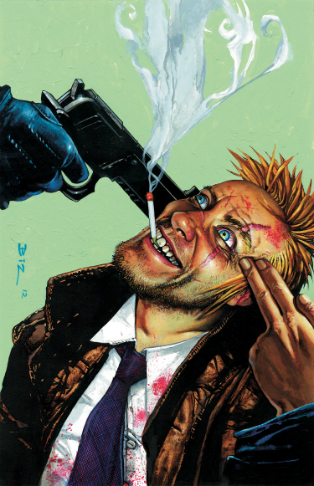 machines, not on high octane action sequences. There’s something decidedly old fashioned and well-crafted about it that elevate it above its peers. I, Frankenstein this is not.

It’s been ten years since Constantine premiered and maybe it’s time to forgive it of its one great sin: not being a faithful adaptation of the source material. Within its dark alleys we find one of the greatest representations of the Devil and an indifferent God, the futile struggles of a man just trying to get out of the one place he knows that he’s bound to go. It’s a film that has been relegated to late night runs on basic cable, derided and forgotten.

What is Bob Ross Doing on Twitch?