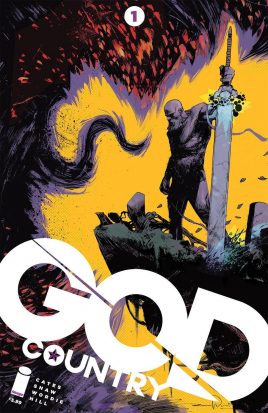 Donny Cates and Geoff Shaw’s God Country mixes mythology with a good old fashioned American Tall Tale. However, the story doesn’t take place in some abstract realm or long-forgotten time. God Country takes place present day Texas. In a move reminiscent of Neil Gaiman’s American Gods, Cates and Shaw begin their story not with the slaying of monsters, but with a tragedy all too familiar – a terminally ill parent.

Emmett Quinlan has Alzheimer’s Disease. Emmett’s son, Roy, and his family moved back to West Texas to keep an eye on Emmett after his wife died. Sadly, he is beyond their help as he is prone to violent outbursts that have grown to be too much for even the local sheriff to handle. It’s an all too familiar heartbreaking story about the strain illness puts on a family. Cates, Shaw and colorist Jason Wordie tell a tale about a family on the brink of falling apart.

Then a big ol’ supernatural tornado hits and the Quinlans’ world gets a whole lot weirder.

God Country # 1 is a gutsy first issue. Cates and Shaw take the time to introduce the reader to their characters and give us a glimpse of the book’s higher concept. The book is grounded in reality before the big honkin’ sword shows up. Cates’ captures each character’s voice in their dialogue. Shaw’s storytelling and sprawling landscapes establish a lonesome quiet west. The Quilans are at their last proverbial rope in a land so vast it could swallow them whole. Then that tornado shows up.

The tornado deposits not only a giant sword, but also a bunch of otherworldly monsters. As long as he holds the sword, Emmett has all his faculties and he’s the only one who can save Texas and probably the world from whatever clawed its way through the chaos.

God Country # 1 goes from Cormac McCarthy to Jack Kirby in 24 pages. I’ve been following Cates and Shaw’s work since The Paybacks (Seriously, buy back on that book. Cates, Shaw and co-writer Eliot Rahal kill it with that comic). God Country is one of those books that’s going to sneak up on the comics scene. It’s already gone to second print! It’s a beautiful comic and it deserves to be one of the biggest books of the year. 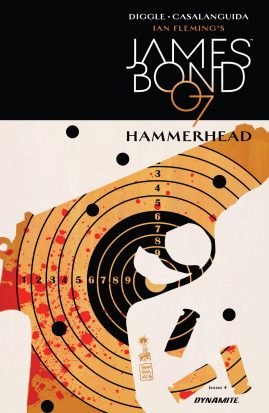 Hammerhead is a lovable, bombast fueled race. Its comic booky in a way that Vargr and Eidolon weren’t. And that isn’t to say that it’s bad in any way shape or form. It’s a romp, not a slow boiler. It’s filled with set pieces, twists, and tried and true conventions. And that’s lovely.

I’ve talked before about a Bond for all seasons. Indeed, throughout history we’ve been treated to a James Bond for every political climate and conflict. Hammerhead fits nicely in between techno-thriller and modern blockbuster. It’s become a Bond series that’s less afraid of engaging with tropes or having to engage with them in special ways. That might sound like a knock but Ian Fleming wasn’t and look how things turned out.

In fact, it’s because of this fearlessness to rely on convention that Hammerhead is fun for me to read. I’m looking for the turn, waiting for a character to be revealed as the Big Bad. Hammerhead #4 stylishly rewards my intuition. In fact, characters literally talk about having their intuition rewarded or betrayed. It knows but it doesn’t feel like it knows. Perhaps it doesn’t’ care.

The Smuggler with the heart of gold, the femme fatale, the magic car, it’s all here. It’s a James Bond story where he literally and figuratively fights a shark. Why shouldn’t it embrace the tropes?

And it looks good too. I love the dark inks all over this issue. It’s reminiscent of old newspaper print comics without so many blues. As a person who always had a fine appreciation for Batman and the like I love seeing Bond at night skulking around in a collared shirt and tie or a tactical turtle neck.

What I’ve yet to really see from Hammerhead is a turn towards some of the side characters. We see M and Moneypenny a lot but we haven’t gotten to know them. Most Bond side characters are throwaways who find themselves either killed or otherwise written out. Not these two. What are they like?

I know I was down on James Bond: Felix Leiter but why shouldn’t we know more about M or Moneypenny given how prominent they are? Right now it feels like a well of untapped potential. Or at least a bucket worth dumping out in one issue or another.

All in all, pretty standard fare. And, as I’ve been saying, that’s fine. We’ve got to be close to the climax, right? Probably two issues away? Plenty of time to do something crazy and flip the table. The climax should be brutal, include a close call, reveal a betrayal and maybe another actual shark fight. Maybe.