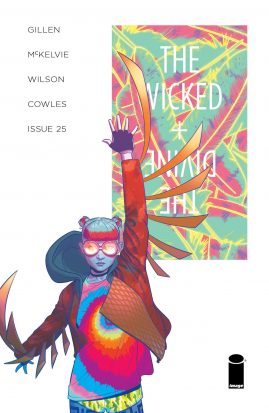 As much as I’ve praised Jamie McKelvie’s art with this column, I don’t think I’ve ever talked specifically about his genius handling of the characters’ facial expressions. Like every book on my pull-list, I read WicDiv digitally, and I always use guided view for my first read-through, just so I can get every detail in every grin and grimace. Laura has a panel on page six that’s  a delicious combination of the two, and seeing it blown up on my reader gave me actual chills.

Laura and her newly-formed god-powers have been the main focus of the Imperial Phase arc, and this third chapter is no exception. The main focus is on Laura convincing Woden to at least appear to be not so much of a complete choad, and after some rough persuasion, she succeeds a bit. He’s still a dick but he does release his Valkyries from the bonds of their contracts.

That rough persuasion is a highlight of the issue, with Laura’s tentacles dragging Woden down to the Underworld, where we’re treated to the visual twin of Laura’s own visit in issue #20. As ever, Matthew Wilson’s colors shine (er, glow, really) in this entire sequence, especially during Woden’s initial descent into the darkness.

Another highlight is a too-brief scene of domestic tranquility featuring Baal, Laura and Minerva. The trio is watching some evening TV when the now-deceased big baddie Ananke’s visage graces the screen. Baal suggests changing the channels, but Minerva declines, flatly stating “anger helps.” Too true, little goddess of wisdom, too true.

The issue ends shortly after this interlude, with the introduction of a dark force the likes of which we haven’t seen, suggesting that Ananke’s and/or Laura’s altered roles in this divine play have caused something truly dangerous to be brought forth.

Have Laura’s many round-trips to the Underworld caused something to escape? Could this be why Ananke referred to Laura as the destroyer? Or was Ananke’s evil (she was definitely just about to kill a little girl when she died, y’all) yet immortal presence the only thing keeping this new threat from breaking into our world? Is every one of these gods some damned frustrating mix of good and bad? God, can they be any more human? 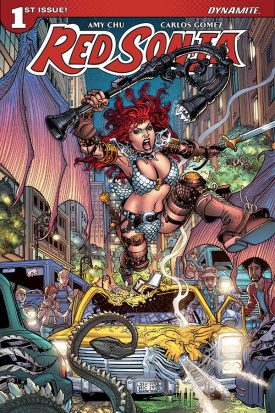 In a page taken from such classic comics as Conan the Barbarian’s appearances in What If? #’s 13 and 43 or the Spider-Man/Red Sonja series, a fantasy character from millennia ago shows up in the modern day in this first issue of a new Red Sonja series! While this issue seems to play it a little more serious and is slightly less comedic as those past stories, it still makes for a fun read.

Essentially the plot is that some NYPD officers show up in the midst of a blizzard to respond to a “10-96” (Mentally Unstable Subject). To clarify there is a naked redheaded woman swinging a sword around on the streets of Manhattan while screaming things in an ancient tongue. In reality it’s a redhead familiar to fantasy fans that is actually in a chainmail bikini swinging a sword around and yelling things in what can be guessed to be the language of her native Hykania. It is initially via an officer named Max’s POV that we are introduced to Sonja. Max can speak some of Sonja’s ancient language, which he says he learned from his mother.

What we learn from her expositional rants is that she was fighting evil wizard Kulan Gath and his beast one moment thousands of years ago, and the next moment she found herself awake in our strange land, 21st century Manhattan. As the story unfolds we learn that sorcery is afoot, and that this modern day New York City is different from the one we know. There are a number of things in this issue that could provide set up for an entertaining miniseries, and a change of status quo for the somewhat familiar fantasy character Red Sonja provides a great point of entry for new readers, I among them.

Carlos Gomez does a fine job on art duties, keeping this version of Manhattan in the background of most of the frames, allowing it to be a character in this story as well. This is a tricky task when eyes tend to focus on the voluptuous woman in the chain mail bikini for most of the panels. This is in no small part due to colorist work done by Mohan, as Sonja pops against the drab winter colors and monochrome uniforms of police and hospital workers nicely. She’s a stranger in a strange land, and these artistic choices reflect that.

Thanks to writer Amy Chu this issue moves at a speedy clip to set up the storyline, which include a lot of mysteries to be solved in subsequent issues. What is the nature of this New York City Sonja has awakened to? Is there a connection to her and the police officer Max? How is Kulan Gath still kicking  around thousands of years later? Will Sonja find pants in addition to her jacket to help cope with the snowstorm?

I have to say that I’ve not read many of Red Sonja’s adventures before, but this a great place to start!

I’ll admit to only having read a smattering of James Bond novels. They’re generally wonderful but prone to an officiousness that stems directly from Fleming’s own personal inadequacies. That’s why James Bond: Felix #1 is such a difficult issue for me. I’ve been reading the Dynamite James Bond properties as kind of a timeless impression of James Bond.

That’s how Bond’s been treated. He was a suave super spy, then a gritty hero, then a tortured loner. He’s gone through camp, grit, 90s bombast, the works. He’s malleable. That’s the point. Sure, Fleming had a vision and a goal but Fleming has also been dead for ages and so many other, occasionally better, writers have come to Bond and remade him.

So it was strange to see a one armed, one legged Felix Leiter. That’s a specific moment. That’s not timeless.

I’m interested by the idea of reclaiming Leiter. He’s kind of a bit player throughout all of the Bond properties. He’s the American Cousin. He’s the back up. He’s Robin. He’s not even cool Dick Grayson Robin, he’s Jason Todd.

Unfortunately, Leiter here reads a bit too much like Rick Deckard. He’s really hard boiled but he’s got robot parts. He’s seen some stuff. Bad stuff. Shark stuff. Maybe he just needs a cuddle. No, he just needs a drink.

But what made the runs like Vargr and Hammerhead interesting were the fresh takes. The dangerous directions not easily represented in the rest of the Bond-verse. Eidolon was a risk. Felix seems like it was re-branded.

Maybe that’ll change. It’s certainly not a bad hard boiled story but it’s not the kind of story I was expecting.

What does work for Felix #1 is the simple, beautiful way that the story is laid out. There’s no extravagance, no indulgence. The art is simple, majestic even. The panels too draw one through the story. They’re nearly invisible. They’re seamless.

On the whole, the issue doesn’t find it’s legs until late. It’s almost a Rogue One type story in the way that its breaks from the James Bond mold. But, unlike Rogue One, it doesn’t pull this off. We haven’t seen Leiter as strong enough to carry a story and without the final hook at the end, I’m not sure I’d come back for the next issue. That being said, the hook is a doozey and maybe it’s worth sticking around.

Pokémon Is Trapped In An Identity Crisis