The best of art justifies its own existence. It demands our attention not by teaching us something or working to improve the world, as the moralizers and sociologists posing as critics believe it must, but through dent of beauty. No doubt artists can use their work to make an argument, but if their arguments are to land with any force it is always by means of technique and artifice. Keats might have given truth short-shrift when he conflated it with the aesthetically pleasing, but the human mind has such a preference for the alluring that we make the same mistake ourselves, often daily. It would seem our memories only have room for the beautiful; everything else, no matter how well intentioned, is doomed to obscurity.

The first volume of Bungo Stray Dogs is not beautiful; it is not interesting. It is not even ugly: at least the ugly reminds of us of beauty’s absence. Bungo Stray Dogs is so nondescript one forgets they’re reading it even as their eyes glide over the pages. There is nothing for them to catch onto in Sango Harukawa’s flat art style, in the stale character designs that look left over from 2003 or in the workmanlike page and panel compositions. Nor is the action dynamic enough to sell the explosions, punches and flying bullets that punctuate these pages. Blows carry no force; bodies fall so limply there is no sense that a vivisected character is in any – let alone mortal – danger. About the only visual element that begs attention is the setting, and only because it is confusing. It regularly pulls the reader out of the story to ask questions. While the presence of computers and cellphones suggests a timeframe more contemporary, what little we see of the architecture simultaneously suggests 1920s New York, 1920s Japan, rural China and a modern metropolis all at once.

Only the fact that all of the characters carry the names of famous Japanese authors active in the first half of the 20th century suggests a time frame more fixed, but even this conceit is vague. Beyond the names they share and the fact that each member of the cast uses a supernatural ability titled after one of their namesake’s most famous works, these characters bear no resemblance to their ostensible models. There’s a character named after famous author and suicide Osamu Dazai who jokes about ending his life constantly, yes, and another named after Ryonosuke Akutagawa who fights with a man-eating shadow he calls “Rashomon,” but these Easter eggs are so reductive that they barely even qualify as references. It is not that there is something fundamentally wrong with this kind of literary playfulness. Beauty may be eternal and commanding, but it isn’t sacred: it’s long been artistic tradition to borrow from, reinterpret and even retell classical works or explore the lives of classical artist. Shaffer and later Forman struck so resonate a chord with Amadeus that it barely matters if they stretched the facts of Mozart and Salieri’s life to the breaking point. Alan Moore’s The League of Extraordinary Gentlemen takes a million liberties with the basic details of many of Victorian literature’s most famous novels, but it also understands them so well that these disparate texts and their representatives are enriched and expanded – not shrunk – by the interchange. 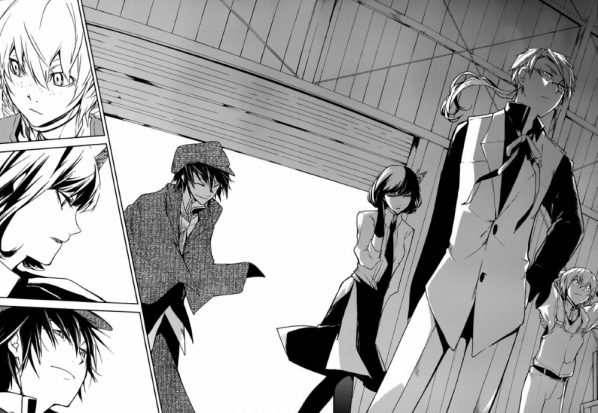 But Bungo Stray Dogs squanders this opportunity: instead of using this chance to explore these authors’ philosophies, instead of delving into how their worldviews may conflict or complement and of the peculiar narrative obsessions they harbored, it saddles the reader with a trite conflict between a detective agency and a mafia. Worse still, this conflict plays out through rote battles between blandly superpowered individuals.

If Bungo Stray Dogs had the decency to tap into the more absurd dimensions at play, it could at least be fun. It could have let loose a bombastic tournament fighter in the vein of Jojo’s Bizarre Adventures to spice up the battles. It could have taken advantage of the evocative naming of many of the present authors’ work and used their idiosyncratic personalities for some narrative intepretations and hijinks. It might at least justify some of what it borrows.

It never does, though. Because Asagiri has no honest reason for bolting these references on to his characters and story; were they removed, absolutely nothing would change. He seems to know he has a stinker of a story here and so has tried to siphon off a bit of the mystique and importance that surrounds these literary greats to justify this work by association, but it’s a miscalculation. The associations do not bolster his work but instead call into question the work itself. All Bungo Stray Dogs can offer back is a yap, barely even heard.