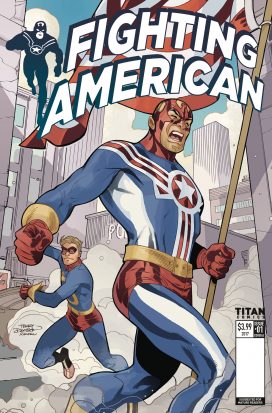 response to the commie smashing Captain America series Timely was publishing without them. Fighting American’s six issue run heavily flirted with self-parody while skewering McCarthyism in the 1950s. Simon and Kirby’s Fighting American is a superhero comic that satirically reflects on the Golden Age while paving the way for the more grounded yet intensely optimistic Silver Age. It’s not as influential as previous collaborations like  Captain America and Young Romance but it’s an interesting piece of comics history. Other publishers have tried resurrecting the legends’ other star-spangled hero, but none of those interpretations ever really stuck. Now it’s time for British publisher, Titan, to take a stab at it.

Fighting American # 1, like the Simon/Kirby original, is a weird comic – but it isn’t anything like a the Simon/Kirby comic. On one hand, Fighting American, his sidekick Speedboy, his friend Professor Twister and commie supervillain Poison Ivan are all written as Golden Age characters while the world around them is written and presented as a realistic representation of 2017 New York City. Rennie’s dialog matches that classic Simon/Kirby tone while Mighten’s art is full of over-the-top superheroics. When Fighting American and Speedboy find themselves in 2017 Times Square, one of the first things they see is a massive lingerie advertisement. Speedboy reacts like a typical teenager, ogling the glare of electric sex, whereas Fighting American makes a comment about modesty that only a repressed 1950s patriarch would find relevant. The scene is played for a laugh but given the way this issue ends, I can’t quite tell if Simon and Kirby are in on the joke.

The heroes chase Poison Ivan and his cronies through the city while Professor Twister and his nephew decide to go back to the 1950s. The Professor’s plan is to leave some weapons and gear in a safe deposit box for Fighting American and then bring him home a few days after – and that’s where the book’s hook comes in. I won’t say how, but I will say that Fighting American, Speedboy and Poison Ivan are trapped in 2017 permanently. Their only way back home has been viciously severed and history has been set.

Duke Mighten’s work captures Kirby’s energy and blends it into a more realistic looking world. It’s tough, blending four color comic characters into drab reality. Setting the first issue in the technicolor madhouse that is Times Square is an inspired choice. The art and colors in this comic impress the heck out of me! It’s an exciting adventure story that shifts tone once the hook drops.

I’m not entirely sure who this book is for. It’s a different take on the man out of time motif that worked for Captain America, but this take feels cynical. The ending sure does grind the 1950s goofiness to a full stop. Fighting American and Speedboy are trapped in 2017 and there’s no way back. It’s a good comic though and I’m looking forward to seeing where it goes. 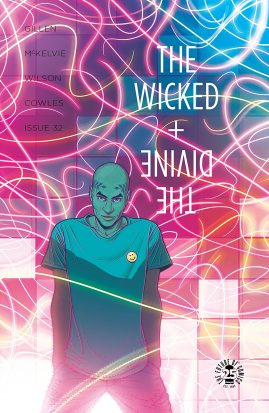 is issue immediately after finishing it because I couldn’t believe how short it felt. The dialogue’s concise and the action is practically nonstop, but we’re nonetheless presented with deep character beats and poignant moments of stillness. All in a month’s work for this team of creators.

A brief three panels set in Persephone’s lair serve as a sort of cold open to the proceedings, with Sakhmet SUPER casually mentioning she’s just murdered Amaterasu on her way in. Persephone merely raises her cigarette in order to exhale, muttering a simple “uh-huh.” You want to play it cool? Persy plays it cooler.

Another brief scene shows the two of them lying across from each other in bed, talking through Persy’s betrayal of her lover, even as it’s still occurring. Gillen uses his words sparingly in this scene, but we glean more of Persephone’s and Sakhmet’s internal lives and what makes them tick than ever before. McKelvie keeps the focus tight on the two women’s faces, and one panel has Sakhmet giving a smile that really does make her look like the cat who got the canary. The tender frown on Persephone’s face in the next panel turns the two into a twisted mirror, their two faces together making flesh and blood comedy/tragedy masks.

Back at the mega-rave, Woden’s confirming himself as a shithead and Dio’s lying broken and bleeding on the floor. Our boy rallies as only a party person can, though, and breaks out some glowing (glowstick?) nunchucks. We’re treated to page formatting that’s a throwback to the Dionysus solo issue, with single panels being broken apart by large counts of four, making the action thump like dancehall beats.

Dio fights like hell, but even he can’t overcome a crowd in thrall to a Woden powered by Ananke’s machine. Every fourth beat or so, his powers completely wane, and we see this god of pleasure as just another human in pain. Even The Norns’ attempt to play cavalry doesn’t quite work. Woden eventually just spits out a “fuck it” and disappears in a cloud of pixels, leaving Cass to worry about getting Dio to a hospital.

Meanwhile, Sakhmet and Persephone have moved on from their earlier heart-to-heart, and they – along with Baal – are now trying to kill each other. Minerva’s watching from a relatively safe distance, and The Morrigan is refusing to come to anyone’s aid. Sakhmet does some real damage to Baal before getting into it with Persephone. Matt Wilson cleverly color-codes the panels to clue us in to which god has the upper hand during the battle, and drains the panels of all vibrant tones if and when their human frailties interrupt the action.

I don’t want to give too much away, but split-second choices are made during the fight, of both mercy and survival. In each case, the fallout is written irrevocably across the decision maker’s face. This may be a story about gods, but all I can see are people.

I was lost, but now I’m found… . That’s a bit melodramatic, right? And not exactly true. Regardless, I have been in a wheel-spinning rut when 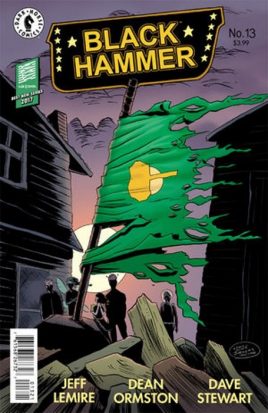 it comes to comics for the better part of 2017. I found a few miniseries’ that I enjoyed (Mayday,Bankshot) but nothing ongoing has grabbed me since forever and I am on a much-needed break from all things Batman-related (come back, Humans!).

So what do I do, give up? That would be easiest, and it would save me money. I do miss having a monthly pull list. I am a practical adult, but I don’t want to throw in the towel yet. So why should I continue? Ah yes, Black Hammer is still out there.

“But Sal,” you say, “didn’t the latest issue of Black Hammer come out almost a month ago? Are you just now getting around to reading it?” Yes to both of those questions. A whole lot of real life has reared it’s ugly head lately, sapping my motivation to search out new comics and taking away what play money I want to spend at my local comic store. I happened to find some motivation last week, and went with it while I could.

But my inner practical adult tried to sabotage said motivation. I haven’t read an issue of Black Hammer since #5, when the first arc ended. I told myself there’s no way to get back in now without dropping some money that’s better spent elsewhere. So I delayed my trip to my local shop for another day. A little bit of research showed me that issue #12 started a new arc, so I only need to buy issue #13 and one back issue, and I can pick up the second trade when it comes out in December. That sort of practicality sells itself!

I am happy that I followed through on my fleeting motivation. Jeff Lemire is one of my two current favorite writers in comics, so quality of story was never a question. Lemire’s brain seems to fire on eight cylinders, giving me full faith that he could handle yet another ongoing monthly book.

It turns out that after issue #13, Black Hammer is taking a several month hiatus. Zounds! Just when I needed it most in my life. However, a new book will take it’s place (Sherlock Frankenstein and the Legion of Evil), a miniseries that will dive into the history of some of the villains of Spiral City. My spider senses tingled a bit at the marketing ploy, but I really should just let myself have some fun here.

So what’s happened in Rockwood since I last visited? It looks like our Golden Age gang of heroes are still brooding in forced retirement. Abraham Slam’s relationship with Tammy Trueheart is going sour, on account of her estranged husband going missing. And Black Hammer’s daughter Lucy has found her way to the farmhouse. Also, some flashbacks to that fateful battle against Anti-God? A slow burn indeed.

Dean Ormston’s art is aces. His understated panels emphasize the emotional pain our heroes feel while living in a depressed and self-defeated state. He never over stuffs pages and is an exemplar of less-is-more in storytelling. Dave Stewart is on colors, and is a wise pairing for Ormston. He uses his muted palette to enhance the melancholy feel, but the result is never mawkish.

Enough with the rambling! My advice to you, dear readers who may be in a comic book funk, is to go with what motivates you. Embrace fun, even if it flies in the face of deep seated practicality. And when a book as moving and quietly excellent as Black Hammer is there for you every month, be there for it.