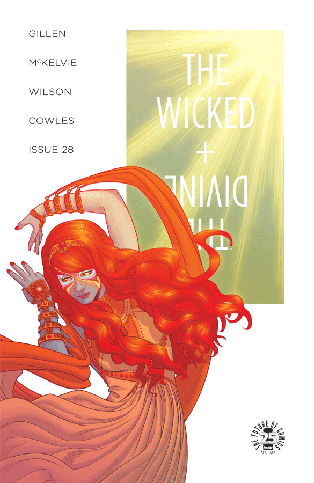 The end of the Imperial Phase (Part I – this is a double album, as Gillen reminds us in his endnote) is finally upon us. Last month’s issue had the Pantheon scattered, each god doing his or her own thing, mostly. Issue #28 has many of the gods violently crashing into each other, all swirling around newly-minted cult leader Amaterasu’s major rager like water around a drain. That metaphor may seem forced, but we can tell from the beginning shit’s about to go down.

The issue may be centered on Ammy’s party to end all parties, but it’s framed by Woden, the god who’s become much more nuanced since Ananke’s sudden demise. Due to Cassandra’s impeccable research skills, Woden’s human parentage is revealed in the opening pages, and suddenly Woden’s latent rage and very particular fetishes start making a whole bunch of sense. Woden was raised by a single father – a minor but significant character we’ve met before – after his mother abandoned the family when he was young.

I hated Woden for his undisguised misogyny in earlier issues, and it was that open hatred of women that left me flummoxed when it came parsing his readiness to team up with Ananke when she first put her plan to stop the Great Darkness in motion. Is there anything of less worth to a patriarchist than an elderly woman? I chalked it up to power aligning with power at the time, but now I wonder if it wasn’t rooted more in Woden’s deep-seated need for approval from an older woman, especially one positioned as a kind of caretaker.

Speaking of complicated relationships with caretakers, Sakhmet’s history with her father is brought up early in the issue – by Woden, no less. When I say “history,” I of course mean “that time she literally ate him.” For a regular consumer of pop culture, anything from the past brought up pointedly in the present should set off the “foreshadowing!” alarm bells. Foreshadow it does, at spectacular levels in this case. Like her father before these unfortunate partygoers, woe betide anyone who awakens Sakhmet’s barely tamped-down fury. She’s a goddess of stone until she’s not. Kudos to the WicDiv creative team for their excellent and terrifying use of all black panels this month. Even without a literal appearance by the Great Darkness, this issue is still pitch-black.

We end with an epilogue set in the recent past and featuring a visibly despairing Ananke, writing a note for someone. Unexpectedly candid, amazingly vulnerable, and shockingly tender, the contents of the note reveal an Ananke as human as the rest of the Pantheon, perhaps even more so. She’s cared for these gods for centuries, time and time again, understanding more about the larger picture of their brief lives even as she may struggle to connect with them moment to moment. How can she protect them from the evils of their world while still allowing them to follow their own paths? Can she even do it at all?

Woden appears in the doorway to tell her of Minerva’s arrival, and she suddenly turns sharp, barking commands in his direction as she simultaneously dismisses him. Woden’s left a tiny figure, staring at her retreating back. This time, when the snark and bile rise to inform his next words, I feel pity instead of annoyance. Your sniping is hitting nothing but air, man. She’s already gone.

Parents: they fuck you up. 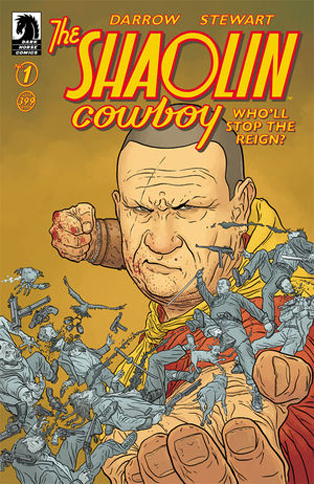 Geoff Darrow’s The Shaolin Cowboy is a hyper violent, meticulously crafted ballet of fists and gore. When last we left the Cowboy, he’d punched, kicked and chainsawed his way through thousands of zombies. The Shaolin Cowboy: Who’ll Stop the Reign # 1 picks up immediately after SC’s punch-a-thon and he is exhausted – nearly to the point of death.

The last series was mostly silent, which thrilled some fans and angered the bejeezus out of others. Personally, there is so much detail in Darrow’s art that I prefer to let his art tell the story. There is a lot more dialogue in this issue. It starts with some vultures Heckle and Jeckle-ing over the zombie corpses and the exacerbated Shaolin Cowboy’s fresh smell. There’s a good gag later in the issue where an angry parent yells, “Now you kids shut the fuck up or I will give you something to complain about!” at one an unseen kid. Given the amount of monologuing returning villain King Crab and his goons do later in the issue, I wouldn’t be surprised if Darrow is having a laugh at his critics’ expense. Thankfully, the dialogue is a lot of fun.

The story then shifts to the story’s principal villain. The Cowboy’s archnemesis, King Crab is back! This time, he seems to be possessing a woman covered in swastika tattoos and has a gang of thugs obsessed with their iPhones. Darrow’s feelings on mobile phone culture pretty clear.

The Shaolin Cowboy: Who’ll Stop the Reign # 1 is a solid first issue. It’s the kind of wide screen comic experience you don’t get that often. Darrow’s art is super detailed as always and it’s a joy to pour over the art and finding all manner of hidden details and sight gags. The book is a hoot and I give it my highest recommendation.