We’re near the home stretch in Dynamite’s current Shaft series. Issue #3 of Shaft: Imitation of Life starts tying the larger story pieces together. In an effort to diversify his work (and ostensibly to make some easy money) John Shaft, Private Detective is now also John Shaft, Film Consultant. But the film world is proving to be even more dangerous than the real world.

The Black Dick, the film our man Shaft is working on, proves not only to be bad for his health, but straight up clowny. In much the same way as the film is ridiculous, writer David F. Walker and artist Dietrich Smith make issue #3 over the top in every way possible: the film’s dialogue and action, 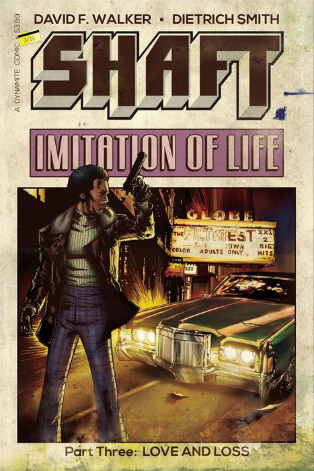 the caricatures of the mobsters and filmmakers, the fake-ass jive of the screenwriter, and the exaggerated theatricality of the lead actor-slash-Shaft rip off Rick Rockman (“Indeed, the Bard himself would be tickled by such verve.”) Shaft can’t get anyone to take anything seriously. Even Honee, foxy production assistant of The Black Dick, has to resort to trickery to bed Shaft.

Smith flexes some artistic chops in this issue. His depictions of Shaft’s responses to the farce unfolding before him are priceless. You can just hear Shaft grumbling at his bad luck. There are some great scenes on pages three and four, overhead shots in Shaft’s office that are a nice touch and have a filmic quality about them, even if the characters are talking about snuff films.

The forthcoming issue #4 will wrap up this chapter of Shaft, and I’ll be sad to see comic book Shaft go away. I still feel that four issues are not enough to really give the story the space it needs, and I feel that issue #4 will wind up being too busy and have too much going on for it’s own good. But Walker hasn’t disappointed yet, so I’m optimistic (which is hard for a natural pessimist such as myself.) I can take solace in knowing that things will likely end terribly for most of the terrible people we met in Imitation of Life. Here’s to Shaft knocking some heads together!

I was an unapologetic skeptic when Star Wars: Darth Vader was first announced. I’m always skeptical of interquels, and am always skeptical of anything that dares meddle with Darth Vader. That being said, Kieron Gillen’s stark, minimal approach won me over almost instantly. Gillen’s Darth Vader (the character) is the stuff of legends and nightmares. Pardon the pun, but he is a force. His language is sparse, and the reader is rarely allowed access to his interior. Instead, Salvador Larroca’s art demands the reader pay attention to Vader’s foreboding form. Just like Darth Vader dominates every scene in film, so too does he do so in the comics.

This idea of “dominance” is in full effect in Darth Vader #19. The last several issues of Vader have been devoted to something called “Book III: The Shu-Torun War”, which might be a fairly easy jumping on point of readers. After the destruction of the Death Star, the 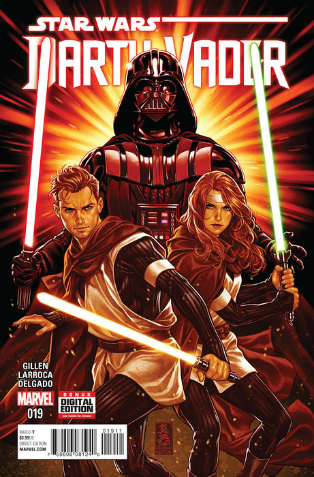 Empire has found itself in dire need of metals and the planet Shu-Torun is a treasure trove of them. Fortunately, Shu-Torun is already a part of the Galactic Empire. Unfortunately, their landed gentry is about to openly rebel. As you might imagine, Emperor Palpatine is having none of this and sends Vader to quell the uprising.

“The Shu-Torun War” has been a wonderful respite from Marvel’s first Star Wars crossover event, Vader Down. While Vader Down felt like a great opportunity to get the whole Star Wars community in one place, it lacked the restraint that Gillen uses so powerfully in Darth Vader. Instead, the Sho-Torun War is a brief, bloody conflict where Vader showcases his brutality, wit, cynicism and insecurity.

There are three crucial fronts that need to be considered to make Darth Vader work: he needs to be manipulative, he needs to swing a lightsaber, he needs to be a cold bastard. And Gillen delivers on them like an Empire tactician. Vader at his most Vader-y. He is cold, dismissive and brutal. He maneuvers his foes into untenable positions and crushes them. He delivers cryptic responses to simple questions in a way designed to gaslight his questioners. It’s Vader at his most Vader-y.

“The Shu-Torun War” as a whole has been a wonderful chance for Larroca to show us Vader by contrast. Shu-Torun is new territory with an aesthetic all its own; it’s courtly nature appears everywhere from the ships to the armor, and Vader himself. Darth Vader always stands out, but he especially does on Shu-Torun, and Larocca goes out of his way to embrace that contrast. The blues and yellows worn by the locals wordlessly world build. These are a people with a context and not just faces in a crowd.

As plot goes, Darth Vader #19 isn’t a mind blowing issue. This is the arc’s concluding chapter, and it’s satisfying to see how the Queen of Shu-Torun has grown as a Vader-ite and to watch Vader operate with single minded determination.

When you think about it, a droid’s life in the world of Star Wars is a hellish one. In the one-shot C-3PO #1 we see the nightmarish adventure that led to C-3PO getting has a red arm in The Force Awakens. While the end is underwhelming, how we get there is; all told through a Star Wars adventure that owes as much to 80’s British comics like ABC Warriors and 2000 AD as it does to its own legendary source material.

The British connection isn’t too odd, as legendary British comic vet James Robinson wrote the issue. Along with Tony Harris, who was his artistic collaborator on the legendary Starman series, they bring us an issue that is as much a harrowing sci-fi adventure as it a philosophical examination of 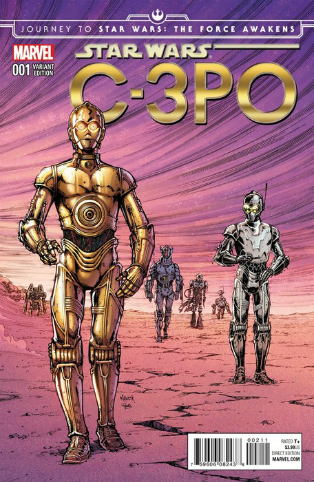 what it is to be human. The emotion and adventure that made Starman a special series is evident in this issue. And yes, we find out how C-3PO gets his red arm.

We are thrust into the action on page one, as a Rebel Alliance space craft has crashed on a hostile alien world. The human crew are all dead, and the droids onboard venture out to get to a homing beacon where they can alert the Rebels to their location and be rescued. One of the droids is a First Order droid named Omri that knows classified info about the location of the imprisoned Admiral Ackbar. It’s up to C-3PO, a medical droid, a security droid and a builder droid to get this prisoner droid off the planet.

As the droids make their way to this homing beacon they are destroyed by the wildlife and hostile conditions of the planet. As this adventure goes on C-3PO and the First Order droid have a discussion on why they all must be put through this ordeal. Themes of survival, friendship, loyalty, existence and sacrifice are conveyed by characters that are doing this for a greater good that most likely won’t benefit them. These are manufactured and somewhat sentient beings that will be rewarded with a memory wipe if they survive one adventure and go on to the next. In a scene that almost evokes Roy Batty in Blade Runner C-3PO reveals that fragments of his past adventures pre-memory wipes do exist. Like a loyal butler, military man or company man he does his duty regardless of the danger it puts him in, or for what reason he really does it. Not bad for a character that is often the butt of jokes in the Star Wars movies.

Tony Harris brings a rich mood and atmosphere to the dark and hostile world that this tale takes place in. The backgrounds evoke Heavy Metal comic books as much as the often one-environment planetary designs in Star Wars movies. Some of the robot designs remind me of a combination of Star Wars and the ABC Warriorscomics series, which I’ve lately been reading old collections of. In that British series a group of robot soldiers are serving their often cruel human masters to take down the enemy forces of the Volgans and other threats, a similarity not lost on me while reading this issue. Outside of Omri and C-3PO each droid is given enough characterization so that we become invested in their fates.

There is little levity in this comic, most likely an intentional move since the droids of Star Wars are often used for comic relief. Occasionally we’ve seen in Expanded Universe materials and even in the old Droids cartoon that these are often tragic characters, and many have destinies controlled by uncaring masters. It’s not surprising that some would feel the urge to rebel, but if it’s true that C-3PO does remember a portion of his past it’s not surprising why he’s been around for this long, since him and R2-D2 are the only characters that appear in all seven Star Wars movies. In many ways they are a metaphor for the place of droids in general in a galaxy far, far away: often ignored or dumped upon but infinitely important to the epic narrative.

A fine example of this is the scene in Force Awakens where C-3PO mentions to Han Solo that he may not recognize him due to his new arm. Characteristic of Han he brushes past him quickly and ignores him. As the Ewoks know C-3PO has many stories to tell, but he’s content to do his duty and keep them all inside his shiny head. If this tale is just the tip of the iceberg of what he’s been up to since Return of the Jedi then I hope Marvel taps Robinson and Harris for another C-3PO or droids tale. Until then I highly recommend checking out C-3PO #1.

Which Living Character Can Win The Game Of Thrones?