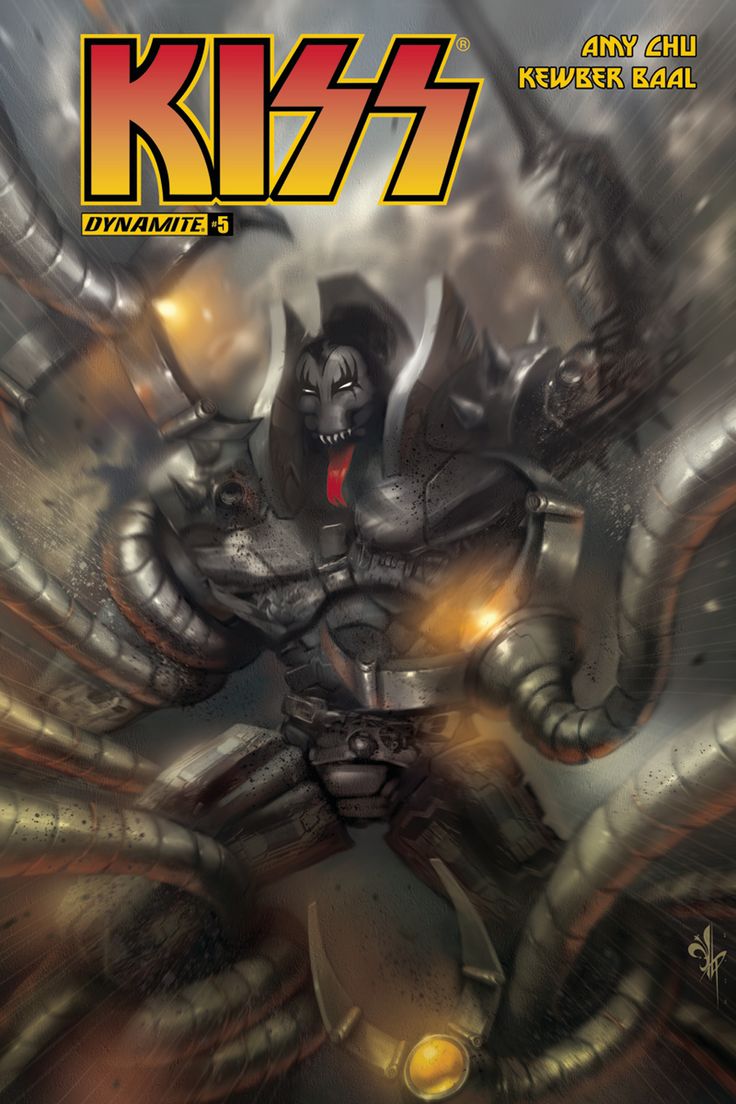 The plot glacially moves along in Kiss #5, as it would seem that the citizens of Blackwell are all getting very hot. More odd and nonsensical elements are explored in this issue, like the fact that everyone in this city dress like members of Kiss. The kids are still stuck in the man cave, listening to Kiss songs like “Shout It Out Loud.” They discover that yes, they ARE related to this Blackwell guy and can control the Kiss robots. A member of the security force also finds them, after having a meeting with the literal Elders that the album title Music From The Elder refers to.

We also see a glimpse of who the Elders and apparent rulers of Blackwell are, which are four wrinkled old Emperor Palpatines in hoods and black cloaks. Does this mean my original theory that Kiss is running this dystopian city may actually coming to pass? It seems likely now. It’s also a random callback to the cloaks that Kiss wears around the swimming pool in Kiss Meets the Phantom of the Park, an equally terrible Kiss property that’s way more entertaining because you can tell only Gene Simmons and Paul Stanley are taking it seriously, while everybody else knows that it’s a dumb made for TV movie. Check it out on Youtube sometime, and click around to the wacky scenes with Kiss in them because the rest of the movie is pretty dull!

The art in this issue was confusing at times. In one scene in the man cave the kids are playing “Shout It Out Loud”, or are they? The way it’s drawn it looks like they could also just be bopping around with the instruments while the track played, since the track is already going before they put on their Kiss gear and strap on the instruments. If it’s the latter then what hope do we have for these protagonists? Is someone playing “Destroyer” on the PA somewhere, and if so shouldn’t this group of kids be looking into that?

While there’s at least a cliffhanger that’s reminiscent of the Twilight Zone episode “The Midnight Sun” at the end of this issue, there’s still a lot of things that don’t make sense. I’m wondering if some more breadcrumbs will be dropped in the next issue, as that’s been the style of this decompressed series. This is either a lot of build up to something really big, or we’ll end the series with the real life Paul Stanley waking up confused and distressed in his star-shaped bed full of groupies. Like “The Midnight Sun”, he’ll realize it was all a dream, and that it isn’t the sun coming closer to Earth that’s melting the icecaps and causing erratic weather patterns, but actually it’s us causing this global warming. He’ll then proceed to shake his head, pull up his blanket made out of $100 bills to his chin, roll over on his side, and go back to sleep.

Gene Simmons, who has cameras installed in Paul’s room and is monitoring all this from a remote location, will be grateful that he doesn’t have to retire Paul from the band and send him to the same farm he sent Peter Criss, Ace Frehley, Vinnie Vincent and Mark St. John. 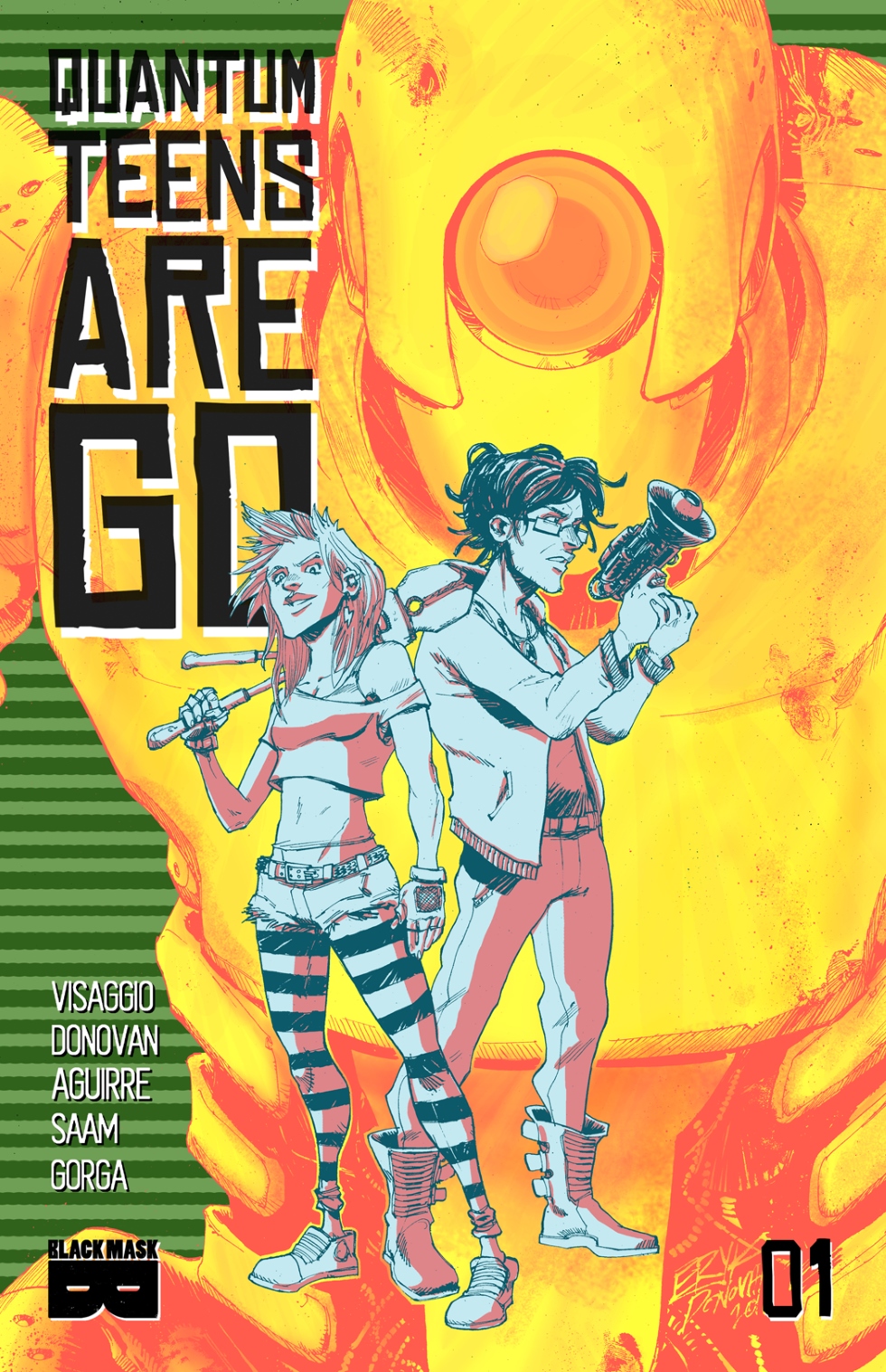 I really dig the title of this book. Quantum Teens Are Go sounds like it could be a Rezillos album. But stories about teens make me squeamish. They’re all angsty and self-absorbed (I know, I used to be one) so I braced myself for a hand-wringing onslaught. Instead, Quantum Teens was a fun ride throughout, heavy on adventure and light on teen melodrama.

The story is outrageous and absurd, in the best possible ways. The premise seems simple, but the twists are fresh and unique. Two science and tech-savvy lovers get their kicks breaking into shuttered labs to steal parts for a time machine they’re building. However, they’re high school kids. And they’re not white and nerdy. And one is transgender. Quantum Teens takes what could be a typical comics story several steps off the beaten path, but readers are in capable hands here with the creative team (mostly unknown to me, but I plan on changing that): writer Magdalene Visaggio, artist Eryk Donovan and colorist Claudia Aguirre.

Visaggio’s world seems like our own but there’s a futuristic feeling about it. Science seems advanced to the point that various gangs of “exxies” are competing with each other in a whole new race to the stars. Visaggio writes strong characters; she knows how to voice those who may be young in age but are old in soul. We don’t see much back story of lead characters Natalie and Sumesh in issue #1 but there’s a sense that our protagonists have been through a lot. Sumesh has tensions with his adopted family. Natalie, transitioning from Brandon, faces misunderstanding parents and some serious hate from her classmates. Visaggio uses said misunderstanding and hate to shape Natalie’s story. We see how bad-ass Natalie is and how she won’t bow to anyone. And she’s confident enough to talk shop with the big kids in their “exxie” world.

Visaggio includes a few touches of humor without going over the top. A bully is humiliated by an exploding slime ball (oh, to have had one of those in high school!) There’s some purposefully heavy-handed exposition on page 12 where Natalie and Sumesh are all but talking directly to the reader (needed to catch the reader up and also move things along as Quantum Teens is slated to be a four issue mini-series) but it’s delivered with a seeming nod and wink.

This isn’t Visaggio’s first major book to feature a trans lead character (see Kim & Kim, which I definitely will check out now). Black Mask Studios is the proud home to new emerging talent and is giving a platform to creators the comics world needs to hear from: women, people of color, LGBTQ-positive. With their roster and critical notice, Black Mask Studios can help move stories from non-mainstream creators into an arena where we the comic book-loving audience will have to hear them.

Co-creator/artist Donovan’s drawings are detailed and realistic (whether it be a science lab, someone’s bedroom or a high school cafeteria) but he leaves enough space within panels that they aren’t over-crowded. His facial expressions are fluid, capturing the ever-fluctuating moods of a teenager. Donovan goes easily from wild-eyed excitement to sneering disdain. Aguirre’s color palette is generally muted but she excels in lighting dark or nighttime scenes.

My only real complaint about Quantum Teens isn’t with the book itself. As of Unwinnable’s deadline, the Black Mask Studios website has no mention of the book, and really no news updates since late December 2016. I’m thankful for the advanced copy of Quantum Teens #1 that Unwinnable received, but I hope to see it, and the entire series, on the shelves of my local comics shop.

Anyway, what really sealed the deal on Quantum Teens for me was a recent interview with Visaggio, where she said she wants “to recreate the magic of The Adventures of Pete and Pete,” a television show about the grand dreams of youth that is near and dear to my heart. Visaggio is setting a high bar for herself, but if issue #1 is an indicator for the rest of the series, then we’re heading the right way.

The Ground on Which our Stories are Contested