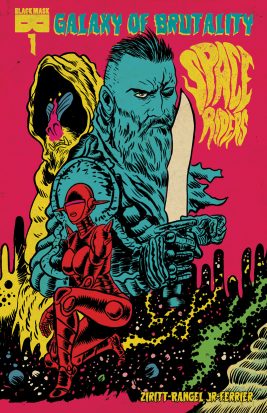 Galaxy of Brutality picks up not terribly long after we last saw the Skullship Santa Muerte. Captain Peligro is still the baddest Space Rider in the universe. He and his robot co-pilot Yara battle evil Vikers (think brutal space bikers) while his walking, talking mandrill first officer, Mono, has left the crew in search of a cosmic vision (and after he has an epic throwdown with Peligro). The massive amount of ideas in this comic is almost dizzying. Between rescuing refugees and visiting the Temple of the Fallen God, Ziritt’s art and colors are as bombastic as the story he and Rangel tell.

Space Riders: Galaxy of Brutality is an action packed and hysterical mix of high concept science fiction and low brow humor. Ziritt and Rangel shred every tough guy and sci fi trope they can find all while making the whole Space Riders weird! How many other comics have talking mandrills go on outer space vision quests? That’s what I’m saying! Why are you still reading this? Go! Read this comic! 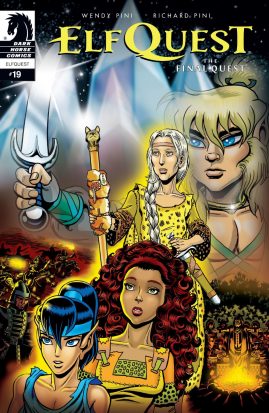 As EQ: The Final Quest winds down, I remain impressed by how adeptly the Pinis find dynamic character beats within all the many groups of elves scattered across the World of Two Moons. Each new issue steadily moves the story towards its soon-to-be end, even if it seems to be only by inches, but there are plenty of moments for small kindnesses between friends, deep introspection from older characters, and even some revelations in small-scale personal dramas.

Which is all to say I don’t mind the eking pace of the main plot, which has various travelers continuing towards Father Tree Holt and/or aiming to meet at the Palace of the High Ones, even as others choose to stay with their homes and families. There’s no need to rush to the end of a journey when it’s one weighted with such finality, as long as the characters make progress within and among themselves.

Still, there is action to be found in these pages, with the Djunslander war-men continuing apace towards Father Tree Holt, bent on its destruction, and the cruel glider Door searching the ruins of the Sun Village for pieces of the miniature Palace in order to reach the larger one before it has a chance to finally leave the world. Two threats, one without and one within, encroach on the elves as they prepare for their final journey among the stars.

As ever, the artwork is sublime, with Sonny Strait’s colors providing rich contrasts between locations, time of day, and even headspaces, to very cool effect. Wendy Pini is still a queen of facial expressions – elves and humans alike often say more with their eyes than their words, which is no small feat in a still medium like comics.

Each new issue of ElfQuest: The Final Quest is one to be savored, something Wendy and Richard Pini seem to be embracing as we come down to the final five issues of the run. As long as the character development stays as fertile and complex as it has, that’s just fine with me. 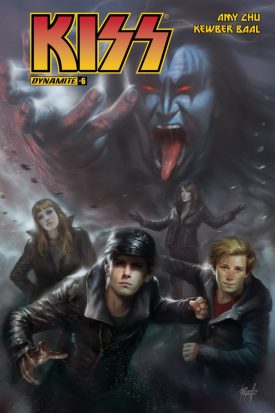 In this issue we go into outer space, where we have been all along. So far the four young heroes of this series have discovered that two of them may be genetically linked to the founder of the last city left in the world called Blackwell, that they may be linked to Kiss, and also that the sun is about to crash into Blackwell, which we find out in this issue is in outer space. They’ve also discovered Kiss robots and a room full of Kiss merchandise and probably signature instruments, which smells like mold and used sweatsocks in my imagination. This room is part of the space craft that’s now hurtling into the sun. The kids, who are wearing facepaint and Kiss stage costumes, must save the Earth from solar collision. But first, they will clown around on the aforementioned Kiss signature instruments.

Kiss songs referenced in this issue include “Rocket Ride”, which is mostly likely not about riding on or in a rocket since this is the misogynistic and gross dudes of Kiss we’re talking about, and they’re talking about a woman riding on their “rocket”. “Hotter Than Hell”, which makes a little more sense even if it is also just about sex ultimately and “Odyssey”, which may actually be about traveling into outer space. Oh yeah, and “God Gave Rock N’ Roll To You II”, because whatever.

The kids manage to fire off a chunk of the spacecraft into the sun and re-direct it, no sweat Earth is saved. As the issue ends they are heading back to Blackwell. Will they be heroes, or will they be brought up on charges for jettisoning a member of the security force out into space and most likely killing him? While this isn’t Watchmen, I have to say that Amy Chu and Kewber Baal are at least delivering an entertaining tie-in comic. Sure, I could care less about the plot or what happens to any of the characters, but just the way that Chu is tying all of the random idiocy and bone-headedness of Kiss together into a wacky little sci-fi b-movie is great.

I’ve been watching a lot of Mystery Science Theater 3000 episodes recently in preparation for the return of the series in April. If this comic book story was an actual Kiss movie from the 70’s or 80’s I guarantee Joel, Mike, Tom Servo and Crow would be watching it, especially if it was more of a Kiss Meets the Phantom of the Park level of production at a lower budget. The fact that four scuzzy rock dudes are sometimes literally watching over four young teens from the sky is a hilarious concept, and there’s only so much mythology to Kiss before you’re grabbing for straws with the plot. Especially since, as far as we know, Kiss has yet to physically show up in the comic (they’re probably the Elders, four “Emperor Palpatines” that popped up in a previous issue).

What kind of story can we expect going forward with this comic? Are the kids going to Mystery Team their way through preventing post-apocalyptic events, maybe solving some post-apocalyptic mysteries along the way? That seems most likely.