Abandoned junkyards, towns ruled by autocratic mayors and desolate stretches of dry plains are just some of the places the inhabitants of the original Fallout call home.

Fortunately, you live in a clean, sterile underground vault, sheltered from all the unpleasantness of the wastelands. Life was cushy until the day you were chosen by the overseer to fix the vault’s damaged water recycler. You were the one to take a trip to the surface to hunt for replacement parts.

I’m suddenly reminded of my Fallout experience—the isometric game by Interplay, not the first-person shooters by Bethesda—when I read about the recent release of Fallout 1.5: Resurrection; a Fallout 2 mod set between the timelines of the first two games.

As fans of the original Fallout, the developers wanted to highlight the depravity and hopelessness that characterized the game, while extracting all the silliness of Fallout 2. “Easter eggs and jokes, with which Fallout 2 was literally overfilled, have been folded into the background,” say the developers.

But by no means was Fallout a polished game; it was swarming with bugs, and not just the irradiated kind.

Companions who wouldn’t move out of the way was a major pet peeve, and I was occasionally unable to get out of rooms because their inexplicable need to stand at the doorways. This was made worse when reloading an old saved game wasn’t an option. Sometimes I’d find myself resorting to killing them just so that they would get out of my way.

On the other hand, what Fallout also had in spades was ingenuity. Much like a ticking time bomb, the longer you take to look for the water recycler’s replacement parts, the closer your fellow vault residents came to dying of thirst.

Traveling from one location to another can take several days—time you probably can’t afford to lose—so planning your route and side quests becomes a strategic decision. If your wanderlust compels you to explore every inch of the outside world, there are ways to buy more time, but such choices may have dire consequences. 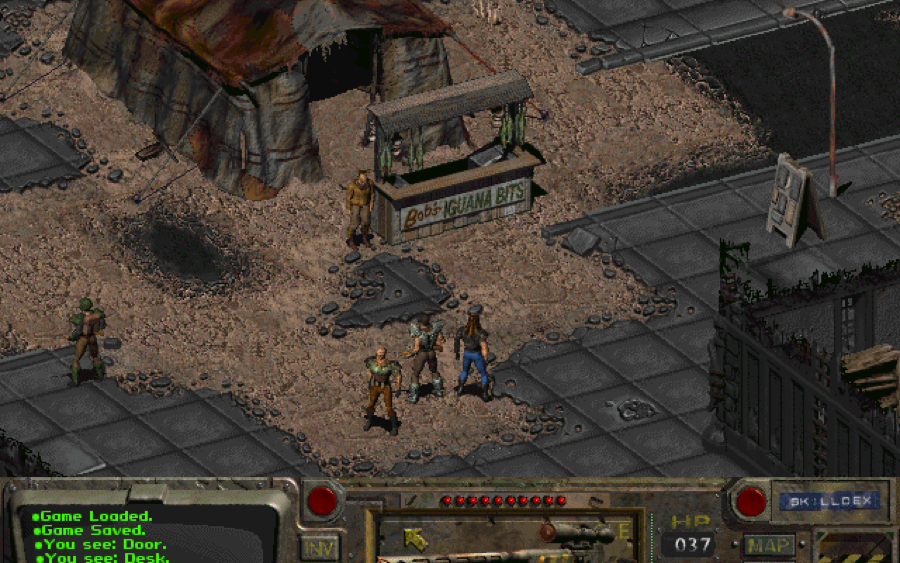 Fallout also doesn’t shy away from reminding us about the harsh and merciless reality of post-apocalyptic life. Such second chances a rare occurrence, and will cost you personally.

The game’s turn-based combat system makes surviving battles much more of a challenge than modern Fallout games, so every companion counts when it comes to surviving grueling fights. However, if they get knocked out during these battles, they don’t curl up on the ground and rub their knees in mock agony—they die.

But given their propensity to get way too trigger happy about shooting each other (and myself), even their deaths were difficult to avoid. Seriously, how hard is it to step aside when shooting things, guys? For a bunch of hardened wasteland veterans, this should have been hard-wired into your noggins.

The original Fallout is not an easy title to play through. With a 150-day time limit to the main quest, killable companions and tactical combat, the newer Fallout titles circa Fallout 3 is a far cry from the bleak and depressing tone of the original.

It’s no wonder classic Fallout diehards had thoroughly rejected Bethesda’s take on the franchise. Seeing that another isometric Fallout title is unlikely to happen, the Fallout 1.5 mod may just make these fans break into a rare smile.

Cardboard Fallout is Worth its Weight in Caps

Legends of Tomorrow Wants to Be Doctor Who, and Is All the Better for It