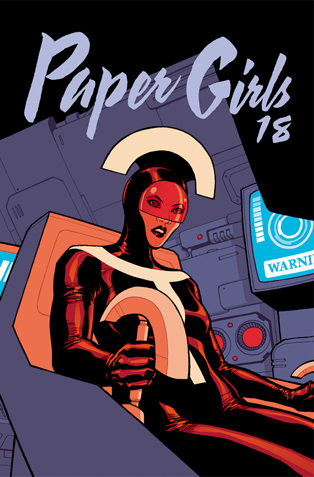 I’ve come to realize the best way for me to enjoy Paper Girls is to focus on the small character-driven beats within each issue, and to stop hoping for the big mystery to be revealed. For every question answered a new one is asked, and while that’s a gangbusters way to keep a comic book series going, it’s a storytelling technique that I’ve always found personally frustrating. (It’s my own weakness, PG team, keep on keepin’ on.)

Fortunately in Paper Girls’ case, those character beats are nearly always excellent. KJ’s had some transformative moments in this arc and the last, and she’s a markedly changed young woman as a result. Mac, however, is not so sure, and wonders aloud to Erin if this KJ is really our KJ, or if the gang isn’t dealing with another “don’t trust future Erin” situation.

I’m interested to follow this particular thread. While it wouldn’t be out of sorts for Vaughan to serve us up a doppelgänger or have future technology fundamentally change a character, KJ’s behavior changes read to me as a result of a new centered self-awareness. For one, she’s had a revelation about her sexuality and confided in Mac about it – which has tellingly shaken the resident tough-girl.

She also recently started menstruating, and as hokey and tired as a “get your period, become a woman” narrative can be, I quite like the way the Paper Girls team handles it. Speaking from my own experience, it’s a signal of oncoming adulthood that both isn’t and is a big deal – women have been menstruating since the beginning of our existence but since we’re still taught to be weirdly secretive about it, it can feel like being initiated into a secret grown-ups club when it happens.

So much of Paper Girls is about what happens when the young face off with the old, sometimes represented by a child literally meeting her adult self. It’s easy to forget that’s a gauntlet we’ve all run through on our way to figuring out just who the heck we’re supposed to be, and whether or not we’ve been some version of it forever.

There is a sort of one-way bridge to adulthood that we can only cross once, but it doesn’t mean we can’t look back to see and understand where we were. What I love about Paper Girls is how it combines a wild sci-fi story with the familiar trappings of our own world to frame growing up as the exciting and scary adventure it is. 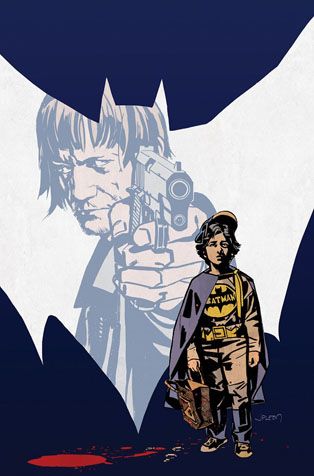 Batman: Creature of the Night #1

You know what? It’s been a year since I bought a Batman comic book. I was elbow deep for the preceding five years (“New 52” brought me out of a years-long hiatus) and I tried to be optimistic about “Rebirth,” but lackluster stories and twice-monthly publishing of Batman and Detective Comics made me pull the plug. I hung onto All-Star Batman for a bit more because of writer Scott Snyder, but even that book had to go.

Batman: Creature of the Night is an interesting premise (a new take on Year One) and it’s a limited series, so I thought I’d give it a chance. I might have parted from Batman on bad terms, but I can’t completely stay away. Issue #1 makes me feel like I made the right decision.

Picture it: Boston, 1968. A world where Batman is… a famous comics character! Young Bruce Wainwright is obsessed with and wants to be Batman. He draws parallels between his life and that of Batman/Bruce Wayne (the similar enough name, living in a big city, a relative named Alfred – well, Alton Frederick, but the boy uses some poetic license.) And then, an unthinkable parallel – Bruce’s parents are murdered during a robbery while he watches. But in a twist, young Bruce is shot also, and languishes in a coma for some time, awakening to find that his parents’ murders are hopeless cold cases.

Bruce is packed off to a boarding school with no sense of closure. Social Services won’t allow Bruce to live with uncle Alfred, due to Alfred’s “lifestyle” (strongly hinting that he is a gay man) so Bruce is a ward of the state. Bruce doesn’t understand why his parents’ killers haven’t been caught and regularly harasses a certain Officer Gordon (last name: Hoover.) As time passes, Bruce begins to have visions of a creature of the night who targets criminals. Said criminals report a bat-like monster attacked them.

This is enough to keep this jaded old Bat-fan interested in the series. Creature of the Night is very much an homage to Batman: Year One. Writer Kurt Busiek’s use of shifting points-of-view keeps readers on their toes, adding a layer of distance and mystery. Artist and colorist John Paul Leon evokes the visuals of Year One, with strong lines, heavy shadows and a muted palette.

I do have several complaints, though. I like the premium packaging but the pages run into the binding with no borders for leeway, causing some of the art be lost. I like Todd Klein’s choice to letter each character’s monologues differently, however the cursive used for Alfred is a bit cramped and slows me down too much. The lettering is part of the total nostalgic package (and the cursive is slightly easier to read than in Year One) so I can’t make it too much a demerit.

Batman: Creature of the Night issue #1 reads well as a stand alone book, but I’m glad there’s more and I’m interested in seeing where the creative team takes things next. How will Bruce Wainwright grow as the series progresses? Will he become Batman? Will the supernatural creature of the night be his guardian? Will issue #2 be anything like Batman: Year Two? Any other calls for the Reaper?

The Board Soul: Feast or Famine