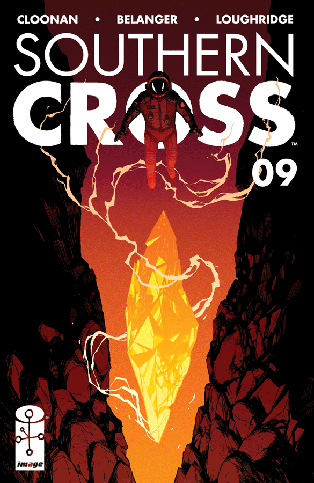 Southern Cross might be one of the more inscrutable comics I pick up. It feels like it comes at me from angles I can’t fully perceive. It’s like trying to perceive the grimiest, drug addicted sliver of glass. Every time I think I’ve got a firm grasp on what it is or where it’s going it eludes me. It actively resists my ability to comprehend it.

Maybe that’s why I absolutely devour it. I try and hold back, buy a few issues at a time, and savor them and dark nights. Instead, I end up blazing through them, an admittedly awful way to read Southern Cross.

For one, it makes it incredibly difficult to get the true beauty of what Andy Belanger does with some of these panels. If I was going to pick any one thing about this issue it’s the attention to eyes. As things aboard the rig go from bad to worse, I’ve begun to pay more and more attention to character’s eyes.

They implicate the reader in the story. The “shot reverse shot” style at work here and the eyeline matches make the eyes a huge part of the storytelling. It’s what makes masked characters unsettling, it’s what pulls you through the panels.

That’s not to say that Becky Cloonan’s story isn’t great either. It’s the heart of the inscrutability and that’s a good thing. Some of my favorite mysteries or detective stories put me in the same mind space as the detective. Trying to sort out where the mysterious crime syndicate ends and the otherworldly eldritch sci-fi begins is a herculean task, perhaps one not worth tackling.

Southern Cross is at its most powerful when you just go with it. The characters must, so, why shouldn’t you?

The first arc was all about undisclosed motives, a murder mystery party with sci-fi ghosts that bordered on Event Horizon. This current arc flips the table and goes full Dead Space with a bit of old school detective fiction and I think the series is stronger for it. Southern Cross has always been raw but instead of diving deep into whatever happened to the eponymous Southern Cross we’re cast across the galaxy trying to pick up the pieces.

Its disorienting but so is having your boss murdered and finding yourself surrounded by a corporate-martial law scenario where the powers that be straight up murder the proletariat and all while you try to find an alien artifact with world bending powers. Yeah, it’s a lot to take in. But don’t just go with it. Enjoy grimy visuals and bask in Lee Loughridge’s colors. They’re trippy, heavy, and wildly changing to reflect groups, moods, and pacing. 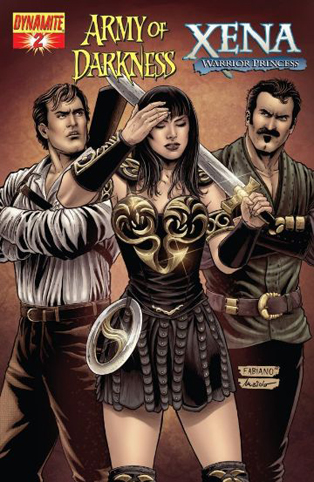 On the surface mashing up the Army Of Darkness and Xena properties seem wonky, but there is a lot of overlap between the two. First off is Sam Raimi, who had creative roles in both the Evil Dead and Army Of Darkness movies as well as Hercules and Xena, as well as the fact that Bruce Campbell and Lucy Lawless have played characters in both worlds. Campbell played Autolycus, the King of Thieves on both Hercules and Xena. Lucy Lawless is currently playing Ruby Knowby the Deadite hunter on Ash vs. Evil Dead. There are also multiple crossovers between these two properties. Ultimately, is this go-around fantasy franchises crossover needed? Given where veteran comics writer Scott Lobdell is taking it, yes.

So far it seems like Lobdell is playing around with storytelling decompression as well as time. Issue two of this series starts the same as the first one, with a dying Gabrielle telling Xena that she needs to summon “The Warrior Who Walks Through Time”, while in the background we can see flames and corpses. One can guess the armies of the undead are behind this chaos, but weirdly we still haven’t seen Ash fighting them yet.

We do see Ash being his typical horny misogynist self, as he flirts with his coworker and is twice sucked into the portal right as he’s about to get some sugar. In issue one his trip back through time was a failure, and it pretty much is this time. But there’s also a moment in this issue where Ash falls out of time during the birth of one of the main characters that changes him. His heroic nature rises to the top and he wants to help Xena and Gabrielle. Ash is becoming less selfish and more heroic, could he possibly be going through a character arc?

The artwork by the team of Elliott Fernandez and Diego Galindo brings a fun kinetic flow to the proceedings. It’s cartoony but also detailed, illustrating the wild ride of Ash clumsily falling through time. There’s some worldbuilding too, as we’re introduced to a caretaker of the timestream in this issue who literally yanks Ash out of time. Ash, Xena and Gabrielle look enough like their real-life counterparts as played in their respective film and TV source material, but not in a photorealistic way that distracts you from the fact that you’re reading a comic book.

I like where they’re going with this, and since it’s the third series involving this crossover it’s refreshing that they’re trying something different with this. Yes, there are fun references for fans of both franchises, Ash does let out a “Give me some sugar baby”, but there’s also not a lot of retreading through the action beats of the Evil Dead and Army Of Darkness movies, or for that matter the Xena: Warrior Princess. I’m hoping that there is some of this fun action at some point, but it would be interested if this remains a cerebral time travel adventure. I also hope they give the Xena characters a little more to do.

As Ash would say, everything about this so far is “Groovy.”