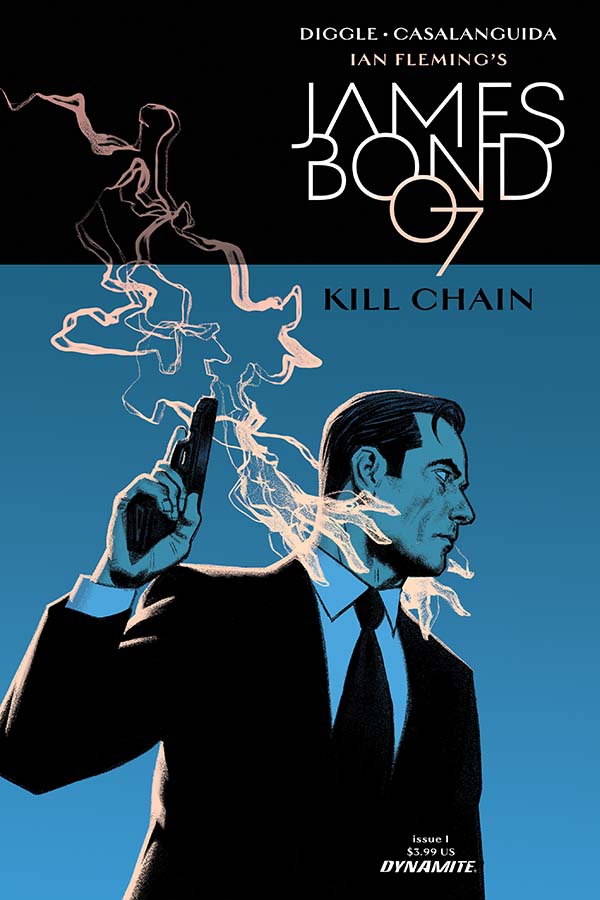 Kill Chain is off to one of the more promising starts of a James Bond comic that I’ve seen since Warren Ellis took his leave. One of the things
things missing about Ellis was the kind of grand danger associated with being James Bond as opposed to being a generic spy in an action story. Some of the recent arcs have felt more at home in the land of Grayson than James Bond.

What makes Kill Chain work is that it pretty fairly sets the stakes and the tone. It doesn’t overly rely on set up, things just start happening.
Two Bad Guys talk, Bond sleeps with a spy off panel, Bond is ensnared in a plot, people die, people aren’t dead, and the Russians. It’s all there just as Fleming would have wanted it.

For awhile I’ve questioned what kind of Bond Diggle is trying to write. Is he going for the filmic Bourne style action here of more recent days? Is he trying for the man of mystery and danger that Fleming wrote to bolster his own insecurities? Or was he trying to take a stab at the swinging era that long proceeded Daniel Craig’s tenure?

We get something of an answer here in Kill Chain. All of them. In one issue Diggle takes a deep run at the Bond who uses seduction as a weapon, grits his teeth and drives through a restaurant in packed with people, and unveils the big bad enemy organization with a flourish straight from the Connery/Moore era.

Whats more is that the page is super pretty to look at. Luca Casalanguida’s art is to die for. Everything is a wash that feels timeless, something that I feel is much better in a Bond story than any other quality. I’ve talked before about the power of Bond’s resilience but this has never been truer than a feel that is both current and past and Casalanguida nails it.

Overall I’m very happy with Kill Chain and even optimistic. We’ll see what happens with a second issue but one thing that I have been missing is the kind of “cold open” set up that works so well for Bond. Now that SMERSH is in the picture, anything can happen. Hopefully this isn’t just a “Bond on the run” story but something that goes to wild and exotic places.

This Bond certainly has more of a Jack Bauer feel than most but hopefully that changes. Hopefully we’ll get to leave rain the dreariness in this version of Rotterdam and really get things rolling back into the traveling world of James Bond. 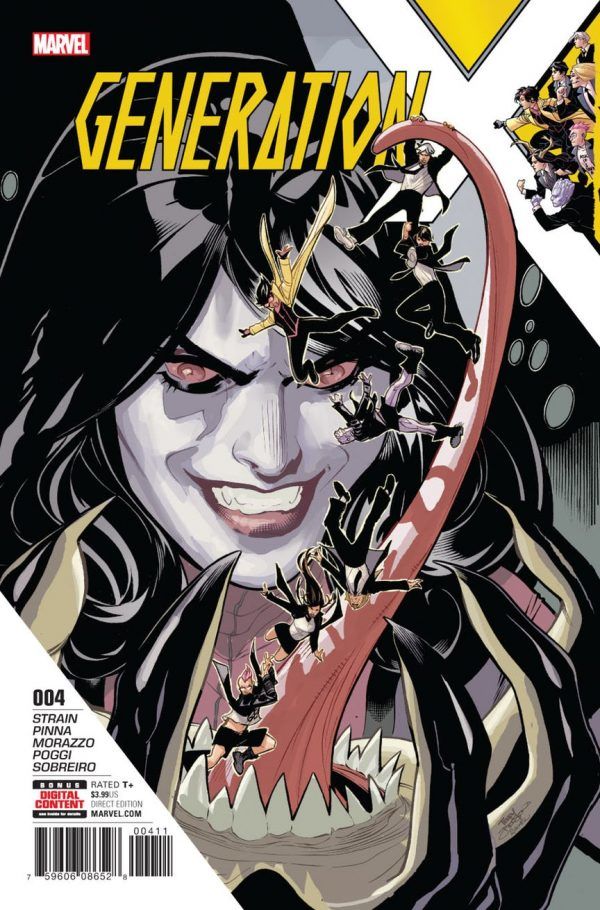 These new X-Men comics are blowing right by! I wanted to get started with this series from the beginning, but $3.99 + many different books= taking a while to getting around to this. I dig it, even if it shines a blaring light on a problem I have with the current X-Books and the treatment of characters created since the 80s. On the other hand, so far this book is almost completely free of the same boring core X-Men characters showing up. I mean, there’s multiple other comics where I can check in with them, I’m not saying I don’t want to see Colossus, Storm, Nightcrawler, Rogue and the rest.

The vibe of this series so far is similar to the great Wolverine and the X-Men series, focusing more on the students and their misadventures. Smaller arcs are preferred, rather than long decompressed storylines. Christina Strain writes believable 3-D characters interacting as such, like the scene where former New Mutants and Generation X peeps Dani Moonstar and Jubilation Lee are making small talk while watching Drag Race on TV and having drinks. Well, Moonstar is having a drink, Jubilee is drinking blood out of a wine glass, because she’s a vampire these days, ugh.

Meanwhile our main team featuring the current next generation of (reject) mutants including Quentin Quire, Bling, and the awesome Nature Girl are investigating an attack on a fellow mutant in Central Park. It leads them to another familiar former Generation X and X-Factor member in the sewers, now operating as the current incarnation of Generation X villain Emplate, who’s also kind of a vampire, ugh.

Nonetheless, despite these blood and energy-sucking developments to great female characters it’s still good. The art by Pinna and Morazzo is playful with some funny visual gags, like Quire’s telepathic defense helmets he creates for his teammates when a Stepford Cuckoo tries to scan them from the mansion.

My only real issue with this comic is the weird creative decisions made for some of my favorite characters created within the last thirty years. Does Jubilee really need vampirism on top of being a mother and now Supervisory X-Man? Does a character who I won’t name as a spoiler who also had a million things going for her need to be the current Emplate? It is what it is, I just wish the somewhat newer characters could be developed more without having them being cannon fodder or some weird creative experiment that lasts for way too long. There’s plenty of stories to tell about the newer crop of mutants, but I have a feeling we’ll see more House of M’s or events killing these characters off.

Rant aside this comic is a lot of fun, and the main characters are mostly new and fresh mutants to develop. I’ve been re-reading the old New Mutants comics and one thing I notice is how much fun Chris Claremont is eventually having on the series, especially once Bill Sienkiewicz comes on board as the artist. The X-Men aren’t currently what they once were in popularity, but it would be nice to see some new characters developed for 30-50 issues, with development instead of stunts. Maybe one day Marvel won’t be ashamed of what they have with some of these characters, and established characters can be developed without weird gimmicks.

A Visitor’s Guide to Sigil