Video games have been used as teaching tools in the classroom for decades now.  Who could forget classics like Oregon Trail, Reader Rabbit, and Where in the World is Carmen Sandiego? But today serious game designers are asking if games can be used to teach another subject: empathy.

Some, like Anna Anthropy (Dys4ia), believe that using games “as a substitute for education” or “a way to claim alllyship” is a “farce”:

Being an ally takes work, it requires you to examine your own behavior, it is an ongoing process with no end point. That people are eager to use games as a shortcut to that, and way to feel like   they’ve done the work and excuse themselves from further educating themselves, angers and disgusts me. You don’t know what it’s like to be me.

Others, like Vander Caballero (Papa & Yo), think that empathy games are vital to the development of video games as an artform. And Ryan Green (That Dragon, Cancer) believes that the medium is particularly suited to developing a sense of understanding between the creator and the player:

When someone talks about a video game, they use the pronoun ‘I’. It gives you a platform to create immersion and engagement – a new level of empathy.

I interviewed Yvvy  (pronounced “Eevee, like the Pokémon”) about Easy Level Life, a game about #BlackLivesMatter, and the potential of video games as an art form to tackle emotionally charged subjects.

Megan Condis: First, tell me a little bit about yourself.  How did you get into game design?

Yvvy: I’m Yvvy! I’m a recent graduate in programming and math and a software engineer. I love anime and video games, and my recent big passion is making games myself!

How did I get into game design? I’ve always loved games, but it wasn’t until I saw visual novels that I thought it might be something I could actually do myself. I started tinkering with those, then branched out, and ended up going back to school for it.

MC: What inspired you to create this game?  What do you hope players get from it?

Yvvy: The inspiration was more of a deep-seated sorrow over the recent events. Two Black men were killed by police within 24 hours of each other, and after watching part of the video of Philando Castile, and hearing about his small daughter, I just felt really heartbroken. I wanted to make something that spoke to that experience.

What I hope players get from it is hard to quantify. Maybe a shocking realization that in today’s world, black people have been murdered by police for very little or almost nothing. 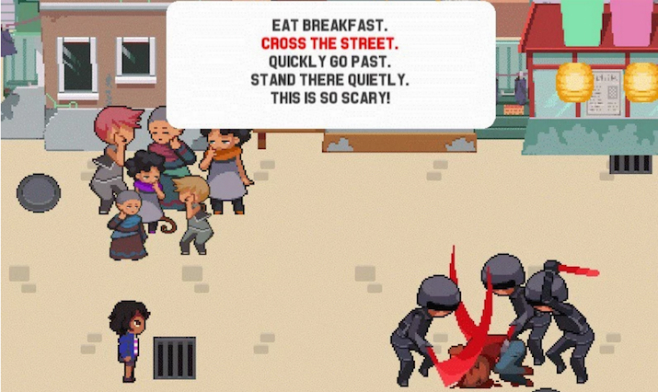 MC:  What tools did you use to create it?

Yvvy: Game Maker is the engine, and Photoshop was for the art.

MC:  What kinds of indie games and serious games were you inspired by?

Yvvy: Honestly I didn’t have anything particular in mind while making this. I imagine inspiration came from somewhere, but more than that I just wanted to give a very brief experience.

MC: Anna Anthropy recently criticized the idea of using a game to generate empathy for its tendency to over-simplify complex issues and to reinforce some forms of privilege.  What do you think about this?  Can games teach empathy?  Should they?

Yvvy: I think Anna’s completely correct. I have had at least a couple people play this game and give me a very loud indignant attitude about it. I do not expect that people who have their minds made up about how the world is going to be will change it or see the light after playing this game. I’m more looking for people who were already on that precarious balance of belief. People who maybe needed just one more drop to have understanding.

Can games teach empathy? Absolutely. However, this is a slow, extensive process that involves representation in media for long periods of time, demonstrating people in multiple situations and dealing with all kinds of experiences. I think that if one expects a single game to teach empathy, they’re not in this for the right reasons.

It’s been demonstrated in studies that representation in fantasy media causes people to humanize those displayed a bit more, but for this to be useful and worthwhile, we need to have this everywhere. All I can do is make a few games by myself. But if 20 people, or 100 people, or 1000 people are making just a few games, now that’s tons more representation, and I do believe that will do some good in the long run.

SHOULD games teach empathy? If by that, you mean should they contribute to it through representation? 100% absolutely yes, without a doubt.

MC:  What tips or suggestions would you give to developers interested in making serious games?

Yvvy: Unless you’re an experienced engine dev, don’t make your own engine. Your first game doesn’t have to be small, but expect to take breaks to make small games for practice along the way. Use smaller projects to help fund larger projects!

Is a College Degree Needed to Become a Game Developer?
Previous Post

What’s in a Name? Everything.