You wouldn’t be terribly wrong if you said the Call of Duty games are largely similar to one another. After all, they have followed the same basic formula, both mechanically and in narrative, since Modern Warfare. It’s a series whose nuances are often lost to outside observers, in much the same way that each year’s Madden looks like the previous to people who don’t love football.

It’s interesting, then, that this year’s Call of Duty shakes up the formula so thoroughly, so completely, that it doesn’t really feel like a Call of Duty.

One of the constants of Call of Duty is that you will always be pit against some foreign nation, usually one that is currently posturing toward, or 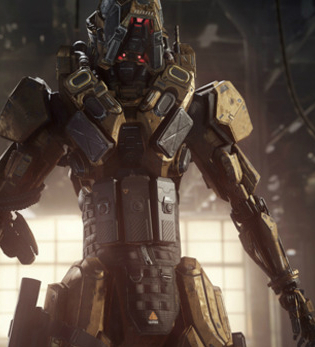 otherwise annoyed with, the United States. Then you sprinkle in a little generic intrigue, some gratuitous murder scenes, and suddenly you have a Call
of Duty plot! Whether it’s the Russians (Modern Warfare series and Black Ops), revolutionaries (Blacks Ops 2), or even private militaries (Advanced
Warfare), the antagonists are ultimately interchangeable: it’s America versus everyone else. Hoorah!,
and all that bravado.

Black Ops 3 almost completely discards this. Sure, there’s the “Winslow Accord” and “Common Defense Pact” (AKA sci-fi NATO and Warsaw Pact), but they play little to no role in the actual story, and serve mostly as exposition filler to give you your cybernetic implants. After the “real mission” starts, they play no real role in the actions you take. Instead, the story focuses on two squads: yours, and Taylor’s. You are chasing Taylor and his squad as they uncover a mystery of dramatic proportions in the ruins of Singapore.

Then there’s the plot. Most Call of Duty games tend to focus on things such as honor, commitment and sacrifice, but Black Ops 3 focuses on something even more personal: sentience. As you track Taylor’s squad through Egypt and Singapore, you find out more about an AI that is spreading like a virus through anybody implanted with a Direct Neural Interface (read: thing that links your mind to computers).

This AI, Corvus, is newly sentient, and is undergoing an existential crisis. Unfortunately, this crisis means it is leading cybernetic soldiers and robots to wantonly murder people in bizarre, ritualistic ways.

This plot setup allows Call of Duty to explore themes of human augmentation, mental breakdown, the nature of sentience and even the afterlife. While it doesn’t approach them as intelligently as a cyberpunk novel such as Neuromancer or Snow Crash, it’s far smarter and more strange than a Call of Duty game has any right being.

It also uses these themes to hint at criticisms of players being the characters they portray, with characters remarking on the nature of having an AI control you, and who “the bad guy” is, or will be. It’s clever, but subtly so, and buried beneath all the typical trappings of a Call of Duty game: grunting, explosions, gunfire, etc.

Black Ops 3 barely feels like a Call of Duty game at all, and that’s something really special.

Our Conversation About Portal Knights: A Review Story
Previous Post