Playing Nina Freeman’s Cibele took me back in time to my high school days, when every lunch period revolved around games of Magic: The Gathering. I was the only girl in the group, and, of course, I had more than a few furtive suitors, which suited me fine as my as-yet-undiagnosed anxiety made it difficult for me to conceive of dating in the way that I saw other kids my age doing.

My few boyfriends and I used games, comics, cult movies and other obsessive forms of geekery as a substitute for the sexual energy we had no idea how to interpret, let alone express for one another. Our hobbies were both the medium through which we expressed our affection for one another, and the thin membrane that prevented us from becoming truly intimate (both physically and emotionally).

Cibele is an interactive re-telling of Freeman’s first sexual experience with a partner she met in an online game. For the most part, it puts us into a first-person view through Nina’s own eyes, though it
doesn’t look like your typical FPS. Instead, our computer screen becomes hers. We browse around on her desktop, rifle through folders of poetry homework, read through chat logs, and scrutinize collections of old selfies. Nina herself never leaves her computer, but through her online avatar, Cibele, we venture into the fantasy world of Valtameri, the place where she first meets her crush, Ichi, aka Blake.

Occasionally, however, these scenes of computing as Nina are broken up by live-action footage of the teen girl (played by the developer herself) taking pictures to send to her online beau. These abrupt shifts from the cartoon world of Valtameri to the real Nina’s room are jarring and uncomfortable in their intimacy. I always found myself relieved to flee back to the safety of her game. Both of us felt much more at ease there then we did in her own skin.

The game-within-a-game is mindlessly straight forward (perhaps these characters are already max level and are simply grinding for loot?); the real action takes place in the voice chat taking place between Nina and Blake. Their flirting styles are painfully self-deprecating in way that was achingly familiar to me as I reflected on my own teenage romances. 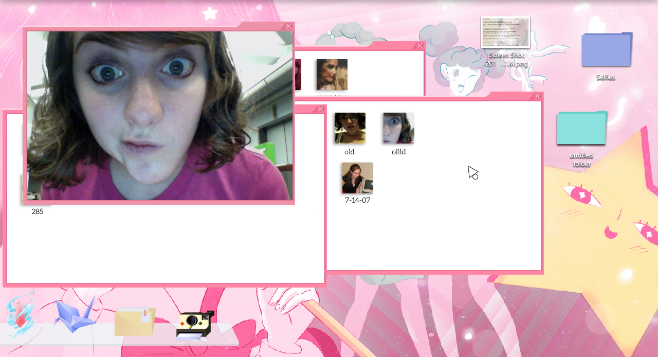 Neither can really admit to themselves that they are lovable, that they are capable of making real connections, and so they use boss raids and item runs as makeshift screens to justify their spending time together. When they finally do decide to meet up, the fragile bubble they’ve constructed around themselves bursts and their first sexual encounter is also their last.

But the game ends on a wistful note, as Freeman reflects that, in retrospect, she is glad that her first foray into love and sexuality worked out the way it did and with the person that it did. As a geeky girl with a lot of her own awkward relationship baggage, I found this exploration of bittersweet memories to be quite cathartic.

The Cruel Tutelage of Pat Morita, or: How I Learned To Play Magic the Gathering.