Growing up in LA, I couldn’t step more than — sorry — drive more than 5 feet without seeing an ad. I spent years gazing out a car window, observing a sky littered with dozens upon dozens of billboards. And because I grew up in Hollywood, literally 4 blocks from the actual Hollywood Blvd, these billboards were all for movies and television.

That’s the nature of advertising in Hollywood. Hell, that’s just the nature of existence in Hollywood. My father always told me, “If you’re young and live in LA, you’re probably working (or trying to work) for Hollywood.” Only an LA native can tell you what #FYC means. For reference, it is the hash tag TV shows started using for their “For Your Consideration” billboards. Oh, you don’t know what those are? It’s really about the Emmys. Yeah, LA is weird…

Living in this environment where my eyes and ears are apparently worth something, I learned to dissect an ad within seconds. What was this ad about? Was it something worth my time? Or was it another throwaway show, one to add to the ocean of crap television?

Luckily for me, once I hit my mid-teens, LA ads started branching out into the realm of videogames. It was a welcome change of scenery, you know, since the billboards weren’t going anywhere anytime soon.

In particular, I fondly remember this one specific billboard for The Elder Scrolls V: Skyrim. I passed by 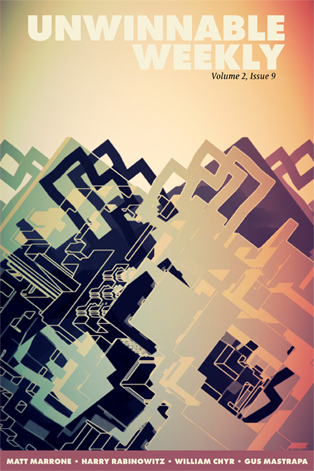 it every morning going to school for at least a year. Separate from the fact that I was looking forward to Skyrim, the ad was memorable because it was actually good.

See, making a good billboard ad is hard. I’m not sure where you all stand when it comes to marketing (although I have a good guess), but getting people to buy something simply from looking at your ad seems nearly impossible. Which is why I still remember this Skyrim ad. It made me want to buy Skyrim.

Over half of the canvas is devoted to the protagonist. He looks grizzled, Northern, and generally badass. He’s decked out in steel and furs, topped off with the iconic(?) downward pointed horned helm, covering his head.

This is all fine and dandy and appealing to the average male teen looking for a good fantasy, but what really makes this ad go from “acceptable” to “actually good” is what the rest of the space is devoted to: the setting. The main dude-guy is surrounded by a bright white background, filled with shrouded, snowy mountains. A tall peak looms above the scene, with the actual tip sticking past the confines of the billboard. Perhaps most important of all, the main macho-man has his mouth open, exhaling. You can see his breath.

You’ve been reading an excerpt from Unwinnable Monthly Issue 61.