Hello Dear Reader, Ian here. We have one review this week and it’s a good one. I wish we had more but, and I’m gonna get real here for a second, I didn’t read a single comic this week. I was busy helping to save the Multiverse at Stu’s bachelor party all weekend. So, you’re welcome for that. I did take a look at Comixology today and saw they have a helluva Batman sale. I highly recommend you snag some of the Legends of the Dark Knight comics in that batch!

Without further adieu, sit back, relax and read Sal’s review of Power Cubed (then go snag it at your local comic shop).

See you next week! 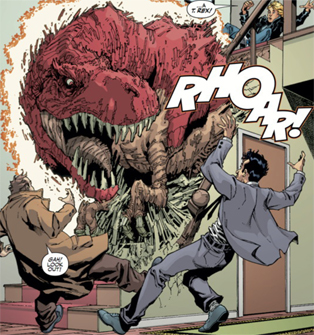 Resuming my “hey, why don’t I try something new?” adventures, I find myself reading Power Cubed #1 this week. The issue’s front cover intrigued me with a question, one that is central to this new mini series: “What if you could create anything?” Also, Dark Horse described one of the characters as a “bumbling Nazi scientist” so I had to give it a go.

Power Cubed is the story of Kenny, a freshly turned eighteen year old boy with an overactive imagination and an ever-present leather jacket. Kenny isn’t happy at home, is somewhat estranged from his well-meaning dad and doesn’t know what he wants to do with his life. Dad happens to be an inventor of things, and wants to give Kenny a boss birthday present, hence the magical cube from the title. This cube can turn things into other things, and apparently our bumbling Nazi scientist, Dr. Cruel, desires said cube. Even more bumbling are Dr. Cruel’s henchmen, who appear at Kenny’s house, demanding the cube. From here, hilarity ensues. Also, lots of danger.

The action here is swift, with minimal time for exposition (hey, this is a mini series, so we’re limited on time!) and that exposition comes from a character called Click, a self-proclaimed Jiminy Cricket/conscience created by the magic cube. The mood is thankfully much less angst-y than I anticipated, this being the story of a teenager. How much of Kenny comes from writer/artist Aaron Lopresti’s own young self, I wonder?

So if you’re in the mood for something fast-paced, something fun, and something involving a dinosaur, then Power Cubed is for you. I hope the T. Rex doesn’t turn anyone off, as I think it sticks around for a while.