This is a reprint of the letter from the editor in Unwinnable Weekly Issue Twenty-Four – check out the excerpts at the end of the post. You can buy Issue Twenty-Five individually now, or purchase a one-month subscription to make sure you never miss and issue! 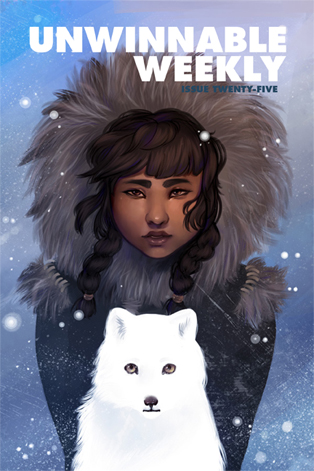 “So who is Cassandra?”

That’s the question I was waiting for my girlfriend to ask, the question that was going to lead to one awkward conversation I didn’t want to have. Knowing me, I’d try to deflect.

“A Trojan with the gift of prophecy and the curse that no one would believe her,” I’d offer, innocently.

“Not that Cassandra. The one you’ve been talking about on Twitter.”

“Oh. That Cassandra,” I’d say, completely stumped as to what to say next.

That Cassandra is a character in Dragon Age: Inquisition (and also Dragon Age II, but I didn’t play that one). In the opening moments of the game, it is clear she hates my guts. Even after 20 hours with her fighting every battle at my side, I am pretty sure she doesn’t like me. If there’s been a thaw, it is an imperceptible one. She’s a true believer, I’m an atheist. She thinks magic users are the most dangerous people in the world, I go around giving them their freedom willy-nilly. She can also kill stuff better than me and has an amazing, if indeterminate, accent. In short, I am crazy about her.

In the perfectly reasonable way a grown person can be crazy about a fictional characters in a videogame, that is. I mean, the romance subplots are half the fun of BioWare games these days. They’re practically dating sims with a lot of fantasy warfare clutter in the background.

I don’t honestly know what’s worse. Having your games-adjacent significant other think you’re cheating on them, or trying to explain to the appeal of trying to date a videogame character.

No, wait. I do know which is worse. That’s an easy one, actually. That’s why I told my girlfriend the other night about Cassandra over dinner. She thinks its hilarious. And she thinks Sera is cute. And I think she’s secretly disappointed I’m not chasing Dorian’s mustache.

In this week’s cover story, Brian Crimmins digs deep into the art of Never Alone. Matt Marrone rejoices at the return of Twin Peaks in 2016. I ponder my relationship with my videogame avatars and their appearance. And, finally, Daisy squares off with the giant spider in the latest installment of Gus Mastrapa’s Dungeon Crawler.

Last weekend was Thanksgiving in the States – I hope you had a great one. This is our last regular issue of the year. Next week is our silly Holiday Special Issue, which we’re giving away for free, because giving is what the holidays are about, right?

We’re currently in the midst of our subscription drive. Please spread the word! We’re only looking to add 150 subscribers to the pool, and new sign-ups get our entire back catalog for free. We also do gift subscriptions. Hit me up at stuhorvath@unwinnable.com to learn more, or for any reason at all, actually!