This is a reprint of the letter from the editor in Unwinnable Weekly Issue Thirty-Three – check out the excerpts at the end of the post. You can buy Issue Thirty-Three individually now, or purchase a one-month subscription to make sure you never miss an issue! 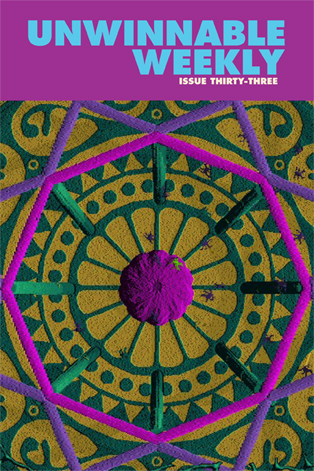 I’ve been working on a massive story about Dungeons & Dragons. Rather than just ruminate on the game, I’ve decided to do some real journalism and try to talk to some of the folks who designed the game (no, I won’t tell you what it is about, its a surprise).

I have learned some things.

First, I learned that I didn’t know much about the people who wrote these books that I have literally pored over for decades. Some (Zeb Cook, Jeff Grubb, Ed Greenwood) are familiar at a glance, but I don’t know more than that. All this time, I think I chalked it all up to being, on some primal level, Gary Gygax’s work.

Second, when I finally disabused myself of that notion, I realized just how challenging it must have been to work on the early D&D books. Most were written by one author over the course of several months. I look at Jeff Grubb’s Manual of the Planes and, even knowing that a good portion of the contents are compiled from other sources, and I am in awe. I could never write something like that.

In some way, I realized that these guys and gals have been heroes to me for a long, long time, without me realizing it.

Third, every last one of them has been gracious, accommodating, unpretentious and eager to talk about their work. They are giants, but they are humble.

This week, Matt Marrone stumbles upon a secret about Goodfellas that is too big, too inconceivable to keep to himself. Luke Pullen delves deep into the weird Russian game Vangers. I vent some spleen about steampunk and The Order 1886 and Gus Mastrapa brings us the latest installment of Dungeon Crawler.

That D&D podcast is coming soon, promise, and we’re getting back in the Unlistenable saddle as well.

I’ll have more info regarding the new mag, Exploits, next week too.

Holler if you need me: stuhorvath@unwinnable.com.

It begins with an eviction. A worm-thing with human mouth and hands tells you, its six-eyed face popping in and out of its green foreskin, that you must leave this cosy burrow and go ‘up, into the light.’ You are some kind of prodigy, something so horrible that even these maniacal freaks, the survivors of something called the ‘Spawn Soup,’ think you’re beyond the pale. You have to leave.

The gear is one of the most identifiable symbols of purpose, of function. Steampunk has subverted that, stripping the gear of purpose and turning it into a bauble, a decoration, toothless. This is anti-utility, the quintessence of form over function.

The spider hovered over them, slowly raising a single leg. The deadly spear tip was now blunted and broken, but there was no doubt that the talon could ruin Daisy with a single thrust. Despite all the bravery she’d shown since falling into these caves, Daisy could not bear to watch. She took a breath, closed her eyes and let death come.