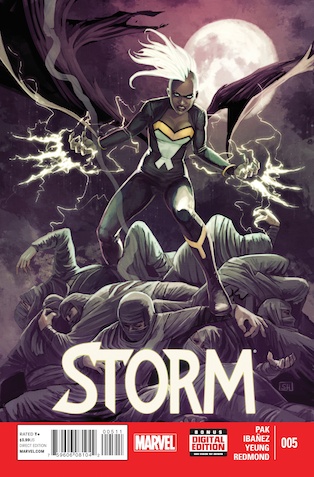 I first came across the hashtag #SaveStorm right before Thanksgiving. Storm’s writer Greg Pak shared a promotional free download code for Storm #1 accompanied by the aforementioned hashtag. This happened shortly after November 19, when CBR Assistant Editor Brett White pointed out the need to save Storm by revealing the numbers. Recently Marvel canceled Elektra and She-Hulk; She-Hulk #9 sold 21,418 copies, while Elektra #7 sold 15,021 according to October sales charts. Storm #4 sold 19,862 copies, which puts the book smack dab in the middle, performance-wise.

I’ve been reading Storm and find it to be one of the best X-Men comics Marvel is publishing. Pak and artist Victor Ibanez’s  Ororo Munroe hearkens back to the warrior who led the X-Men and endeared herself to the hearts of 1980s and 1990s X-Fans. Storm is confident and compassionate; she’s also sporting the mohawk again, so she’s got that punk rock attitude we haven’t seen in the character for some time. Pak’s Storm is the best we’ve seen in years.

In the first issue, Ororo bucks politics by using her powers to help a county under the thumb of an Anti-Mutant dictator. The second issue follows up on the Storm vs. Callisto rivalry, capitalizing on the characters’ history while adding another layer to their already complicated relationship. The third issue explores her relationship with Forge. Issues four and five showcase Ororo mourning the loss of her friend and recent lover, Wolverine. Pak is in Storm’s head and he’s telling stories worthy of the weather goddess.

As good as Pak’s scripts are, Victor Ibanez’s art is the star of this book – simply put, he draws a helluva Storm. He captures Ororo’s majesty as she revels in her powers and excels and in drawing the tenderness of her quiet moments. His storytelling goes from intimate to epic and flows nicely. I mean, this is a comic where Storm tosses a tank aside on one page and then has a teaching moment with one of her students two pages later. This book moves!

So if you like Storm and didn’t know she has her own comic, go pick up the latest issue. If you buy All New X-Men or Uncanny X-Men or any X-book really, giveStorm a shot. She’s one of the most recognizable and popular female superheroes out there and a book this good should be read by a lot more people.

And if you want to help save Storm, you can do so right here. 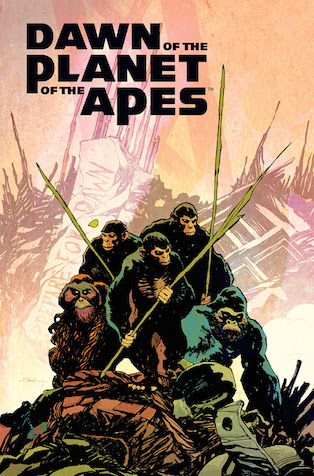 Dawn of the Planet of the Apes #1

In the human half of the story, apes aren’t the only threat to survival. Humans might be their own worst enemies at this juncture of the post-apocalypse. The feel is haunted and bleak, reminiscent of Cormac McCarthy’s The Road. Dan McDaid’s art and Jason Wordie’s colors fit Dawn of the Planet of the Apes well, dark yet distinct.

Dawn of the Planet of the Apes is a six-issue limited series, which makes for tighter storytelling than an open-ended book. Boom!’s previous forays are enjoyable entries into the Apes universe, but their two mini-series seemed stronger. The ongoing books started strong but meandered and were prematurely cut off. The ending Boom! finally gave readers was handled sloppily (forced through one-shots that came months later and months apart).

The original Planet of the Apes series has cemented its place in sci-fi culture, but the promising new film series is ripe for the fleshing out. I’m excited about this mini-series and others that may lay beyond. 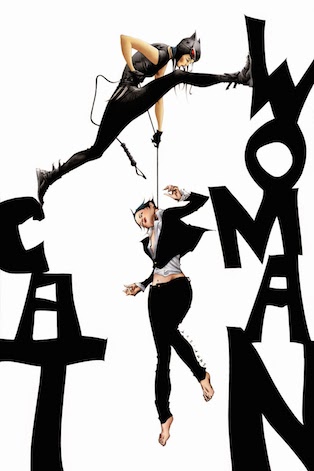 The cover of Catwoman #36 sets a harsh tone for the current incarnation of the Catwoman title. Selina Kyle is very much tied up by her alter ego, to the point that people in her world wonder if she can survive without being Catwoman. Like last issue, Kyle spies Catwoman in the shadows while ruminating on her balcony. Is she real or a vision? This time Catwoman has come for real and delivering a message: the Cat shouldn’t support crime, she should fight it.

Kyle continues to work towards unifying the direction of Gotham’s crime families. She’s not clear how things will pan out, but knows that being decisive and sticking to these decisions is crucial for her mission to succeed. She’s willing to dabble in the narcotics trade, if only to ultimately get drugs off the streets.

Issue #36 is my second serious venture into the world of Catwoman. I dipped into some early New 52 issues for back story but found these too light on substance and too heavy on cleavage and leather. Genevieve Valentine is taking Selina Kyle/Catwoman in the direction worthy of such a powerful character. Garry Brown and Lee Loughridge, on art and colors respectively, nail the tone Catwoman needs. I hope DC keeps this creative trio on the title for the long haul.

I like that Catwoman is highlighting the human criminal saga of Gotham, as I get my fix of costumed heroes and freaks in the Batman books.  Mix cop procedural with some crime syndicate intrigue, add a few double crosses and punchy dialogue and you get a fresh take on pulp-noir drama.

Boom! Studios, Catwoman, dawn of the planet of the apes, DC, Marvel, storm