This is a reprint of the letter from the editor in Unwinnable Weekly Issue Thirty-One – check out the excerpts at the end of the post. You can buy Issue Thirty-One individually now, or purchase a one-month subscription to make sure you never miss and issue! 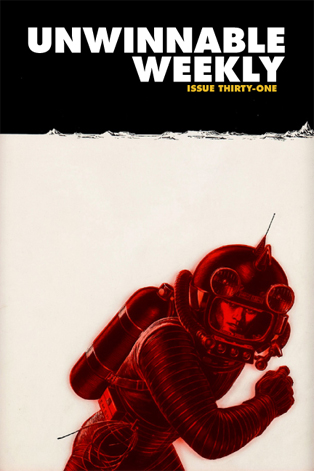 You should probably play Darkest Dungeon.

I am usually not keen on Early Access releases , but something about Red Hook Studios’ roguelike dungeon crawler really caught my fancy. (Side note: I love roguelikes, I’ve had NetHack installed on every laptop I’ve owned since 2001, so this isn’t a complaint at all, but – there sure are an awful lot of roguelikes out there, right?).

I am not going to waste much time with telling you about the gameplay or the punishing difficulty – other folks can’t wax rhapsodic about that. I want you to play Darkest Dungeon because of the aesthetics. God’s below, the look of this game is something I have wanted for years. Heavy black lines and hints of Mike Mignola’s (Hellboy) influence abound (that skeleton mage guy looks a little like Vladimir Giurescu’s dad, doesn’t he?). And the narration: that sonorous, Christopher Lee rumble slowly spills out every syllable of the purple prose, elevating even the most straightforward statements to frenzied Lovecraftian climax.

I am excited to tell you this not because Darkest Dungeon is basically everything I love rolled up into one videogame (though it is). Rather, I am excited because it feels good, in that elusive way that videogames do. The aesthetics (moody, horrific) and the mechanics (high difficulty, character psychological trauma) support each other so well, are so united, that firing the game up will immediately set your neurons firing. You’ll find yourself nodding and muttering, “Yes!” even as your characters die terrible deaths, over and over again.

This week, Matt Marrone tells us about his life in an alternate universe as a writer of short stories. I put together a list of fifteen excellent horror movies you’ve probably never heard of (this story will appear soon online and will be updated as I watch new, worthy movies). L. Rhodes chides scientists who chide science fiction writers for not being scientific. And, finally, Daisy kicks some spider-butt (do spiders have butts?) in the latest installment of Gus Mastrapa’s Dungeon Crawler.

In other news, I got engaged last Saturday to my girlfriend Daisy (no relation to Gus’ orphan adventurer). That means I will be probably be writing a mushy story about love and Crusader Kings 2 or something in the near future. Brace yourselves.

Oh, and if it would just not snow on a Monday, we’d record the first episode of the Drunken & Dragons podcast, but Old Man Winter apparently hates Dungeons & Dragons. Coming soon, though, promise!

Holler if you need me: stuhorvath@unwinnable.com

I will no longer take myself seriously after about five beers. Until then, I am left alone to work. When my back gets a little creaky and I’m ready for a leak, I leave my perch and walk over to the bathroom – its walls plastered with old prints, a million stories still left to be told – and I piss like a goddamn racehorse.

“Tales from the Boat House,” by Matt Marrone

Being an enthusiast of the horror genre comes with a deep hunger for more horror. It doesn’t matter what form it takes so long as it is quality fare. A steady diet of mediocre horror is the same as starvation. And so, we hunt. Through bookshelves and magazines and review sites, we scour, looking for our next meal.

“The Unseen,” by Stu Horvath

If part of your work is explaining complex scientific ideas to a popular audience, then it makes intuitive sense to try to connect those ideas to popular culture. By definition, pop culture commands a large audience, so hooking a scientific topic to, say, a science fiction movie or a comic book makes it easier to repackage it for the maximum number of readers. That’s how you end up with books like The Physics of Star Trek or (less plausibly) The Science of Harry Potter. And if that sort of book helps people understand scientific principles, so much the better.

“KILL!” Daisy screamed, pointing her dagger square in her enemy’s eyes.  And, as if responding directly to her command, the heavens dropped a torrent of rock and flaming stone on the enormous spider.