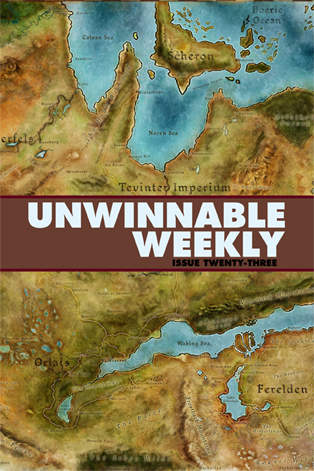 By the time you read this, I’ll be setting up tables for Geek Flea.

This is our eighth, which means we’ve been doing it for four years. This seems absolutely insane.

Geek Flea is, as you might gather from the name, a flea market for geeks and the things they collect. Or, at least, it started out that way. Now there are so many crafters, bakers, musicians, film makers, cartoonists, roller girls, painters, sculptors and taxidermists on the alumni list I have no idea what to call it other than a great time.

In essence: Unwinnable swoops into the First Presbyterian Church of Arlington and fills their gym and lecture rooms with vendors selling their sundry wares. DJs spin rock ‘n’ roll all day. The church ladies sell baked goods. Unwinnable’s Editor at Large, Chuck Moran, gets on the mic at hourly intervals to draw raffles, talk up our sponsors and generally make sure everyone is having a fun.

Sometimes, the local drunk shows up dressed in a homemade SpongeBob costume.

Then every one who is inclined goes to our local Spanish bar and grill to eat, drink and complain about how much our feet hurt.

Like I said, it’s a great time. We have a fantastic community here in North Jersey and they make Geek Flea two of the very best weekends of my year. You should come!

Protip: the empanadas usually arrive at the Chucky Farms table around one o’clock and don’t last more than 30 minutes. Be quick!

In our cover story, Joe DeMartino investigates the strange rise the Dragon Age character Cullen from disposable background character to a major part of Dragon Age: Inquisition. Matt Marrone reveals The Dick Van Dyke show that could have been. Ian Gonzales chats with the gents behind the new superhero comic Stray. Finally, Gus Mastrapa’s Dungeon Crawler returns with its latest installment.

Questions? Comments? Want to reserve a table for the next Geek Flea? Hit me up at stuhorvath@unwinnable.com.

P.S.: Unwinnable’s own Matt Marrone won’t be at Geek Flea this time around because he foolishly planned his wedding for the same weekend. Wish him a warm congratulations, why don’t you?

The scene is the Petrie home, though the house is entirely different now and the name is no longer pronounced Pet-tree but Pea-tree. Dick Van Dyke’s character, Rob, is played by a sad-sack Reiner. His wife Laura is Barbara Britton, a far less engaging actress than the well-on-her-way-to-becoming-iconic Moore. Wait, what?

[Cullen’s] fans congregate on Twitter and joke back and forth with Greg Ellis, Cullen’s voice actor. All of this would be normal for a well-known character – just look at the response, say, Benedict Cumberbatch’s Sherlock gets on Twitter – except that Cullen was, as of the first game in the series, almost a footnote.

“I’ve never hidden from the fact that a lot of [Stray] is autobiographical,” Delsante says. “A lot of those decisions are decisions I made in my life.”

Her heart sunk. Of the dozens of caves she’d scouted this was the only one that bore any sign that another soul had passed through. If there was a way to the surface it must be through here. She was afraid to contemplate what had made all these webs. Millions of spiders. Perhaps.

On Our Sponsor, 80s Tees