Avengers & X-Men: Axis is a big, dumb superhero event crossover. It’s not exactly the most subtle comic in the world. Honestly, there are points where it verges on camp. However, those over-the-top moments work in the book’s favor. Reading a core group of Marvel’s superheroes delve into their selfish side and seeing Carnage ape Spider-Man’s “Friendly Neighborhood” catchphrase after saving a family is a hoot. 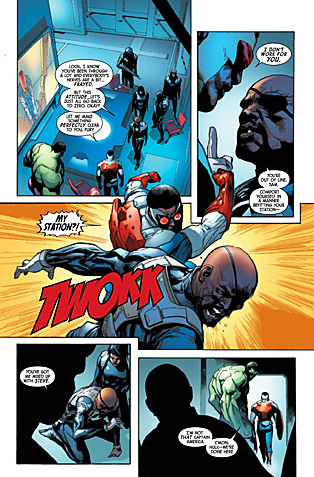 Axis comes on the heels of “Original Sin.” It hasn’t even been two months, and Marvel hasn’t completely explored the fallout of that story. Instead, the first three issues of Axis catch readers up on Uncanny Avengers and Magneto and then focus on the Avengers and the X-Men in a giant battle with Red Onslaught, a combination of Red Skull and Onslaught – basically a super telepathic Nazi. It was a huge fight, and at the end, Scarlet Witch and Dr. Doom performed an inversion spell that was supposed to bring in the remnants of Charles Xavier’s consciousness while subverting the Red Skull. Whether or not it worked is yet to be revealed, but the heroes and the villains walk away from the battle acting strangely.

Avengers & X-Men: Axis #4 picks up two weeks after the previous issue and delivers the goods the event promised – EVIL SUPERHEROES! This isn’t a subtle change, either. Captain America, Thor, Scarlet Witch and Medusa realize that they’re no longer burdened with caring about the greater good. None of them are particularly concerned – in fact, they decide to kill the comatose Red Onslaught so no one tries to make them go back. Meanwhile, Iron Man goes to San Francisco and cuts off the national anthem, announces a smartphone app that will make people pretty and then takes a drink of champagne. Oh, and the X-Men? They’re going to team up with the reborn Apocalypse to wipe out the Avengers and the human race.

This is also a comic that gives us Kluh, the monster the Hulk becomes when he’s sad. All Kluh wants to do is eat people and kill everything.

Look, we all know that most of the heroes will go back to being heroes at the end, so seeing them in such a dire mess is a helluva entertaining read. Yeah, the Avengers and X-Men are jerks who have no interest in saving the world anymore, but that’s cool. Anyone remember Heroes Return? Enjoy the ride! 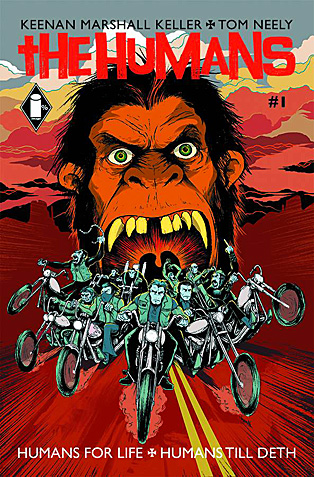 I have a healthy fear (and morbid fascination) of bikers. Mind you, this isn’t all people who ride motorcycles, but those who identify as outlaw fringe one-percenters. This fear-fascination developed from two primary sources: a good friend’s father, and Hell’s Angels: Three Can Keep a Secret if Two are Dead, an unauthorized biography of the titular motorcycle club by journalist Yves Lavigne. It’s telling that Hunter S. Thompson’s Hell’s Angels is not on my list. So while The Humans was a fun read, I’m also a little scared inside. Even if the bikers in this tale are apes.

Sticking with the fun part, I stumbled across The Humans on my Wednesday comic shop rounds, thinking at first it was another Planet of the Apes series. Not at all! Like my peers who regularly buy comics, I have to be shrewd about picking up anything new on a given week, taking into consideration cost, space and the danger that I might become obsessed with yet another monthly series.

The Humans is worth the ride on all fronts. The tale is total trash biker flick exploitation: a memorial service turns into a brawl, an ape is doing lines off a (presumably?) ape-hooker’s backside and still another brawl turns into a party. The entire tone makes readers feel like it really is 1970. The art brings to mind many great 1980s and ’90s garage/punk record covers (especially those by Cliff Mott or Coop). This doesn’t surprise me, considering the musical taste of the creators of this book. Included are song downloads of current garage/punk/outsider rock and rollers Smelly Tongues and Zig Zags. If Thee Cormans or Mummies aren’t tapped for songs in upcoming issues, someone has done something wrong.

As if all this wasn’t enough, there’s a club newsletter and a callout for a letters section. Spoiler alert: there’s plenty of ape nudity, and not always the kind you see in a zoo.