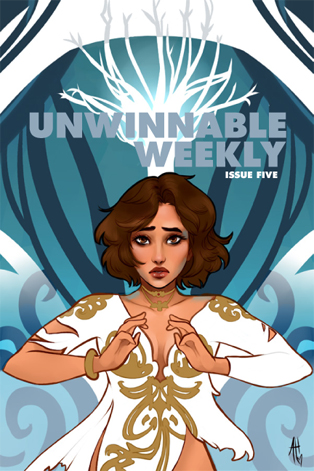 Ever have one of those dreams, right when you are at the edge of deep sleep, when you are walking somewhere only to suddenly trip? You know the one – you awake with a start, flailing embarrassingly, because you brain tricked your body into thinking you were actually falling, even though you were safe as can be under the sheets.

For Gus Mastrapa’s dungeon crawler, her fall was the first step in a long and dangerous journey into adulthood. Being vaguely adultish myself, I can sympathize and hope that she winds up heavily armed.

Walt Disney had an idealistic resolve, but not enough time and, as Matt Marrone reveals, that led his visionary ideas for EPCOT to fall into more conventional hands after his death.

Meanwhile, I ponder the philosophy and psychology of falling that was brought to light by the game appropriately named The Fall and, finally, in our cover story, Rob Haines examines the more personal fall from grace chronicled in Prince of Persia, a game whose very mechanics centered around falling.

Thanks to folks like Icarus (rightly?) and Lucifer (wrongly?), falls get a bad rap as a kind of punishment, an object lesson to discourage a certain kind of behavior. The truth is, though, we all need to fall every once in a while. Sure, no one ever wants to fall, but if you never hit the ground, you’ll never learn to pick yourself back up again.

After all, falling is the closest we come to flying.

This is a reprint of the letter from the editor in Unwinnable Weekly Issue Five. You can buy Issue Five individually now, or purchase a one-month subscription to make sure you never miss and issue!

The App Hole: Pulled Out the Root