When you’re the first born, you are a pioneer – a child explorer navigating a giant, confusing world. If you’re lucky there are adults looking out for you. Even so, it’s up to you to make your own mistakes and wander down dead-end paths with no practical guidance from those who have gone before. Parents can tell you what to do and what not to do, but it’s the wisdom of other children that carries the most weight.

Of course, when you’re a little kid, you have zero grasp of these complexities. Your view of the world has little nuance. I just looked at older boys, like my older cousins, with wide-eyed admiration. Before I knew what the world “cool” meant, I understood these older boys to be precisely that.

They were rough-and-tumble dudes – all of them into sports. State champs in wrestling and football. Francis, the oldest, rode a motorcycle, studied nuclear physics and got drafted by the Cleveland Browns. Sometime around 1980, he took me to his bachelor pad and showed me his new CD player – he put on Pink Floyd and broke out a massive laser, letting me bounce the beam around the mirrors in his apartment. Swirling motes of dust and smoke helped me trace the beam in the early morning light. Later, Francis would move to Alaska to race sled dogs. I would keep the Complete Jack London he gave me for decades. 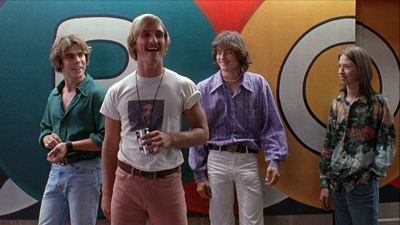 His youngest brother, Charles, was also a star athlete, but his urge to light out took a different form. When Charles was just about done with high school, his mother sent him to stay with us in Florida for the summer. She didn’t tell us he was supposed to be drying out. Eventually my mom found some pot seeds in his OP shorts and got the hint. To anyone else it was obvious. Chuck found all the neighborhood skate rats and conspired with them to build a quarter pipe in our driveway. He had tapes of the B-52s and Soft Cell that he played nonstop. He dragged me, his dorky little cousin of 11, around the neighborhood to hang out in the garage apartments of big kids – where the Rush posters might as well have been shrines to Satan. I sat in on a game of D&D with his buddies, like Sean Penn and his pals from Fast Times. I was appalled when our first loot score was a chest full of cocaine guarded by a naked nymph. “It’s supposed to be gold and magic weapons,” I muttered red-faced.

Even as an adult, I haven’t been able to avoid looking at slightly older, profoundly cooler men with childlike awe and admiration. During my tenure at Hustler it was always Big Brother editor Dave Carnie who struck me as cool as hell. He’s the dude who came up with that “Listen to Black Sabbath” T-shirt. And he’s the dude who respectfully declined to make Jackass for MTV. Though I wonder what great art we missed out on when he chose to take the high road. At least we got a book out of the deal.

I’m over 40 now and somewhat immune to these childlike crushes. But I worry for my son, Halford, who celebrates his first birthday today. He will be an only child with no older sibling to show him the ropes and no younger child behind him to guide or train in the arcane ways of youth. I hope he finds the role models I did, especially the troublemakers and dreamers, to help him appreciate the laser beam in the smoke and, most importantly, to encourage him to make all the right mistakes.

A Dream of Flying