The only thing better than a beerfest is a beerfest next to the house where Edgar Allan Poe wrote “The Black Cat.” 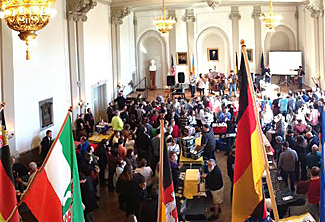 Unwinnable recommends that if you attend Philly Bierfest 2015, at the German and Latvian societies of Philadelphia next year, that you hop across North 7th street to tour Poe’s house – both before the festival, when you’re sober enough to be reverent, and during the festival, when you’re drunk enough to steal a volume of Poe’s work from the Reading Room, sneak it down into the basement, and read stories aloud to your girlfriend about madmen murdering their wives.

Philly Bierfest 2014 (“Bigger. Better. More German. More Beer.”) was a total surprise to us. We were in the City of Brotherly Love last month on a romantic getaway and stumbled upon the festival on the way to Poe’s house.

It started at 1:30, so we took the self-guided house tour first. I love Poe, so I adored the house despite its one immediately apparent and comical flaw: it’s nearly empty.

Sure, they’ve put up some signage and a few artist sketches here and there of what it might have once looked like. But there’s very little else – estimated monthly budget: $187.26 – and there’s even a space where a few scattered photos of random people’s pets, named after Poe and his works, can be viewed. Even the gift shop had nothing I wanted, which is impressive considering I walked through the door basically with my open wallet in my hand.

But the basement? That’s a different story altogether.

Philly Bierfest 2014 cost us $45 apiece to enter. But once you have your wristband, the beer is free and there’s plenty of it. If I had pre-planned this excursion, I’d give you some makeshift, subjective Rookie of the Year beer scores, but alas, I just held out my plastic cup (included with admission!) and let the taps flow. 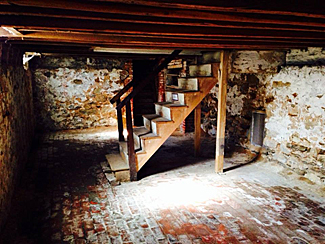 If I had to pick a winner, it was local brewery Yards, whose Schwarzbier (a “black Franconian-style dark lager”) provided my draft of choice when we climbed upstairs to the balcony overlooking the main hall. There we sat with the old and infirm, getting inebriated. We watched the live bluegrass music courtesy of the Keystone Mountain Boys, while laughing at the young folks struggling to weave through the crowd below and the challengers testing their strength on stage by holding an oversized mug of Brauhaus Schmitz’s Beer-Jello at arm’s length while being timed by a serving wench. (You could also arm wrestle a roller derby girl, but my pride kept me from doing that, too.)

There was also plenty of food – some of it free, some of it not – and the day climaxed with an aptly named BEERlesque show, which had very little to do with beer but drew few complaints from onlookers.

But before watching that for a bit, and eating far too many free cheese samples, we stumbled out and headed back to Poe’s.

I wanted to read the Girlfriend of the Year some Poe in my usual frantic, enthusiastic manner, but the comparatively generously apportioned Reading Room was filled with (obviously illiterate) visitors listening to spoken word recordings of “The Raven” on CD. (The Reading Room actually had a pretty neat selection; I ended up downloading Glass Prism’s exquisitely terrible 1969 rock version of the poem from iTunes as a result.)

So instead I found “The Black Cat” among a multi-volume set of Poe’s works on the shelf, and I absconded with it.

If you don’t know – and shame on you if you don’t! – “The Black Cat” is the chilling tale of a lunatic who buries his wife behind a wall in his basement. In Poe’s house, the place where that would have been is made more obvious by the placement of a black cat stuffed animal on the wall. 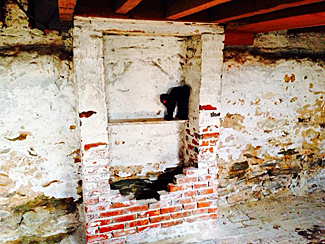 The basement is otherwise empty.

It’s the best part of the house, and with a little liquid courage that waned only ever so slightly when a tour guide passed the door at the top of the stairs, I read “The Black Cat” in an appropriately hasty manner to the Girlfriend of the Year.

At the time she was scandalized by the subject matter and not a little fearful of my intentions, but later she said it was among her favorite moments of the weekend.

Matt Marrone did eventually return the book to the Reading Room. You can follow him on Twitter @thebigm.