You have to hand it to Hayao Miyazaki: the storied animator certainly doesn’t take the easy way out. At this point in his career, he’s crammed enough magical moments into our collective imagination that he could have rendered himself eating lunch for his final project and still get carried off into retirement by waves of adulation.

If he knew any better, maybe that’s what he would have done. Instead, he’s decided to risk alienating people. 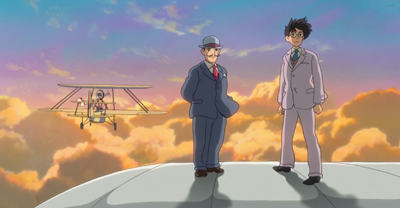 Centered on the life of aeronautics engineer Jiro Horikoshi – the man responsible for designing Japan’s infamous Mitsubishi Zero fighter jet – The Wind Rises isn’t exactly typical fare for a studio known for flights of fancy such as Spirited Away and Castle in the Sky. It is an effort grounded in reality, so much so that its attempt to elevate our minds to a higher plane of thought becomes a daring challenge.

After all, the Zero was not only used to bomb Pearl Harbor in 1941 and wreck havoc during World War II. It also symbolizes the kind of militarism that troubles neighbors and former imperial targets such as South Korea and China. Not surprisingly, Miyazaki’s attempt to portray Horikoshi as a visionary has been flagged as a glorification of Japan’s wartime aggression.

Yet the film makes clear that the country’s war plans are ludicrous, frequently criticizing Japan’s ability and proclaiming with certainty that it will destroy itself along with the other Axis powers. In Japan, where the government is trying to build support for expanding the country’s military capabilities, this has led some to bill the movie as unpatriotic. 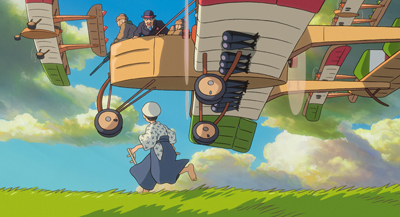 After one viewing, though, it’s obvious that despite the film’s grounded nature, Miyazaki is chiseling away at something much loftier than patriotism and war: It’s Horikoshi the dreamer, the man whose desire it was to build a beautiful airplane and find love in a chaotic time. Speaking to the Asahi Shimbun, the filmmaker said the last thing he wants is for Jiro to become an outlet for Japanese patriotism, and that his goal is to “snatch” the man back from such beliefs.

In this way, Miyazaki’s desire to reclaim the lost Horikoshi resembles ideas given heft by German director Werner Herzog, who not so coincidentally lends his voice to an important character in The Wind Rises. In the past, Herzog has said that while facts create norms, there is a deeper truth still that films can illuminate. This poetic truth, he says, “is mysterious and elusive, and can be reached only through fabrication and imagination and stylization.”

It’s no coincidence, then, that the most visceral and violent scene in The Wind Rises has nothing to do with war. The movie is primarily fixated with re-contextualizing Jiro’s life, but – just as in other Studio Ghibli efforts – perhaps its most searing moment involves the overwhelming power of Mother Earth.

Consider the scene: riding on a train, Jiro is thrust into a chance encounter with a lovely young lady as his hat is blown away by the wind. Just as he peers into the eyes of his future wife, an earthquake rolls through the countryside with such an effortless ferocity it almost seems summoned by otherworldly forces to shatter the placid landscape. Tidal waves of earth rear their heads and crash onto an unsuspecting city. The earth moans like an eerie, ethereal entity as it splits apart, leaving fire and destruction in its wake. 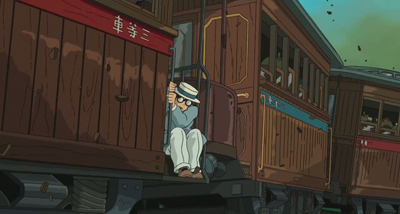 An event this crippling has a way of informing one’s worldview, and the meaning here is as clear as the parallel it draws to Horikoshi’s plight: that we are helpless in the face if the earth’s mysterious machinations. In the face of inevitable destruction, all we can really do is try to chase our dreams and struggle to hold fast to love as it slowly trickles through our fingers.

The act of flying has always been a liberating mechanism in Miyazai’s animated worlds, so rather than dwell on World War II, The Wind Rises presents moments of Horikoshi’s life trapped in amber, softened by the passage of time and by a man enamored with flight and its redemptive possibilities. The film unfolds as an ode to work, diving surprisingly far into the minutiae of Jiro’s labor but never losing sight of the fervent energy driving him. Everything from fish bones to metal screws become worthy of rumination.

In this light, it wouldn’t be a stretch to imagine Horikoshi as a precursor to Jiro Ono from the documentary Jiro Dreams of Sushi, in which the chef claims, “You have to fall in love with your work…You must dedicate your life to mastering your skill. That’s the secret of success…and is the key to being regarded honorably.”

Still, this sentimental portrayal can only survive for so long amid such an ominous backdrop. Miyazaki may have said he found it “pointless to raise the issue of Horikoshi’s war responsibility,” but finally The Wind Rises cannot completely sever the chain between the romantic’s passion and the carnage it unleashed. At one point, our protagonist suggests removing the Zero’s guns in exchange for enhanced aerial performance and is greeted with raucous laughter – gradually, Jiro’s dreams morph into nightmares as he looks out upon a world ignited by war. 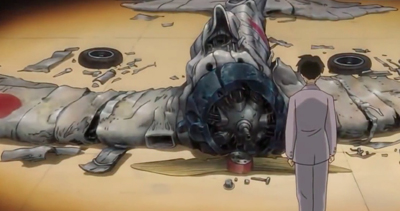 The fact that The Wind Rises can only seem to muster a shrug of the shoulders at this state of affairs is easily one of its biggest weaknesses. The world may be unpredictable, but while the intentions of the earth’s shifting tectonic plates remain an enigma, Horikoshi knows exactly what his invention will be used for. All the dialogue noting that planes shouldn’t be used to make money or fight others, then, come across as too blithe and unconcerned for the situation at hand.

Instead, Jiro and the Japan he inhabits float along in something of a bubble, one that lingers in the mind and preserves a world we can rarely witness, even as it’s all too primed to pop. No matter; The Wind Rises would carry additional power if it grappled more effectively with the ripple effects of Horikoshi’s destiny, but while it doesn’t quite seem to know how to do that, it is unequivocal in laying down Miyazaki’s final marker: that the dreamer, the act of dreaming itself, is so fundamentally important we must follow the path down which it leads, even if it is ultimately torn asunder.