In curating and performing in Dungeon Master: The Quest Begins… at the Peoples Improv Theater in New York City, he has leveled-up the standard improv/comedy show. Through the introduction of a D&D-styled dungeon master, the troupe (read: NPCs) are informed of reactions and emotions by a roll of the (polyhedral) dice. And the effect is wholly entertaining. The dungeon master lends an arcane element of surprise to the show that requires each performer to not only be on his or her toes but to keep it together. Oh, and it’s really funny.

Whereas in the game the dungeon master assumes control of all aspects of a given environment, the role is here scaled back to something of an apathetic puppet master. The true life of the show comes from the performers. Grundhauser and company work off of each other seamlessly, injecting a verisimilitude into even the most inane situations. They build the characters, settings and situations, the “capricious rolls of the dungeon master” meant to enhance the already mercurial experience.

Dungeon Master is also a forum for stand-up comics celebrating their not-so-inner geek. The most recent performance featured Meghan O’Keefe, who delightfully detailed her mother’s suggestions of achieving orgasm by way of the “prehistoric romance novel,” and Josh Guarino, a comedian who celebrates his love of professional wrestling and led a rousing sing-along in Eric’s honor of “Bubbles’ Song” from Trailer Park Boys.

In discussing the future of Dungeon Master, Grundhauser hopes to expand the show and at some point introduce themed editions catering to “geeks of any stripes and non-geeks alike.” “Above all else,” he states, emphatically, “I want the show to be funny. If I ever have a show that is more fan service than laughs, then I’m not doing my job.” The show is still young, but if this last performance is any indication of where Dungeon Master is headed, he doesn’t need a 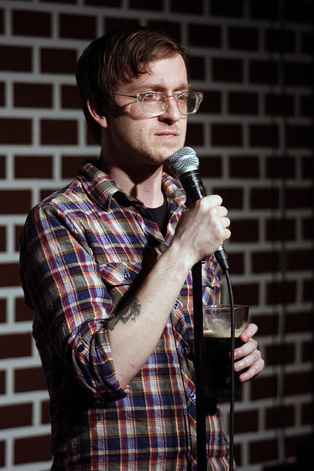 capricious roll of the dice to know that he is indeed doing his job.

Expect good things. The next performance of Dungeon Master will take place July 31, and the PIT is letting the geeks out of the basement and on to the main floor!

You can follow Peter on twitter @peterlangcrime and then buy him a beer at the bar before the show.