After a somewhat misspent youth experimenting with drugs, my biggest disappointment was that I didn’t see a pink elephant. Or blurry demon. Or a talking hot dog.

The time I tried acid was mellow: I felt like I was in a sound bubble moving through the Florida night. And, truth be told, I was inside a pick up truck with Aphex Twin on the stereo. The best thing I can come up with was the time we were in an after-hours club by our house, high on ecstasy. It was well into the morning, so we kept our trip rolling in the dark of strip mall gay club. I walked onto the empty dance floor, the music washing over me, and closed my eyes. I saw blue skies and the kind of hi-res clouds you only see in the South. Over the top of it all was a stock ticker, spooling numbers and abbreviations for I know not what from one end of the sky to another. 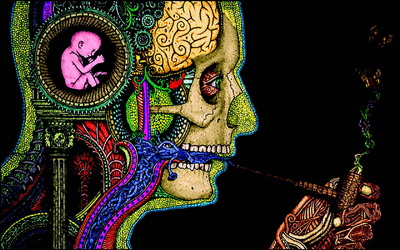 I am not a visual person. In kindergarten I was confused when they teacher asked the children to close their eyes and tell her what we saw. There were dogs and people. Bicycles and ice cream. I only saw the light though my eyelids. The red-orange glow of my blood vessels. And the swimming fractals of leftover light in my eyes. When it was my turn I lied. “A mountain.”

Maggie Koerth-Baker at Boing Boing recently posted about migraine auras, a phenomenon I have personally observed far too often. I was double depressed by the fact that she called them hallucinations. Because my headache induced sightings far outnumber the sparse few I’ve witnessed thanks to drugs. Part of me wants to get on a plane right now and book a trip to the Amazon where I can partake in an ayahuasca ritual and get it over with. I’ll see earth torn asunder and machine elves will spill out of the rip in time and in ten minutes it’ll all be over.

Truth is, I’m a little chicken to mess around with DMT. And I feel like the minute I decided to have a kid I should probably put all that kind of foolishness on hold. 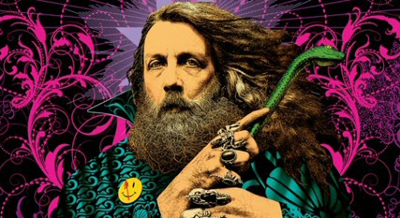 But then there’s always the Alan Moore method. The venerable, and somewhat mad, comics writer claims to be able to reach hallucinatory states without the aid of chemicals. That’s how he communes with the serpent god, Glycon. I don’t have many friends out here in the desert, so regular visits from a talking snake wouldn’t be totally unwelcome.

The closest I’ve ever come to the so-called “natural high” was at a Sunn O))) concert. The drone metal band are known for playing at extreme volumes. Their slow, sludgy chords are held for minutes. You can feel the music rattling your body at the molecular level. Wave after wave of amp blasts wash over you over the course of several hours. And, if the venue permits, they play amid rolling fog, a mist that spills lazily over the front of the stage. The musicians themselves are clad in druid’s robes, casually passing a bottle of wine as they summon the noise from their guitars. At the show I witnessed, the lighting and smoke made it seem that behind the band there was nothing, an endless, black abyss. I imagined that Sunn O))) were channeling the abyss through their guitars and into my body. 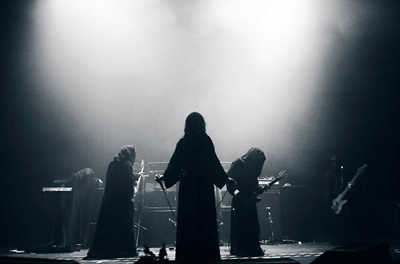 Yesterday, I caught The Desolation of Smaug in 70mm IMAX before it was too late. When I sat down in the empty theater, I was concerned that I had made a poor decision. The sun from outside still lingered in my eyes – a phenomenon which is often a precursor of a migraine. I turned down the brightness on my phone and enjoyed the cool, quiet dark of the theater. I’ve found more often that quiet and dark is a good way to nip a bad headache in the bud. Soon the lights came down and the muffled clatter of the projector began (man, that’s a sound I’m going to miss).

After several hours of dragons, dwarves and hobbits I stumbled into the desert night and climbed into my car. When I spun the wheel onto Highway 111, the main drag through the Coachella Valley, I noticed that the world seemed more intense than usual. The sodium vapor street lights washed everything in golden light. The cloudy sky above felt like a distant ceiling, the palm trees lining the road seemed to reach up and support the heavens. The effect was temporary and subtle, but I rolled with it, enjoying the slightly askew view of my mundane world while making double sure to pay close attention to other drivers. By the time I was halfway home the reverie had passed. I’m not sure if the IMAX screen filled my eyes with dwarven gold or if three hours of quiet contemplation put me in a place where I was more open to suggestion. But whatever that was I’d gladly take more of it. And if Glycon wants to pay a visit tell him I make a mean paella.