As a kid I was always fascinated by weird things. Like a lot of the children of the 80s, I was exposed to a wide variety of cinema at a young age, thanks to the proliferation of video stores. Most of this stuff we probably shouldn’t have been watching but we did anyway, often because it was a science fiction and/or fantasy film, or even a horror film if we managed to get an older kid to rent it (although the guy behind the counter usually didn’t care who was renting what).

Sometimes I would just cycle through the racks at the video store, moving on to each subsequent American Ninja sequel or trying out something because there was a robot in it. 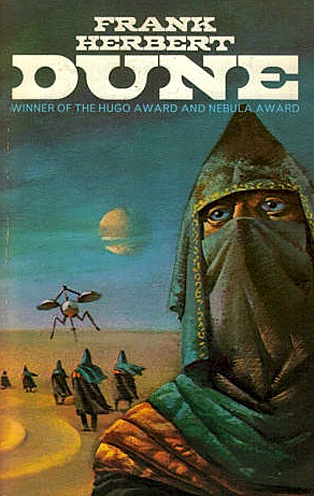 Eventually I made my way to Dune. From the cover it looked kind of bizarre: like a drab Star Wars that never makes it off of Tatooine. I liked the drabness though, and I also liked the crazy special effects and weird ambient score by Toto and Brian Eno. I found the movie itself to be weird and kind of boring initially, but there was something about it that kept making me want to revisit it every few years. If it was on TV I wouldn’t change the channel. Thirty years later, I’m still working out the puzzle that is Dune. Can it be adapted again? My answer is a soft, “Yes.”

On December 14, 1984 David Lynch’s Dune was released. It was met with middling reviews and poor box office, and Lynch distanced himself from the movie immediately after.

Executive Producer Dino De Laurentiis had snatched the rising star director after his critically acclaimed film The Elephant Man. Interestingly enough, there was a long line of directors and attempts at adapting Frank Herbert’s dense and philosophical 1965 novel. These included a previous offer to Ridley Scott, and before that El Topo and Holy Mountain director Alejandro Jodorowsky. Jodorowsky’s attempt was so elaborate and bizarre that a documentary called Jodorowsky’s Dune is currently circulating to great acclaim. The documentary tells the tale about the disastrous production that was to include Salvador Dali and Orson Welles amongst the actors, H.R. Giger and Moebius as artistic directors, and either Karlheinz Stockhausen or Pink Floyd doing the soundtrack, depending on who you asked. Jodorowsky’s film was also going to be about 10 hours long, and of course production derailed like a spectacular train wreck.

After 10 years of being in development hell Dune was finally ready to go, and De Laurentiis was confident that it was in good hands with a director with only two great, but not very mainstream, films under his belt. 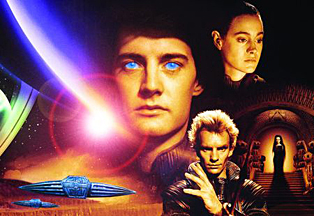 I’ve watched Dune multiple times, and there are a number of things I can appreciate about it. Still, it’s not a very good movie. Having since grown to greatly appreciate the work of David Lynch and the Dune novels, I find this film a weird little novelty to revisit. The vibe of the movie is so surreal and druggy that it does work as a David Lynch film, except with spaceships and explosions. There are a lot of fun and sometimes great interpretations of the source material in the movie, in addition to some obvious misfires. It’s also a product of its time, as Universal and other financing principals wanted another Star Wars.

$40 million went into the production of Dune. Action figures were made, and Marvel Comics put out an adaptation. There were even booklets to be handed out to theater goers to explain the world. It was too much. If you had never read the books then you would be lost. If you had, then you would be pissed about the multiple changes made from the book, most specifically a machine called the Weirding Module, as well as the ending. Who was the audience for this movie? Away it would go, quietly from the theaters and into the VCRs of a generation of science fiction-starved children. Eventually, in the mid-90s, a cable station would come about to scratch the itch of a world without any new Star Wars movies, and they were going to produce their own TV adaptations of Frank Herbert’s books.

The Sci-Fi Channel released the miniseries of Dune in 2000. While it was more faithful to the books in many ways, it also fell short in design and special effects and had a somewhat weaker cast. While Lynch’s film succeeded from the first scene in capturing the far flung future world and all of its alien qualities, the miniseries required more of a stretch of the imagination. For starters, the costumes looked like something stolen from the backstage of a high school play. Still, it played out well enough that an adaptation of the sequel, Children of Dune came out in 2003. Since then, nothing has been released, and it appears that nothing is being planned.

Dune is complicated. It is an epic tale that focuses on many different groups of characters. The story basically boils down to the noble House Atreides versus the foul House Harkonnen. There are other players involved as well, including the Emperor Shaddam IV and his armies siding with the Harkonnens against House Atreides. There are also the Fremen, the inhabitants of Arrakis (aka Dune), a planet loaded with the “spice” melange, which is the fuel of the galaxy. And then there are sand worms, and a prophecy involving a savior (who is the protagonist Paul Atreides?), a Holy Jihad and a wild card group called the Spacing Guild. THEN there’s the whole backstory about the witchlike order of the Bene Gesserit sisterhood butting heads against the logic of the Mentat order because of a war against machines and robots from many years before. It all leads to something that a two-and-a-half or even six-hour movie can’t do justice to. 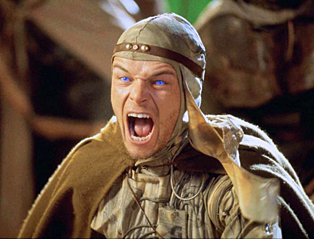 Can Dune be adapted, though? Sure, although the problem is that it would have to be a pre-fab movie trilogy like Lord of the Rings or Hunger Games. Trying to release it for TV would probably be too costly, and the fact is there may not be the audience for most stations (even HBO) to commit. However, this may also be the case with a film series, as the built-in audience is basically just a bunch of random 30 year olds who were infected by the spice-like hallucinatory qualities of the Lynch movie (and the book fanbase of course). Mainstream audiences may also be turned off by what could be interpreted now as a loose allegory for the Middle East, controlling the world’s oil supply and basically overcoming the ruling powers.

Should Dune be adapted? It’s a tough call, but I’d say yes – only not right now. In the modern day, any science fiction property tends to be either one-off or a franchise. While a Dune franchise is possible, the series is too much of its own non-traditional beast to play with producer expectations, and certain current trends need to die down first before a move is made. It doesn’t help that there’s another wave of Star Wars movies coming out to play with those trends.

Will it be adapted? Most likely. I hope it’s by a director with a passion for the books and exists in a future when it can be created from scratch without the influence of what came before. Well, maybe some of the set and costume design can be borrowed from the Lynch movie.