Christmas is over, the presents are opened, the cookies eaten. It is now time for reflection.

The end of the year is quickly approaching and, while Team Unwinnable will soon be celebrating the best 2010 had to offer, we want to kick off the last week of the year with a catalog of the very worst things we had to suffer through. Here, then, is the best of the dreck:

Non-event of the year: The Beatles on iTunes! Almost as exciting as if a supermarket refused to carry Heinz ketchup for some stupid reason, and then all of a sudden they did! I celebrated the occasion by going to a public library, borrowing the entire Beatles catalog on CD and ripping it for free. You can probably do the same!

The Rivers Cuomo “You think THAT was Bad?” Award: Liz Phair’s Funstyle
Are you a Liz Phair fan who got upset when she abandoned her low-fi sound to work with mall-pop production team The Matrix? Well in 2010 Liz Phair decided she was going to REALLY give you something to cry about with a song entitled “Bollywood”. Never mind aping Avril Lavigne, now Phair is attempting to fucking rap. I’m not even going to post a link to this one, but you can find it on YouTube.

[Editor’s Note: Nobody at Unwinnable, LLC was willing to watch Jonah Hex or The Last Airbender, so you’ll get this scathing review of Tim Burton’s Alice in Wonderland and you will like it.]

Worst Movie to Become One of the Top-Grossing Movies of All Time in 2010
Apparently the film industry hasn’t been hit THAT hard by the recession, because 2010 saw TWO movies enter the top-10 grossing films of all time list! Toy Story 3 took the #5 spot, while a slightly less-deserving movie was right behind it at #6: Tim Burton’s Alice In Wonderland, a movie that took a huge budget and an interesting cast and wound up turning it into something improbably boring. 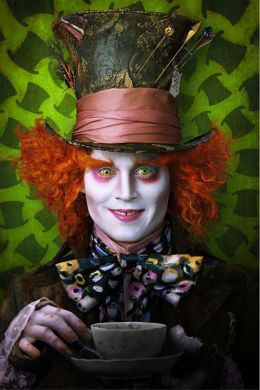 Say what you will about Depp’s Willy Wonka – and would I definitely agree if you said that the best thing about it is that it somehow makes Gene Wilder’s version seem even cooler – but Depp DID at least come up with some kind of a character, or at least a wacky speech affectation, which is good enough for a 21st century Tim Burton movie. Depp didn’t even manage to do that much with this role, which the AV Club’s Keith Phipps accurately described as a “not-that-mad, intermittently Scottish Mad Hatter”.

I would say they should have given the part to someone truly crazy like Crispin Glover, but whaddya know, apparently he was actually in the movie! I can’t believe I almost forgot his indelible turn as a bad guy with a scar on his face who mumbles evil things and rides around on a talking horse. A TALKING HORSE! Wonderland is a crazy place. Come on, Crispin! I mean, I know you only take on roles like this to fund your side project, but could you bring a LITTLE enthusiasm? At least they let ya look cool! Glover could’ve easily been the most interesting thing in the movie, but as it is he kind of fades into the (shitty-looking) background.

Seriously, someone needs to keep Tim Burton away from that CGI machine. As shitty as CGI can look in the hands of most directors, it’s especially tragic when Tim Burton relies on it. His visual style is way, way, WAY better served by jerky stop-motion and rickety sets than shiny digital landscapes. The Alice in Wonderland world is big and detailed, but none of it looks nearly as impressive or, more importantly, as Tim Burton-ish as the sets from Beetlejuice, a movie that, in retrospect, probably hit the sweet spot between Tim Burton and big budget.

Best/Worst Lost Finale: “The End”
Damon Lindelof and Carlton Cuse have said that Lost is all about the characters, which is probably the kind of thing we’d hear every show runner say, if anyone cared enough to interview them. But few show runners have been as recognizable as Lindelof and Cuse, and few characters have been treated with the tender loving care afforded to the survivors on Lost. We could get into an extremely long discussion here about whether or not the characters on Lost really deserve to be lavished with such attention, but I’ll just say that I probably would not have watched a hospital drama starring this rag-tag bunch of misfits and leave it at that.

All the same, by the end of the show’s run I had come to like most of the characters, and I cared about what was going to happen to almost all of them! To that end, I think the finale was a success. They managed to give every major character – including some of the ones who’d died in the show’s main continuity – a big send-off, and most of those worked pretty well! I’m just not entirely sure how I feel about the path they took to get to there.

Like a lot of people, I had an inkling midway through the season that the flash-sideways were some kind of epilogue or an afterlife and I was sorta hoping that wasn’t the case. But, having chosen to go in that direction, I think the writers did a decent job. I can totally understand being disappointed with the final Lost episode, but I think that it succeeded on its own terms. 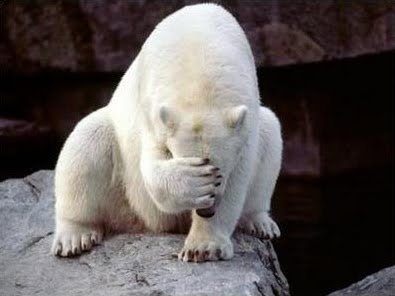 Of course, not everyone agrees with me. Take Unwinnable head honcho Stu Horvath, for instance:

“I can think of no greater betrayal of an audience by a group of creators than that poisonous trash we collectively were forced to choke down in the Lost series finale. Instead of giving the show’s intriguing mysteries (you know, the good part) their due, Lindelof and Cuse chose rather to cling to the laughable notion that their core audience truly wanted to honor the memory of the cardboard cutouts the show insisted on calling characters. You want a show about characters? Go watch Mad Men and get the hell out of my weird science fiction pulp Gilgamesh Twilight Zone mash-up.

Ugh, I can’t even bear to get into the awful, heavy-handed religious schmaltz of the last 30 minutes.

Bottom line: the worst thing about Lost isn’t that the finale sucked harder than a black hole. It isn’t that Lindelof and Company weren’t the clever writers we thought they were. It’s that we, the fans, let what we hoped Lost could be blind us from seeing what Lost really was: a long con.”

Worst Lost Replacement: The Event
Even before it ended its run, many other shows attempted to carve out a chunk of Lost‘s dedicated fan base. Heroes was probably the most successful homewrecker, luring loyal fans away with fast pacing and evident forethought (in the first season, anyway). ABC themselves planned ahead for their post-Lost predicament with FlashForward, but the show didn’t manage to outlast Lost, much less replace it.

So now the divisive finale has aired, and millions of obsessive fans are left hanging without a serialized sci-fi/drama to watch! Enter The Event! The Event barely conceals its intent to be the next Lost, using familiar-sounding music cues and a fragmented narrative structure. But it has one major thing missing: it’s not addictive!

I watched a few episodes of The Event, and they were fine! Jason Ritter was fine as the everyman protagonist, Laura Innes was fine as the (clearly Ben Linus-inspired) enigmatic leader, and the requisite plot twists and cliffhangers were (for the most part) fine! The episodes of The Event I watched weren’t the greatest hours of television I’ve ever seen, but I had an OK time watching them.

…But then I missed an episode or two and I didn’t really care. So that’s the end of that! Maybe on DVD it’ll be pure genius… 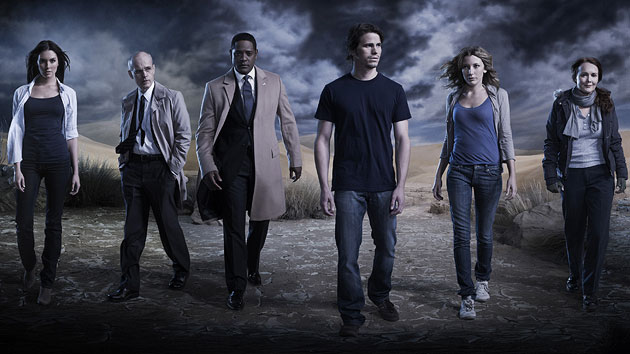 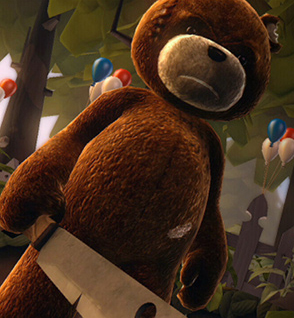 Bad videogames are a dime a dozen. Wii shovelware, ill-conceived indie titles, broken blockbusters – they are all so mediocre in their not-good-ness. It takes a special kind of awful to stand out from the pack. No game better exemplifies that putrescence this year than Naughty Bear.

The rundown: you play a teddy bear who wasn’t invited to play with the other teddy bears. He is so offended, he hunts the offenders down and kills them. That’s right, a team of people spent time and money making a bowel movement of a game in which you play a stuffed animal killing other stuffed animals. They seem to have thought that high concept was more than worth the price of admission on its own, because they didn’t even bother to finish the other aspects of the game. You know, gameplay, camera, level design…all the game parts.

The end result is puerile, unplayable garbage. Seriously, after playing my copy for about two hours, I pitched it right in the trash. (Stu Horvath)

Worst Unasked-for Re-Imagining of an Iconic Superhero: Superman: Earth One 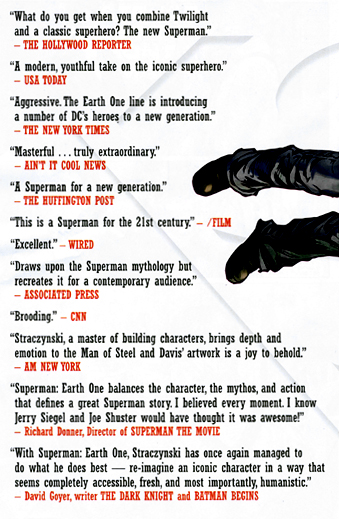 To the right is half of the advertisement for Superman: Earth One that DC Comics has been running in its monthlies since the hardcover hit shelves (the other half  of the ad is some scruffy fellow hanging undynamically in the air – it doesn’t look anything like Superman, so you aren’t missing anything). You would think, reading most of those blurbs, that this a really fantastic graphic novel (mostly, anyway – I am not sure the Hollywood Reporter meant that Twilight comment in a positive way).

Don’t be fooled. I’ve read it. The only way I can make sense of those rave reviews is to assume the writers were all dosed with horse tranquilizers, hadn’t seen their families in weeks and were possibly fearing for their lives.

Earth One is the perfect picture of a poorly realized re-boot. It is laughably brooding, suffers under the strain of terrible (TERRIBLE) artwork and features a villain sporting metal angel wings and juggalo face paint. It is about as edgy and fresh as yogurt left out in the sun.

DC Editorial announced that, due to the book’s successful sales, writer J. Michael Straczynski was being pulled off his simultaneous runs of the monthly Superman (heavy handed) and Wonder Woman (atrocious) to concentrate on a sequel, so that is kind of a blessing in disguise, but he should really try concentrating on writing a worthwhile story. (Stu Horvath)

Worst Part of Jonathan Franzen’s Freedom To Read While Sucking on a Ring Pop: The scene in which young Joey, who accidentally swallowed his wedding band, is forced to sift through his own fecal matter in order to find said ring will likely spoil your enjoyment of any giant, diamond-shaped hard candy attached to a plastic ring.

Alice in Wonderland, Lost, Spider-Man Turn Off The Dark, Superman