Last week, Titan Books released Battle Classics. A collection of war stories from the British weekly comic series Battle, Battle Classics is curated by one of Unwinnable’s all-time favorite comic writers, Garth Ennis. Not only does the book reprint some rare and excellent war comics, it also features a foreword, afterword and essays by Mr. Ennis about his selections. They are insightful looks at not just the stories, but at the times in which those stories were published. 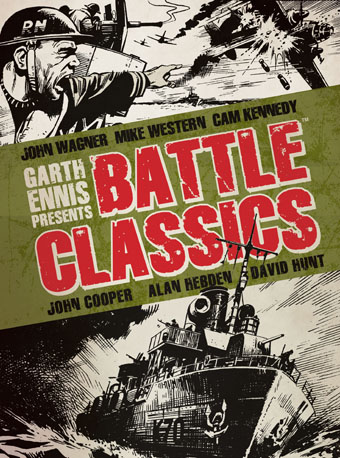 We here at Unwinnable have been fans of Mr. Ennis from Preacher to Battlefields to his recent Fury: My War Gone By. We were thrilled when Garth Ennis himself answered some questions we had about Battle Classics. Without further ado…

Unwinnable: How did you get involved with this project? Did Titan approach you or was it vice versa?

Garth Ennis: Bit of both. I’ve been writing intros for Titan’s superb Battle reprints for some time now, most notably Johnny Red and Darkie’s Mob, and they’re well aware how keen I am on getting this stuff back into print. They knew my next priority was HMS Nightshade, so when they suggested combining that one with other strips as part of a larger collection, I went for it.

Unwinnable: With 13 years of stories to choose from, how did you go about selecting which stories appear in this volume?

G.E.: With Charley’s War, Johnny Red and Darkie’s Mob already reprinted, I wanted to get the rest of the very best Battle material out there alongside them. I regard HMS Nightshade and The General Dies At Dawn as absolutely superb stories, more than deserving of such illustrious company. I rounded out the book with three short stories drawn by Cam Kennedy – his art makes them much more than mere filler, and the third one in particular is one of the best short stories I’ve ever read.

There is of course a lot more great Battle material that could be reprinted- things like Crazy Keller, Death Squad, The Sarge, the last series of Rat Pack and Hellman, among others – but I wanted to focus only on the truly excellent. Finally, it was important that the stories appeared in complete form, rather than in a Best Of sampler – to my mind, complete beats best of any day of the week.

Unwinnable: The stories in Battle Classics have a gallows humor and a cynicism about them that was not present in their American contemporaries. How does it feel to be a part of bringing these stories to a new audience?

G.E.: Mainstream American war comics – Sergeant Rock and so on – always seem a little odd to me, not much more than superhero stories in uniform. You do get some slightly darker material in things like Blazing Combat, but I think Battle Classics will show people a side of war comics they may not be expecting – and indeed, a side of war they may not be familiar with at all. The Arctic Convoy battles depicted in HMS Nightshade feature combat in probably the worst conditions on earth, and The General Dies At Dawn is told from the point of view of one of Hitler’s Generals. 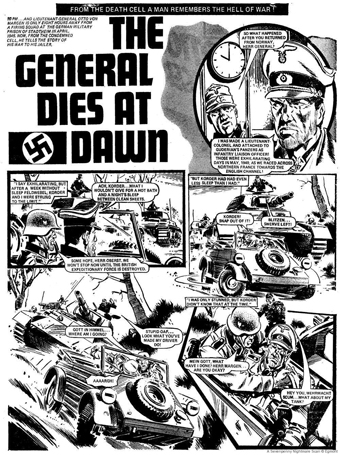 Unwinnable: How much of an influence has Battle had on your work over the years? Is it something you go back to a lot for inspiration?

G.E.: Very much so. Its influence on me seems to grow as time goes by; whereas its sister comic 2000AD meant a lot more to me when I was younger, the sci-fi and fantasy stories of that title are now giving way to the reality-based material represented by the best of the Battle tales. More directly, concepts I first ran across as an eight year-old reading Battle have stayed with me, and I’ve tried to do my own take on them – the Camship fighters and Soviet women aviators of Johnny Red in Archangel and The Night Witches; the horrifying naval warfare of HMS Nightshade in Nightingale.

Unwinnable: From Vietnam in Preacher, World War II in Battlefields series and so many more, War has been a prevalent theme in your work. What is it that draws you, as a storyteller, to war?

G.E.: There are things that happen out on the most violent edge of human experience that eclipse fiction by their sheer intensity – that you simply could not ever invent. The many accounts I’ve read of human experience in wartime reveal degrees of courage, cruelty, cowardice and even kindness that are beyond imagination. Next to that, fantasy means almost nothing.

Now Ian knows what comics to dig for the next time he visits the UK. Follow him on Twitter and maybe he’ll post a pic (he probably won’t though – those data charges are insane).

In Other Comic News