OK, so I lied a little. This may not be the help guide you’re looking for in getting your significant other to play videogames with you if he or she doesn’t do so already.

I can hardly get mine to play with me, so who am I to advise you?

Still, I may have an alternative. If you’re lucky, very very lucky, you may have a loved one who will watch you play videogames.

I have that great fortune in my little sister Becca, who back in the day not only would watch me play – it’s awesome to have company, especially with so many engrossing, one-player experiences you just can’t share with others – but she would look forward to it.

I didn’t take that for granted – she cheered me on, got excited as new levels unfolded and would help me out when I got stuck – but other than her telling me it was “fun,” I never really asked her exactly why she was so on board with never even touching the controller.

Now, years later, I write a column for a videogame site, so I decided to find out – and possibly inspire some new watchers, or to coax some closeted watchers into coming out. 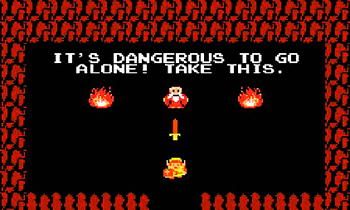 Here is her response:

You may wonder why anyone would willingly spend hours watching someone else play videogames. Well truth be told, it’s pretty awesome.

Wait, wait – I’m not lying and I do have a life (and friends). There are many benefits to watching others defeat imaginary creatures, collect stars or weapons and beat level after level.

So to convince you, I’ve compiled a short but hopefully compelling list for giving videogame watching a try.

Reason No. 1: No pressure. Sit back, relax; you have absolutely nothing at stake. The person could epically fail and it’s not on your conscience, nor do you have to strategize on how to do better.

Reason No. 2: It’s like watching a choose-your-own-adventure story (well, if you’re watching Legend of Zelda, at least). Sometimes if the person playing (your “storyteller”) is friendly enough, he or she may even take your input (thanks to my brother, this often happens when I watch him).

Reason No. 3: You can be supportive without actually having to move, clap, wave your hands or do cheers. I like to think your presence is an unspoken advantage – like all those other people
who play by themselves don’t know about the secret cheerleader weapon.

Reason No. 4: It’s awesome bonding time. Nothing is cooler to a little sister than being included in their big brother’s life, even if it includes watching him play the same level over and over and over and … OK, sorry, Matt. 🙂

So I stress to all of you who knock the pastime of videogame viewing to try it. Stop reading this article, call your brother/friend/boyfriend/girlfriend or whomever and start watching!

That was a pretty awesome answer, right?

I’m not gonna muck it up with any further comment.

Rookie of the Year: Who Wants Their Girlfriend’s Mother To Be A Millionaire?
Previous Post