There are two rough types of videogame prologue. First is the “Modern Warfare,” where the opening section of a game is packed with action, spectacle and explosions designed to whet players’ palates for what’s to come. This works basically like a movie trailer, condensing the largeness and excitement of the game proper into one tight, impressive vignette. Uncharted 2‘s train, Black Ops‘ Cuban compound and the God of War series – these games, and frillions of others, belong in the “Modern Warfare” category.

The highest achievement in TLOU‘s prologue, though, is getting you to … care about … a child character.

The other category is hard to credit to a particular game, so I’m just calling it the “Straightforward” prologue. It’s geared towards teaching players mechanics. You know that training section in Killzone 3 and the opening villa level from Hitman: Absolution? That’s what I’m talking about – basically tutorials dressed up in enough patches of action and story to stop them from being boring.

The prologue in The Last of Us doesn’t fit these categories. In fact, it’s unlike any prologue I’ve ever seen in a videogame. What’s unique about the opening of The Last of Us is how it introduces things that will be paid off later in the game.

Dramatists call it “Plant and payoff” – the idea of introducing a story or character element at some point in the fiction, then resolving it later. Ron Burgundy in Anchorman always reads what it says on his teleprompter (plant), which later gets him fired when he accidentally says “go fuck yourself, San Diego” on air (payoff); Morgan’s asthma (plant) in Signs saves his life later on when the aliens try to gas him (payoff). People also call this the Chekhov’s gun trope. Basically, any character beat or narrative hint that’s made early on will come full circle later.

TLOU gets this. Rather than an empty fireworks display or a cold tutorial, its prologue forms the bedrock for the rest of the game’s story and character arcs. Let’s start with clocks.

Stick TLOU in and click “New Game” – the first thing you hear, behind the “Sony Computer Entertainment presents” title, is a ticking clock. Clocks are important in The Last of Us. At the start of the prologue, when the world is running as normal, clocks run normally, too.

But this is the last time we see or hear running clocks. Though they’re everywhere in the post-apocalypse world, on walls in bars, garages and abandoned houses, none of them are running. And these aren’t just bland assets repeated by level designers – the clocks in The Last of Us are all stopped at different times. That opening sound of the clock is the plant, a symbol that everything in this world is “running like clockwork.” The dead clocks later are the payoff. They represent a dead, finished world where time has stopped. It’s just a subtle little hint, but when you consider that time, in a sense, has also stopped for Joel – since he’s unable to move past the grief about his dead daughter – these clocks speak volumes about the game’s story.

Joel’s daughter, Sarah, is also of massive importance. Her presence in the prologue helps set up the necessary emotional framework for players. 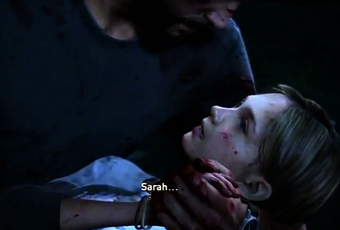 You start TLOU playing as a 12-year-old, and that means you’re vulnerable. When the first “zombie” comes, you’re not fighting it; you’re Sarah, tucked behind Joel, hoping he’ll deal with it for you. This is basically the opposite of a lot of videogame prologues, which often deal in spectacle and empowerment. This is you scared, defenseless – it’s the perfect first glimpse of a world that the game’s creators want you to be shit scared of.

Remember the first time you faced a Clicker properly? How fucking scary was that? And it was because, in the prologue, when you first encountered them, there was nothing you could do to stop them. You were just this 12-year-old, in your pajamas, in the middle of the night.

Even when you take over as Joel in the prologue, you’re running away from the Clickers. When one of your earliest interactions with a game’s enemies has you fleeing from them, your instinct later isn’t going to be to turn and fight; you’re going to want to run and hide, like what you did the first time. It’s almost like in one of the “Straightforward” prologues I mentioned before. The opening of The Last of Us is at least somewhat of a tutorial, except the tutorial’s advice isn’t “attack armored enemies from behind” or whatever, it’s “run for your fucking life.”

And that’s the plant – TLOU‘s prologue tells you Clickers are something to be scared of or avoided, rather than confronted. It’ll be paid off countless times later on, either when you remember that the best way around them is to sneak, or when you’re sitting there, surrounded by them, experiencing some of the most effective horror gameplay ever.

The highest achievement in TLOU‘s prologue, though, is getting you to empathize with – nay, care about – a child character. For obvious reasons, this is important later; when you, as Joel, team up with Ellie, it’s kind of vital to the whole dynamic that you care about her safety.

Now, that’s not an easy thing to achieve. By no fault of Naughty Dog’s, people want child characters in videogames as much as they want mice in cereal. Child characters have bad dialogue; they’re boring; they’re vulnerable. When a child gets on-screen in a videogame, it’s usually a signal that we’re about to hear some shit one-liners or start an escort mission. They’re a bad omen.

But The Last of Us hinges on us liking – loving, even – the child character. The prologue, once again, lays the foundations for this.

It’s a simple device, I guess, but just having us play as Sarah is tremendously powerful. I think of film and game audiences as newborn birds – whoever we see or play as first, we’ll identify with and latch onto. It’s why Marion Crane’s death in Psycho is so traumatic. She’s the one we connected with at the start. 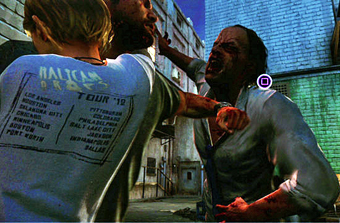 The same goes with Sarah. By having us play as her at the beginning of the game, TLOU bonds us with her. The first things we feel are her vulnerability, her fear, her childishness. Later, when Ellie exhibits these things, things that typically bother us about child characters, we understand them. We’re OK with protecting her because we’ve been the one needing protection. We want to be close to her, because she reminds us of a character we’ve met before.

I think the problem with child characters is that they’ve often been difficult to empathize with, because they usually serve some functional comic relief or gameplay purpose. At best, they’re an extremely obvious device used to reflect something about the main character; at worst, they’re just another caveat added into an action set piece.

Not so with Ellie. Playing as Sarah in the game’s prologue lets us empathize with her. It allows us to feel her emotions firsthand, so she doesn’t come over like some deliberate gameplay device. That’s an incredibly valuable thing for The Last of Us to set up in its prologue, and it’s a pretty big leap forward for child characters in general. The opening scene in The Last of Us proves kids in games can actually be done well.

This is what prologues should mean, really. Rather than be banal firework displays or dispassionate instructional videos, they ought to serve a meaningful and complete narrative purpose. A prologue isn’t something games should just do and then throw away – it shouldn’t be treated like some pre-title cold opening from a sitcom. A prologue should set out the tonal, mechanical and narrative stall for the rest of the game; with its ticking clocks, fearful Clickers and empathetic child character, The Last of Us‘ prologue does all this, easing us into the right mental framework to process and understand the rest of the game.

Rookie of the Year: How To Get Your Significant Other(s) To Play Videogames With You