Tarot and euchre are gifts from my mother.

Helen Farley, in her book A Cultural History of Tarot, says there is a “familial relationship between” the cards used in the 15th century tarocchi game and popular divinatory decks, such as the Rider-Waite. She argues the first standardized deck was created for Francesco Sforza and his wife, Bianca Maria Visconti.

Unlike the wealthy Visconti family, my Italian-American mother and I played with cheap cards, drugstore decks. We always had enough money for food and rent, but little money to spend on anything else. So, my mom taught me go fish, rummy 500, and my favorite game – euchre.

Euchre is a game of trumps, like tarocchi. The Tarot deck introduced more trumps – the Major Arcana – to the standard 52-card pack. In both games, higher trumps allow players to take tricks, and both involve chance regarding which cards are dealt. 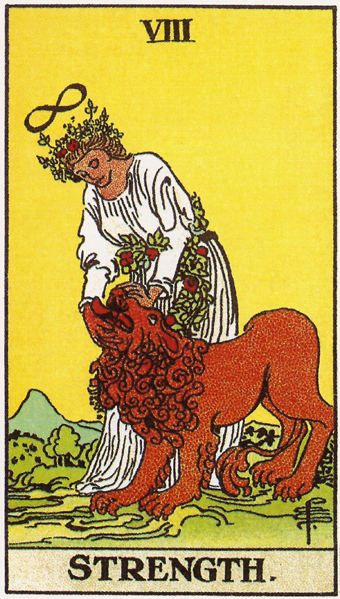 One day, instead of dealing cards for euchre, my mom simply shuffled and pulled a single card. She sat across the table and asked me to guess her card.

I looked into her brown eyes, trying to understand what she was communicating non-verbally. I saw the word ‘cat’ in my mind.

“Cat?” I thought. “What card is that?” The word cat became an image of the calico we got when I was six – a singular cat.

My mom nodded. “Try for the suit.”

Again, the image of our cat came to my mind. I remembered that she was fixed.

My mom nodded again and handed me the ace of spades.

Was this a game? Was this magic?

In her book The Spiral Dance, Starhawk says that the “sense of humor, of play, is often the key to opening the deepest states of consciousness.” The game is a gateway to magic. Playing in the world of signs (connecting signfiers and signifieds) – of symbols – is a path to esoteric knowledge.

At some point after this card-guessing game, my mom got me the Aquarian Tarot. The cat symbol (sometimes a lion) was already in the art. I was no longer guessing the identity of a hidden card, but the thought process was often similar. Associations and patterns emerged from the cards like word games, like poetry.

It was like looking across the table at my euchre partner and knowing that we could take enough tricks to win. Knowing that she held the trumps we needed.

Generally speaking, there are two schools of thought regarding the origins of Tarot: modern historians (such as Farley) trace the deck back to renaissance Italy and occult scholars (such as Crowley in the Book of Thoth) look for a more ancient—and specifically magical—source, usually Egyptian. The mundane game of tarocchi is not considered esoteric; it is argued that she only produced divinatory children, the eldest of which is usually thought to be the 18th century Tarot de Marseille.

However, I think the mother – tarocchi – is also magical; a game can reveal the unseen through patterns and associations created by chance. A symbolic text can be found in even those drugstore cards my mom would buy us; shuffling and dealing can become a tool for unlocking more states of consciousness.

Rookie of the Year: How To Get Your Significant Other(s) To Play Videogames With You