Who wants to be a millionaire?

But if the only way that is going to happen for me is to appear on a TV game show, well, I am resigned to a lifetime of relative poverty.

But I may have a secret weapon: 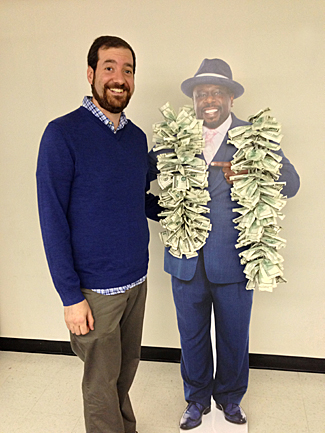 The Girlfriend of the Year’s mother, apparently, is a trivia genius, so when she invited me to attend a recent taping of Who Wants To Be A Millionaire? with her up in Harlem, I figured I couldn’t miss it.

Part of the deal? A quiz and personality screening – with a chance to earn a callback audition to be a contestant on the show.

And, of course, cash money!

I participated as a lark. Full disclosure: I am a Disney employee and hence ineligible.

But as long as I was there, I made sure to fill out the form with as much gusto as I could muster. And I even bought a new sweater to appear as if I were a respectable citizen – “a more dapper Mr. Rogers,” according to my friend Liz.

I cheered like a maniac during the taping, too. I pretended Cedric the Entertainer was on my personal celebrity A-list, perhaps even one of my heroes, as he brought the show into and out of commercials.

And I laughed at all his jokes – the way I sometimes laugh at my own.

Before the taping began, however, it was far more solemn in the studio.

We were handed multiple-choice tests and Scantron sheets – yes, they still make them, and, yes, they haven’t changed one bit since you were in high school.

I took the exam, flat-out guessing on some of the tougher questions – what does the French term for window-shopping literally translate as? – and laughing at the simplicity of some of the others.

I wasn’t embarrassing myself, but I sure wasn’t making much of an impression, either.

Still, little did I know that right next to me, my girlfriend’s mother was busy making the test her bitch.

After the taping, one of the producers read the names of those who’d aced the exam.

My own efforts wouldn’t be enough; whatever I scored, it wasn’t high enough to earn an interview.

But I didn’t feel the least bit humbled.

Because in a room of a couple hundred people, only a handful of names were called.

As it turns out, it wasn’t the first time she’d earned an interview; she passed a similar test in Philly when the show went on the road.

And it probably won’t be the last.

But don’t look for her on the show quite yet. She’s yet to earn a callback.

For me, it’s essentially impossible. Waiting for her in the lobby with my free T-shirt while she spoke to a producer was as humbling as it was thrilling.

Even if I failed, I’m rooting hard for her to make it on the show someday.

Matt Marrone never actually turned in his application. But in case ABC is wondering, if he was chosen for the show, he’d be most likely to… “pass out in front of a live studio audience.” You can follow him on Twitter @thebigm.

Cedric The Entertainer, Who Wants To Be A Millionaire?