The more I grow up, the more my tastes mature, the more convinced I become that The Golden Child is the greatest movie ever made.

Essentially, an at-the-top-of-his-game Eddie Murphy is placed into the world’s shittiest film – a monstrosity that began as a serious action thriller starring Mel Gibson but was converted at the last minute into a comedy farce – and is given free rein to make fun of it for 94 minutes, a performance that is entirely epic, even if you can’t suspend your disbelief – but beyond profound if you can. 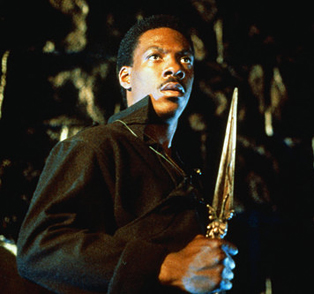 Because if you believe Charles Dance – who really should be knighted for his performance as Sardo Numspa – truly is a demon walking the Earth, then Murphy’s flippant attitude toward him becomes arguably the single most absurdly brilliant bit of (unintentional? accidental? serendipitous?) filmmaking in the annals of cinema. One minute, Dance sits yoga-style as the walls tear away all around him and he is transported to the very depths of hell, communing with Satan himself on a dastardly plan designed to rain terror upon mankind – and the next he is at L.A. International Airport being openly mocked by a stand-up comedian, who, in the role of Chandler Jarrell, greets him with the widest of grins, hugging him and calling him brother in a silly but ultimately successful attempt to recover a sacred dagger that, if you can accept it, is the only earthly weapon that can keep a small, mystical Tibetan boy (played by a girl, J.L. Reate) from saving the world.

Sardo Numspa: You’ve no idea who I am, have you?
Chandler Jarrell: Yes. You’re Sardo Numsie. Ha-ha-ha. Look, I don’t care who you are. I do care that you kidnapped a little kid, though.
Sardo Numspa: I could destroy you … [Snaps fingers] … just like that.
Chandler Jarrell: We wouldn’t want that. Listen, bring me the boy, and I’ll give you the knife. And then no one will have to be destroyed … [Snaps fingers] … jus’ like that.

With the police dangerously close to seizing the dagger from both of them, what does Dance do but stand there, stiffly and awkwardly, as Axel Foley makes a fool of him?

In an earlier scene, a stunned airport security team in Kathmandu watches as Murphy, pretending to be a Customs agent, holds said knife aloft and cheers, “Viva Nepal! Viva Nepal!” Except unlike one of the soldiers, who, in his confusion and powerlessness, decides to join in on the fun and let a big ol’ smile cross his face, Dance has all of the powers of the underworld at his disposal, and should he decide it prudent, could sprout wings, burst from his human shell, breathe flames directly into Murphy’s gob, melt his skin right off his skull, and then utterly lay waste to the entire city, and then to the world.

But he can’t do it. Because Eddie Murphy’s contract won’t let him.

The Golden Child is just that good. 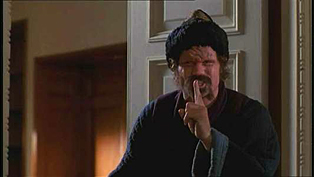 All of that only makes it more painful for me to admit the following: The Golden Child does not have the best movie soundtrack of all time.

In fact, it’s rather awful.

Which is why the $5 I paid for it on eBay – on vinyl, still in the original plastic wrapper – has to be considered top dollar.

Still, I’m more than satisfied with my purchase – if nothing else, the collage of movie stills on the back (Numspa and his goons, Murphy reaching into the fire for the aforementioned Aja-Yee Dagger and a larger Murphy reaching out his hand as if he’s about to squash his own head) makes it worth every penny – and I’ve decided to review it, train-of-thought style, as I sit here, listening to it for the very first time.

The Best Man in the World – Ann Wilson

The first of four “hits” on the album (according to the sticker tease on the plastic wrapper), the Heart lead singer’s offering provides the background to the film’s opening credits – you know, the part of any film you can barely remember years later because you always seemed to catch the movie partway through when it showed up on WPIX. This is not a good song by any stretch, but it instantly reminds me of Murphy’s character making his way around L.A. and establishing him as a do-gooder who actually is, as the film will prove, the best man in the world.

We should all strive to live up to the ideals of this song, though we should not emulate it if we happen to be musicians.

Another “hit,” this is essentially every Whitney Houston song you’ve ever heard. Which makes me wonder why, with Murphy’s star power, they couldn’t get the real deal.

I think this song could have a second life as the theme music for a Dr. Phil special on BET. Also, because it was the 1980s, they strap on the saxophone – and they don’t hold back.

I’m going to have to watch the movie again soon, because I’m ashamed to admit the love theme – the love theme! – doesn’t really ring a bell. Perhaps it was playing really low in the background, or, more likely, it was during a kissing part that I’d fast-forward through. That being said, Love Goes On makes Celine Dion’s My Heart Will Go On sound like a pretty good song. That tells you everything you need to know, although there’s some woo-ing at the end that is kind of nice – and probably could get a girl’s panties off if she already really likes you and is sort of into irony. 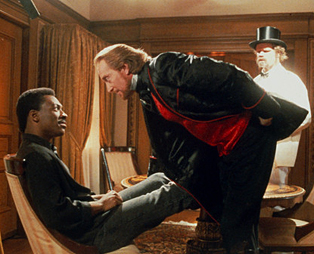 Shame On You – Martha Davis

This one I remember, mostly from the first few seconds. The chorus, though I’m pretty sure it never appears in the film, could be described as catchy in sort of an I’m-just-getting-over-a-cold-and-probably-not-contagious-anymore kind of way. But still, I’m looking at the photo of Murphy using a chair to ward off blows from a knife-wielding assassin in a Chinese restaurant on the back of the record sleeve and singing along like it’s my favorite song in the world.

Everyone who has seen The Golden Child – none of you have, but just trust me – knows this as the music blasting in the biker hangout when Murphy goes to save Kee Nang, his Tibetan love interest played by Charlotte Lewis. By no means my favorite scene in the film, it does feature Murphy, at one point, vaulting over a wall and ending up in the middle of some innocent bystander’s backyard family barbecue – where he proceeds to help himself to some potato chips, at gunpoint.

(Let Your Love Find) The Chosen One – Marlon Jackson

Side 2 is mostly composed of instrumentals – apparently there was some drama over the score (Mel Gibson/action thriller, remember?) and more than one composer wrote music for the film, something I’d describe here in more detail if I hadn’t skimmed past that portion on Wikipedia – and 30 seconds into Jackson’s “(Let Your Love Find) The Chosen One,” I am already deliriously awaiting it. To call this a poor man’s Michael Jackson song would be like digging Jacko up and desecrating his corpse.

The Chosen One – Robbie Buchanan

Yes! Now we’re cooking with gas. This is The Golden Child! Aside from my old Kraftwerk records, no bit of hilariously dated electronica tugs at my heartstrings quite like Buchanan’s offering, written by Michel Colombier (see below). True, it could have provided the soundtrack for every ’80s action comedy film – and may have, for all I know – but to Golden Children such as myself, this is right up there with the Star Wars theme.

Sardo and the Child – Michel Colombier

If “The Chosen One” is the Star Wars theme, then Sardo and the Child is the “Imperial March.” This introduces Sardo at the start of the film – the ultimate film comedy bad guy (Charles Dance deserves a posthumous Oscar, even though he’s still alive) braving a blizzard to break into a Tibetan temple and kidnap the Golden Child. If only he were Eddie Murphy’s father! 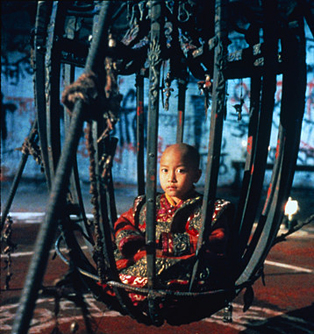 This will be my wedding song. No, seriously, it won’t be. I just really wanted to say that. But now that I think of it, I need to work this into the reception somehow. No one will make the connection, or even notice it’s playing, but I’ll know. And if my bride-to-be isn’t winking her ass off, I’m taking the ring back.

Another classic Golden Child riff. How can something be so funny and yet so poignant? Are all of Colombier’s works like this, or did he simply stumble upon unadulterated genius just once in his life and has been struggling ever since to recapture it? I picture him in southern France, soaked in wine on the back porch of his family vineyard, perfectly benign until someone accidentally mentions The Golden Child, at which point he begins to froth at the mouth and tear into a murderous rage. I’m gonna have to look him up, once I find a hankie. (Update: He was actually a rather accomplished musician. And he died in 2004.)

Wisdom of the Ages – John Barry

I was looking up Colombier when this was playing, so I didn’t really pay it much mind the first time through, so I’m breaking my rule and spinning it again. But while it actually might be the single best piece of music from the soundtrack – speaking academically, of course – it doesn’t bring to mind a whole lot of memories, especially because Barry apparently originally scored the entire film during The Mel Gibson Epoch, before it was wholly scratched in favor of Colombier. But I might actually listen to this piece in the future, not so much as a Golden Child fan, but simply as a fan of music. It’s kind of beautiful – and it’ll be fun to play for people who will admit to being moved by it, and then look them deep in the eyes and say THAT WAS FROM THE GODDAMN GOLDEN CHILD SOUNDTRACK, YOU ASS!

And there you have it, the substandard but unforgettable soundtrack to the 1986 film, The Golden Child.

The greatest film of my lifetime.

Matt Marrone may seem like he’s being ridiculous on purpose. For once, he is not. The Golden Child deserves every award it has ever won. You can follow him on Twitter @thebigm.
For those of you who have long since forgotten The Golden Child (or were unfortunately born post-’80s), please enjoy the goodness of the original movie trailer.

Movies, Rookie of the Year

Rookie of the Year: The Shining and Alex Colville