Tom sighed as the chaos erupted around him in the grocery store. People swept whatever they could off shelves into grocery carts. The floor was wet with the contents of Lord knew how many broken bottles, and when people slipped and fell they cut their hands and their blood contributed to the mess.

Tom shifted the baseball bat in his right hand and briefly considered looking for a can of peaches, but they were probably gone anyway, and he had the plasticware he’d come for. His bug-out bag had been packed for days, but as he’d prepared to leave Atlanta, Tom had realized that plasticware would make less noise than metal knives and forks. Stealth would be important once he got out of the city.

The zombies didn’t kill you […]. What killed you were all the dumbasses who hadn’t seen enough movies.

The parking lot was a mess of vehicles parked at all sorts of crazy angles to one another. Tom saw someone leave his car running as he dashed toward the grocery store, and saw someone else immediately jump in the car and drive away. A couple of teenage kids were trying to wrestle an old man’s keys away from him, and the old man pulled a gun.

That’s when Tom heard the screaming behind him. Tom turned and saw the ambulance driver shuffling into the parking lot. Someone must have run him over. His left arm was smashed to pulp and it looked like the entire left half of his chest was caved in. The ambulance driver’s DayGlo vest was soaked in blood.

The old man with the gun had also turned at the sound of the screams, saw the ambulance driver and fired a few shots. The driver went down. A little girl had fallen to the ground just a few feet away and started screaming as the man began to get back up. He heard her screams and crawled in her direction.

Tom sighed again and shoved his way through the crowd that was running away from the driver. Tom raised his baseball bat and smashed his skull in with multiple blows, spattering Tom’s jeans and shirt with blood.

That’s when Tom turned around, faced the crowd watching him with horror and finally lost his temper.

“For Christ’s sake, have none of you ever seen a zombie before?”

To be fair, Tom had never seen a real zombie until a few days ago, either. But like the rest of his geek friends when he’d heard the odd news reports about people going insane and attacking their relatives, and the isolated stories of some new kind of disease being reported in other cities, Tom had hit upon the possibility of the living dead pretty quickly. 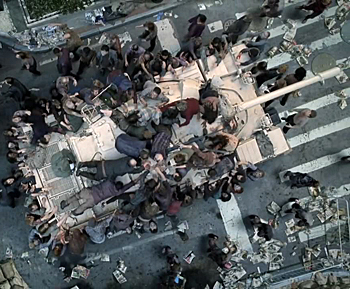 As he walked back to this apartment, Tom passed a woman sitting on the stoop of her building, sobbing while she cradled the head of what Tom assumed was her husband, crimson only seeping now from the gaping bite wound in his neck. Tom didn’t know how long it would take for her husband to turn, but he knew what would happen once her husband did.

“If he was a goddamned vampire you’d know what to do with him, wouldn’t you?” Tom yelled at her. Of course she would. Stake through the heart, sunlight, burn them alive, everyone knew something about vampires.

Tom considered walking over and bashing in the head of her husband’s corpse, but he had to get moving. He had a long ride ahead of him, probably two or three days what with staying off the main roads and taking the right amount of time to find a safe spot to sleep at night along the way.

Tom settled his backpack as he got on the bike and tugged on the handle of the baseball bat that he’d secured to the backpack with bungee cord. The bat wouldn’t get in his way while he rode, but Tom also wouldn’t be able to draw it quickly. But that’s what the bike was for. Not being around to have to fight in the first place.

Besides, Tom could still hear the popping reports of what he assumed were assault rifles and the thunderous booms that he guessed were coming from the tanks that had rolled into the city yesterday. The National Guard was trying to hold Atlanta, and Tom figured the noise would be attracting most of the zombies in the area, leaving his escape route relatively clear for the time being.

Tom thought back to the woman on the stoop as he pedaled and wondered if she and her husband were both shuffling around at this point and looking for someone to eat. People like her were why the city had fallen apart in the first place. Tom had been hoping for days that everyone would get their acts together and realize that a gaggle of slow, shuffling, stupid-ass zombies was manageable. If the zombies had been runners, everyone would have been fucked from the get-go. Shamblers could be dealt with if you got a hold on the problem quickly, before it spread.

Of course, that didn’t happen. So now Tom and his friends were meeting outside the city to head to Rainsville. They were going to hole up with another friend who had a house just enough off the beaten path to be safe for a little while – long enough to plan next moves, anyway. A nerd might not be an expert in weird shit but they were less likely to be caught entirely flat-footed when weird shit blew into town.

“It’s not the zombies that kill you,” Tom muttered as he crossed an intersection. He spared a glance down the long row of city blocks to his right and saw a few zombies in the street far enough away not to be a threat, but close enough to give him reason to pedal harder. 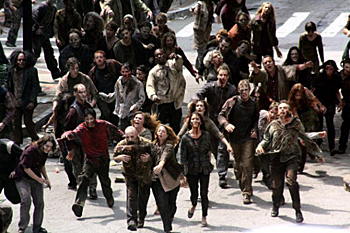 Tom hadn’t bothered to change out of his blood-spattered clothes because it didn’t seem worth the time. He had figured he was going to sweat and probably get dirty during the ride, anyway.

The bullet slammed into his chest and Tom was knocked clear off the bike, which clattered to the sidewalk. Tom looked down at the fresh blood soaking his shirt. He yelled out in anger as much as in pain.

“Oh my God,” came a man’s voice from somewhere above Tom. “I saw all the blood and I thought…”

“I was on a fucking BICYCLE!” Tom screamed. He heard more gunshots, and then a chorus of groans, and craned his neck to verify what he already knew. A crowd of dead people had been attracted by the first shot, and then by Tom’s screams.

Whoever it was with the rifle had crap aim. Tom was losing a lot of blood. He was too dizzy to yell to the man to aim for headshots, but he thought about all the comics, and the movies, and the TV shows, and the characters who couldn’t keep quiet, or who left the door open or made whatever mistake that meant the end for everyone else.

The zombies didn’t kill you, Tom thought just before the first pair of teeth bit into him. What killed you were all the dumbasses who hadn’t seen enough movies.

Dilbert and Harry Potter: Fugitives From the Now
Previous Post