New Detroit. Six thousand square miles of ultra-condensed, residential urbanization blocks. It is the home of 900 million citizens, the home of rampant criminality and the home of the Judges.

Established in 2122, Omni Consumer Products’ New Detroit Judicial Services Inc. (NDJS) was the first government-backed, privatized police force in Greater America. Now, in the year 2171, they are also the most financially successful. Their trademarked Street Judges roam the blocks of New Detroit, dispensing justice as judge, jury and executioner. They’re efficient, they’re reliable and most of all, they’re highly profitable.

The lobby of the NDJS headquarters is the most extravagant single room any citizen of New Detroit would ever see. An immaculate, laminated blue floor covers the ground below, while a high ceiling is held up above by 20-foot-tall golden pillars.

In the center of this gargantuan lobby is the circular NDJS reception desk which seats 30 weary Judges on receptionist duty. Above them, suspended by thick, golden chains, hangs a huge replica of the NDJS Judge’s badge: a bald eagle clutching a Greater American flag in one claw and a Greater America dollar bill in the other. Along its bottom reads the NDJS slogan “From profit, comes peace.”

From this high position, a single Judge can be seen striding towards the reception desk, with the collar of a handcuffed man in each hand.

“H. Siegal and F. Headlands. Guilty of tax avoidance, the laundering of Alaskan dollars, possession of banned VR vid-tapes and indecent exposure in the presence of a Street Judge.” The Judge barked as he slammed the two men’s faces against the desk, revealing the name on his NDJS badge: Dredd.

“All Pat Wagons were and remain currently engaged in the midtown massacre cleanup,” exclaimed Dredd, his hands pressing down on the back of the two struggling men’s faces.

Kings stared at Dredd’s face, which was concealed by his large protective helmet. “Sentence,” Dredd continued, “a 32 million dollar fine and four years in the cubes without parole. Each.” 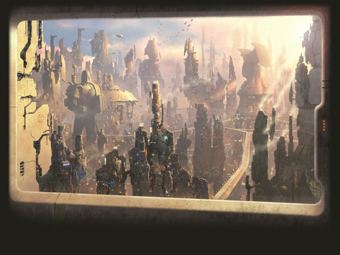 After a few more seconds of staring, Kings’ serious face twisted into a sarcastic one.

“I’ve been NDJS Street Judge of the year for eight years running,” Dredd growled back, “But that’s none of your business now, is it, Kings…” Dredd was cut off by a message coming over the lobby’s tannoy.

“OCP Banking. No repayment too big, no loan too small.” The soothing synthesised female voice was then replaced by the muffled croak of a sore-throated man, “Judge Dredd to level B3 garage. Repeat, Dredd to B3 garage. Supreme Judge Hershey wants to see you.”

But before the tannoy message had even ended, Dredd has already made his way to the lobby’s turbo lifts.

Kings mutters something under his breath before turning to the two dumbfounded men sprawled across the desk.

“So boys, 32 million dollars each. One, will that be paid in cash or by cheque? And two, will you be wanting a receipt?”

Supreme Judge Hershey paced back and forth between Dredd and a heavily armored NDJS Street Cruiser. For reasons unknown she had put the dark, dank garage on lockdown. No one could get in and no one could get out. The two of them spoke alone in the echoing silence of the huge underground garage.

“Then you also know why I allow you to work alone.”

“Exactly!” Hershey exclaimed as she perched herself on the bonnet of the Street Cruiser. “What we need is more judges like you, Dredd. System breakers. Profit makers. Exceptions to the rule.”

Hershey glanced at the floor and took a deep breath followed by an audible exhalation. “Today you’ll be escorting our newest and most exceptional member of NDJS, straight from OCP Sci Division.”

Hershey rapped her fist against the car bonnet. As she stood up, the driver’s door to the Street Cruiser opened. A metallic figure began to emerge from behind the vehicle’s tinted windows.

“He’s NDJS’s most advanced tool in urban pacification.” A grey, metallic figure stiffly and slowly made its way towards Dredd.

“But the boys in the lab upstairs call him RoboCop.”

What, you want more? Go badger Michael @MegaWestgarth and we’ll see what happens…

Episode IV: A New Hope – With a Twist